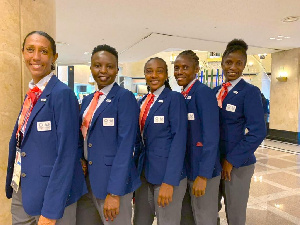 Mukansanga, Kwimbira, and Njoroge also continued to enjoy their fine international spells as they also took charge of the Netherland 8-2 obliteration of China at the group stage on July 27.

In a record third outing, led by the 33-year-old Mukansanga (Rwanda), the same three match officials made history as they became the first African women to officiate a quarterfinal match at the global showpiece at the Kashima Stadium on Friday.

So far at Tokyo 2020, Mukansanga has now officiated thrice as centre referee and a fourth official once, while Kwimbira and Njoroge were chosen thrice as the first and second referees respectively just as Madu (Nigeria) and Maria Rivet (Mauritius) were appointed the fourth officials three times respectively.

The appointments are testament to the incredible rise of African women refereeing, led by CAF, to bring women officials’ skills, experiences, and training to the highest international standards to ensure a better future for the continent

With the group stage exit of Zambia, the sole African representatives, the women referees from the continent will be relishing the prospect of making more officiating appearances as the competition progresses in Tokyo.