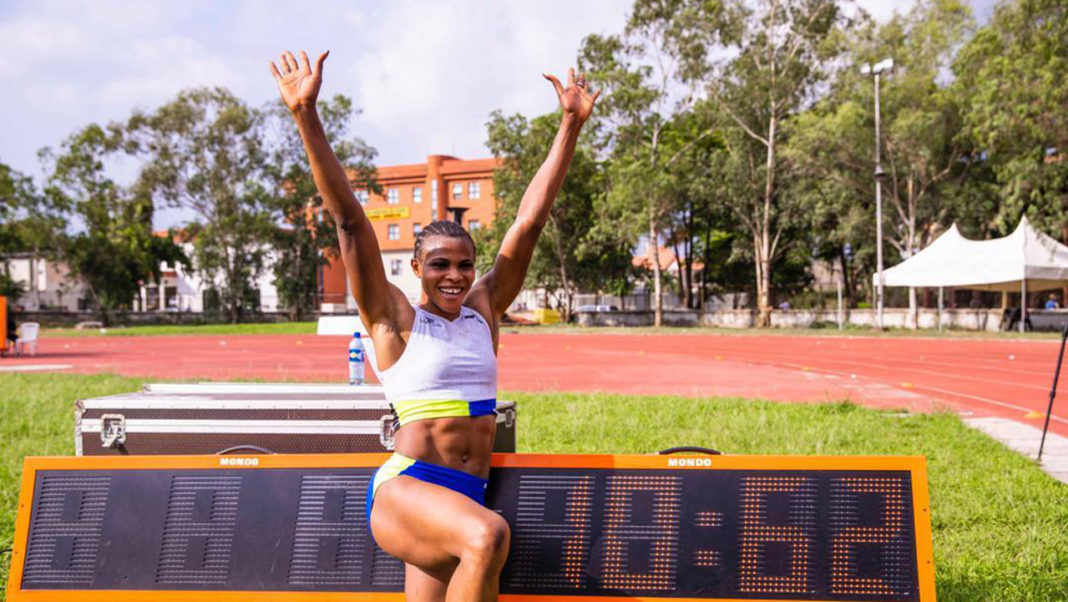 Blessing Okagbare after she ran a wind assisted 10.62 seconds during the AFN National Trials held at Yaba College of Technology. Lagos

Team Nigeria’s quest for Tokyo Olympics tickets in both men’s 4x100m and women’s 4x400m relays could not materialise in Lagos yesterday. But the women’s 4x100m made up of Blessing Okagbare, Grace Nwokocha, Blessing Ogundare and Rosemary Chukwuma gave the spectators something to celebrate, as they ran 42.97 seconds to improve on their previous time. The women team has, however, provisionally qualified for the 4x100m event.

The men’s 4x100m team, which slipped one step further down to 18th in the ranking of teams for the games following Turkey and Ukraine’s impressive performance at an athletics meeting on June 12 in Erzurum, Turkey, failed to make the expected mark of 38.0 seconds yesterday. The quartet of Enoch Adegoke, Jerry Jakpa, Itsekiri Itseoritshe and Godson Brume managed to run 39.40 seconds.

The women’s 4x400m did not fair better, as Patience Okon-George, Glory Patrick, Favour Ofili and Knowledge Omovo ran 3; 45. 33 seconds, while their male counterparts ran 3; 05.56 seconds to wave goodbye to the Tokyo Olympics.

Some of the athletes blamed their failure on the poor condition of the tracks following a heavy down pour in Lagos yesterday.

However, the teams could still qualify for the Olympics at the Lagos Open Athletics Championships fixed for June 24.

To that effect, the foreign countries, Cote d’Ivoire, Senegal and Zambia have been prevailed on to stay for the championships. To make that possible, the Lagos State government has promised to foot their bills for as long as they stay in Nigeria.

MEANWHILE, Nigeria Olympics Committee (NOC) President, Habu Gumel, said the presence of two top officials of the Confederation of African Athletics (CAA) at the Olympics trials organised by the Athletics Federation of Nigeria (AFN) ended the leadership crisis in the governing body.

The leadership crisis rocking the AFN was further heightened last week when a factional body emerged in Kebbi a few minutes after Tony Okowa was voted as president at an AFN elective Congress attended by chairmen and secretaries of various states’ athletics association in Abuja.

The emergence of the faction in Kebbi notwithstanding, Okowa and his board members, with support from the sports ministry, staged the National Trials in Lagos, where Nigerian athletes for the Tokyo Olympics were selected.

Speaking with The Guardian at Yabatech, Gumel said the presence of the two CAA officials was a clear indication that the Tony Okowa-led AFN board is the only one recognised by both the African and world bodies.

“The NOC made it clear since last week that there is only one AFN board in Nigeria and that is the one that was duly elected at the Congress in Abuja. Anybody who made himself a factional leader is wasting his time. These two gentlemen seating with us here are members of the CAA. Their presence here has ended the leadership crisis.”

Earlier, one of the visiting CAA officials, Abdusaheed, told The Guardian that he came to Nigeria on a personal visit to congratulate Tony Okowa on his election as AFN president.

“I am not here on behalf of CAA, but on a personal visit to congratulate Mr. Tony Okowa on his election as AFN president,” he stated.