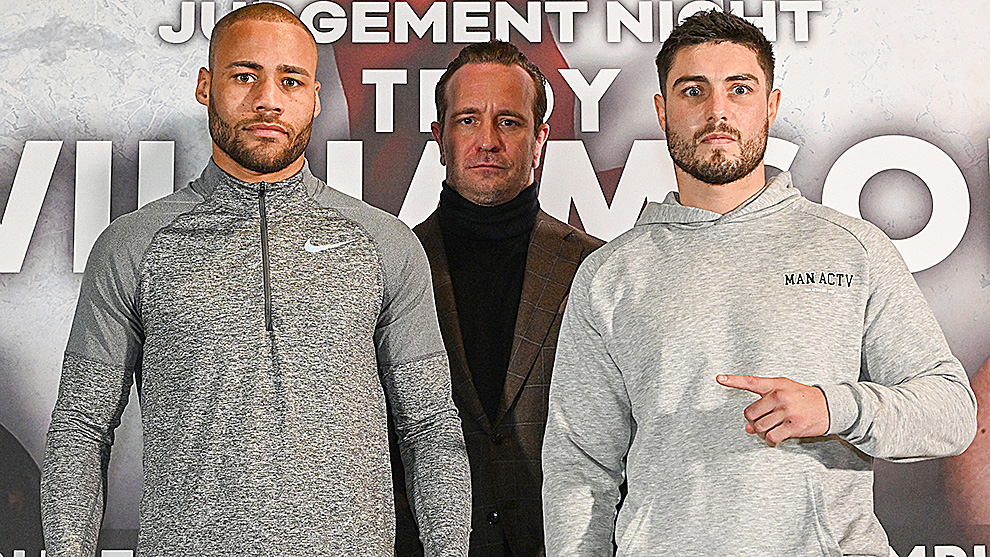 IT seems inevitable that the word “strength” will be said a lot ahead of the December 2 fight between British super-welterweight champion Troy Williamson and North East rival Josh Kelly.

A word never easy to define, there is, where this fight is concerned, bound to be a focus on both the physical strength of the two fighters involved and also, of equal importance, their mental strength. For Kelly, 12-1-1 (7), you get the sense the mental side of the game is every bit as important as the physical, whereas, for Williamson, 19-0-1 (14), much of his confidence comes from a belief Kelly, a former welterweight, will be unable to match him physically when the pair meet in Newcastle in December.

Chances are, the victor, as always, will be the one who masters both the mental and physical side of the game. Until then, however, both will be looking to strengthen those aspects – the body and mind – in the five weeks leading up to the fight.

“I’m just relaxed about it,” Kelly, the challenger, told Boxing News. “I feel ready and I’m confident. It’s not dissimilar (to his two previous fights this year). I feel like I’m in a good flow state and I don’t really need to come out of that. Even though I’ve only had 13 pro fights, I’m experienced enough to deal with all this.

“I feel like I’ve had a lot more experience in these situations than him. I’m too experienced and too clever to let anyone get under my skin.”

Familiarity breeds many things, including contempt. It also delivers insight and an awareness of buttons to press and flaws to exploit, something Williamson knows better than most.

“We’ve spent a lot of time with each other, travelling to numerous tournaments on the train,” he told BN. “I’ve been up to Sheffield and sparred him. We’ve done plenty of rounds sparring.

“Outside of boxing, I like Josh. He’s a good kid. But it’s a business, isn’t it? This is the hurt game. You’ve got to put friendship aside. Afterwards, we can shake hands and be friends again. There’s nothing personal. It’s just business. This is my job.”

Talking of business, Williamson does not need to be reminded how important it is for a fighter to market and promote, either to fans online or fans who congregate in football stadiums up and down the country each and every weekend. It is for this reason he understands Kelly’s decision to align himself with Sunderland Football Club, his hometown team, even if struggling to believe Kelly has any real interest in football whatsoever.

Williamson, 31, continued: “I wore a Newcastle top to his last fight (in July), but everybody who knows me knows what I was doing. I’ve never come out and said I support Newcastle. I just wore the top to get under his skin and ruffle a few feathers. It obviously worked. Everybody knows I’m from Darlington and train in Middlesbrough.”

Of their aforementioned sparring sessions, Kelly admits he remembers very little. He does, though, remember getting the upper hand – “I got the better of them” – which provides some of his self-belief ahead of the pair reuniting in a far more competitive sense before the end of the year. This belief is aided, moreover, by a recent move to super-welterweight, a division in which he feels as comfortable as he has ever felt.

“I feel like this is my natural weight,” he said. “It’s nice to just be able to focus on an opponent and an upcoming fight rather than having to focus on those things as well as making weight. Last fight I looked the bigger of the two anyway. This is definitely my natural weight, I just had to take the steps to get here. I’m a lot more comfortable here.”

“He’s obviously a strong, game kid, but I believe I’ll be physically stronger than him when he gets down to the weight, because he struggles at the weight,” Kelly said. “I think he’ll be shocked by it, and I think a lot of people underestimate my strength. But I spar with super-middleweights and light-heavyweights and am able to push them back. It takes more of a technique to do that. It’s not just about being physically strong or big. It’s about being able to manoeuvre yourself into positions and force your strength on people.”

Stuck somewhere between amused and insulted, Williamson, upon hearing Kelly’s claim, could only laugh.

“I think that’s completely ridiculous,” he said in response. “I don’t struggle to make weight. I eat and sleep boxing and never go out partying or anything like that. I’ll have had 10 weeks to make the weight and haven’t blown up in weight. If you look at my last fight (in September), I was 12 stone 3 and wasn’t fat. I only weighed 12 stone because I had just a week’s notice. I’ll do the weight this time better than I’ve ever done it.

“I think he’s had two fights at super-welter. He’s not fought anybody at 11 stone really. You put him in with the opponents I’ve fought at this weight and I don’t think he’d get the job done.”

In addition to strength, “toughness” is another word repeated plenty when it comes to these two, particularly by Williamson. He has relied on his own toughness to get him through fights against the likes of Ted Cheeseman and Mason Cartwright and, not only that, he suspects it is something lacking in Kelly, someone who, he says, is otherwise “very talented”.

“I have in my favour size, strength, punch power, fitness, and sheer determination. Also, hunger, if I’m honest. It’s shown in my previous fights, where I’ve been down on the canvas and got up and got the job done. But when he’s had tough moments in fights, he’s half bottled it and the corner has thrown the towel in. I feel that will be a big factor when we fight.”

Perhaps Williamson’s biggest asset going into this fight on December 3 is his firm grip on reality. Which is to say, while he is as naturally confident as any champion set to make a title defence, the man from Darlington also has enough about him to both confront and accept the reality of his situation, both the good and the bad. That, in many ways, is true mental strength.

“I’m not deluded, I probably will be down (on the scorecards) in the first few rounds,” he admitted. “He’s very fast, he’s very slick. But it’s a marathon, a 12-round fight, and at some point I will catch up with him. At that point, will he cope or will he crumble? I think he will crumble in the later rounds when it starts getting tough.”

Kelly, of course, a 28-year-old who has battled his fair share of demons and, he believes, conquered them, couldn’t disagree more with this prediction. To his mind, it’s not even a question. He will, when the time arrives, if the time arrives, have every answer needed for Williamson.

“I’m faster, more technical, and the better boxer,” he said. “I think the one way for him is to try to grind a win out, just coming forward, taking one to give one. He has to have that kind of mentality going in. I’ve never gone into a fight in my life like that and it’s a risky way to think, especially when you know the man you’re fighting is better than you.

“If I’m training for an opponent who is just going to come forward nonstop, how can I not be prepared for a high-pressured fight? He can’t box me because if he does he gets beaten. So he has to try and fight me. I’ve been in plenty of those fights now. I know the score and I know what’s coming. I’ll be prepared for that.

“I believe in the end he’ll walk on to a shot he doesn’t see coming and end up being hurt and put down. A lot of people think I’m a box-and-mover, which I am, and I can do that round after round, but I can also dig a little bit. If he wants to come forward recklessly, he’ll end up getting hurt. I believe that could be the deciding factor. But if he comes forward for 12 rounds, he’ll get his head boxed off as well.”