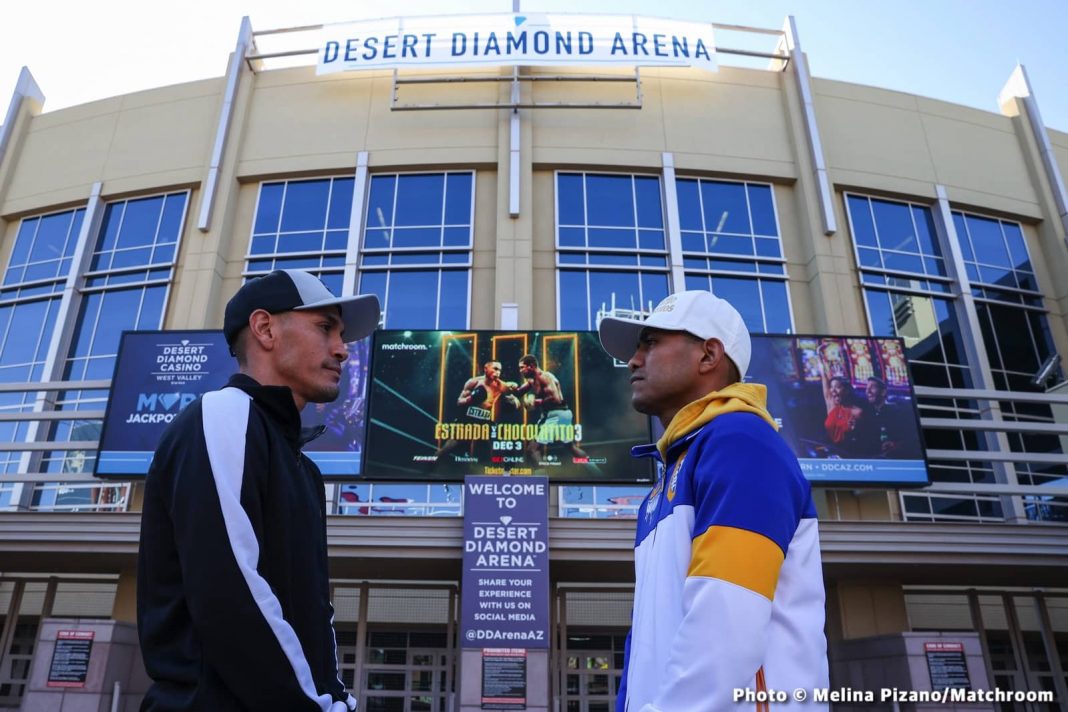 By Brian Webber: Roman ‘Chocolatito’ Gonzalez is the favorite to defeat WBC and Ring Magazine super flyweight champion Juan Francisco Estrada in their trilogy fight this Saturday night at the Desert Diamond Arena in Glendale, Arizona. The event will be shown live on DAZN.

The oddsmakers aren’t giving it a lot of guesswork with their siding with the former four-division world champion Chocolatito Gonzalez (51-3, 41 KOs) to defeat Estrada (43-3, 28 KOs).

All you need to do is watch their rematch last year in March, as well as the way both performed in their last bouts this year to know that Chocolatito is the guy that should win this match.

Estrada was out-gunned last year against Gonzalez and was shocking how poorly all three of the judges scored the fight, which took place in Dallas, Texas. In their first fight in 2012, Chocolatito won a decisive 12-round unanimous decision. It was competitive, but it was a clear win by Roman over Estrada.

In Estrada’s last fight against Argi Cortes in September, he got lucky again, winning another questionable decision in a fight he appeared to lose.

Matchroom Boxing promoter Eddie Hearn believes the winner of Saturday’s Estrada-Gonzalez 3 fight will be viewed as having the superior legacy.

If Estrada wins, he won’t be viewed as having the greater legacy because he lost the first and was also beaten in the second fight with Gonzalez in the eyes of many boxing fans.

“Neither fighter is going to take a step backwards and the punch count is going to be absolutely insane,” said Eddie Hearn to Matchroom Boxing about Saturday’s third fight between Roman ‘Chocolatito’ Gonzalez and Juan Francisco Estrada.

“I don’t believe this fight doesn’t go 12 rounds. I think you’re going to see a war of attrition against two modern-day greats. I think you don’t appreciate these great trilogies as the years’ pass.

“This trilogy has taken many years to develop, and there have been lots of fights in between. Two future Hall of Famers, two pound-for-pound greats, and two fight-of-the-year contenders already.

“This trilogy will go down as one of the greatest in boxing history, but this is the one that matters. It’s one apiece. After this fight, you’re not going to think about who won the first and who won the second. You’re just going to ask, ‘Who won the trilogy?’

“Both guys will be remembered as true greats of the sport, but the winner will be the one cemented as the greater legacy in the sport, in my opinion.

“Wherever you are in the world, there’s only one place to be, live on DAZN. The greatest trilogy of our generation. Estrada against Chocolatito. One apiece, all to play for. The war to settle it all in Phoenix. We can’t wait,” said Hearn.