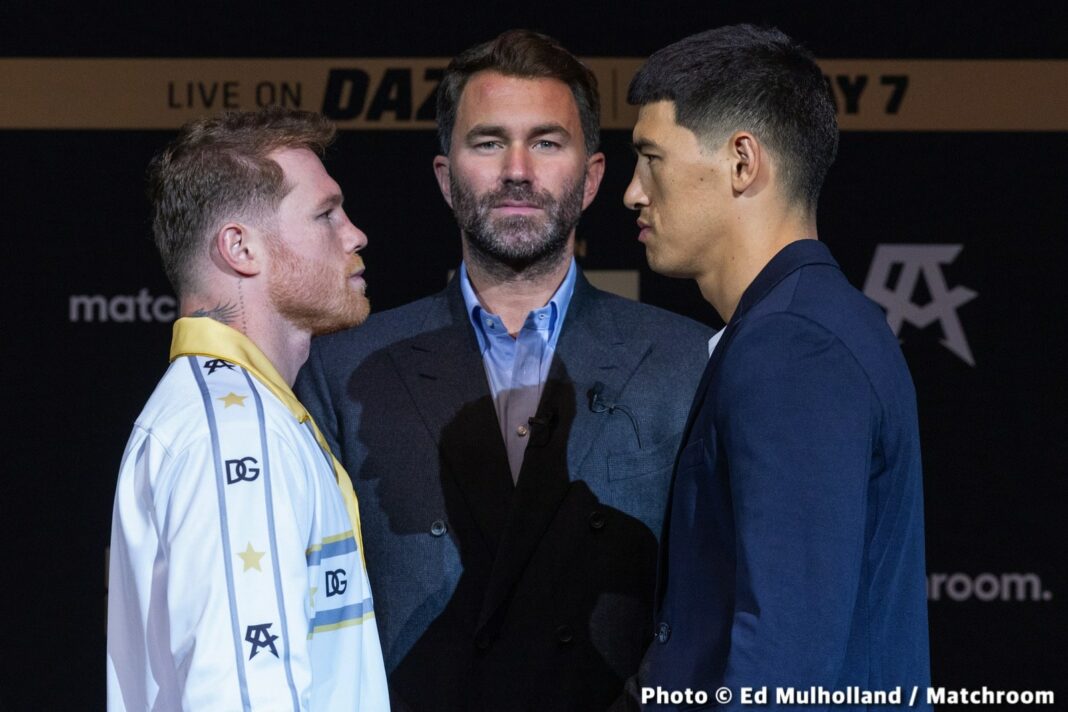 By Dan Ambrose: Dmitry Bivol sees through the excuses that Canelo Alvarez is trying to hide behind after his loss to him last May. To whittle down the excuses from Canelo, Bivol (21-0, 11 KOs) says he’s still willing to fight him at 168 to help him with the weight.

Canelo wouldn’t have to worry about fighting a much bigger foe if Bivol drains to 168.

What surprised Bivol, besides the handful of excuses, is that Canelo still hasn’t executed the rematch against him. He thought he would, but Canelo chose to face Gennadiy Golovkin last September.

After that fight, Canelo decided to have wrist surgery, and as a result, he now wants a tune-up in May. He’s talking about taking the rematch with Bivol in September next year, but whether that happens is unknown.

“I don’t know. I’m resting now,” said Dmitry Bivol to Fighthype when asked if Canelo Alvarez is next for him. “We will see. I don’t know.

“First, he said, it’s not his weight class. Then he said, ‘It’s not good camp.’ Now he says it was his arm,” said Bivol about Canelo’s excuses for his loss last May against him. What I can say?”

“He has his number. I love Canelo, but Bivol already has his number in terms of the way he fights,” said Nonito Donaire, warning Canelo.

“The way he fights and the style is pretty much the same. The way he’s coming in confidently, you can’t deny what he’s done,” said Donaire about Bivol.

“If I train hard and everything is good in my camp, I believe in my skills that I can beat everyone at light heavyweight,” said Bivol.

“I hope. I should,” said Bivol when told that he’ll defeat IBF, WBC & WBO light heavyweight champion Artur Beterbiev. “I believe in myself.

If things go badly for Canelo in his tune-up fight next May, anything is possible. You got to imagine that the rematch with Bivol would get further delayed, possibly into 2024.

Of course, it would be seen as a joke at that point because two years will have elapsed since the Canelo-Bivol fight.

With that said, Canelo made Golovkin wait four years to fight him after his narrow 12 round majority decision win in their rematch in 2018.

Bivol (21-0, 11 KOs) is amused at the way Canelo keeps shifting from one excuse after another to try and explain away what happened to him in their fight at the T-Mobile Arena in Las Vegas six months ago.