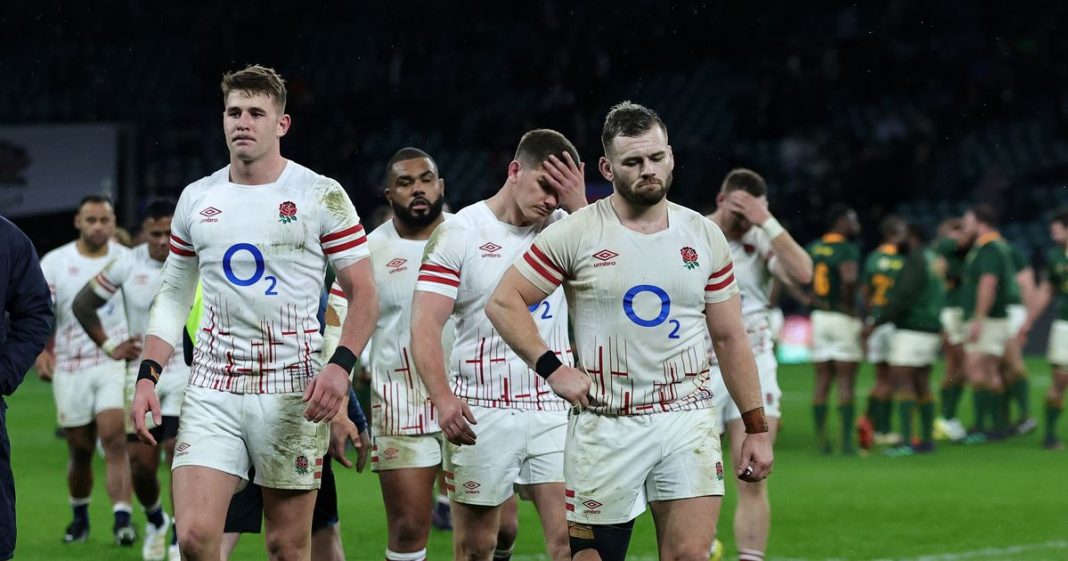 Eddie Jones said sorry to England fans after his side were beaten up and booed off Twickenham.

A week after dodging a bullet against New Zealand, they were obliterated by South Africa, slumping to a seventh loss in 2022.

It completed the nation’s worst set of results in a calendar year since 2008 and left Jones admitting: “We didn’t play well and I apologise for that. I take full responsibility.”

England were out-muscled by an under-strength Boks side in an experience every bit as chastening as their 2019 World Cup final drubbing in Japan.

Less than 300 days out from the World Cup Jones finds himself in a deep hole with the Rugby Football Union, criticised in the week by a DCMS committee over their governance of the domestic game, facing ever-louder calls to stop the slide.

This was a horror show from the moment Freddie Steward dropped a high ball in the third minute. Steward, World Rugby’s fullback of the year; Steward, who just doesn’t drop balls.

Owen Farrell, who had not missed a kick at goal all autumn, fluffed the first of two from bang in front of the posts, then Mako Vunipola was crunched at the first scrum.

Another week of bold talk from England, another Saturday spent failing to walk the talk.

This was a Springbok team without its England and French-based players who were ineligible due to the match being staged outside of the international window,

Yet Frans Malherbe had their number at the scrum, supplemented by Eben Etzebeth’s incredible power behind him, making a mockery of Jones’ pre-match claim that England had a “competitive edge” in that area.

So total was their domination that the head coach hauled off the entire front row at half-time, along with wing Tommy Freeman, who twice had got in Steward’s way under the high ball.

Before all that, however, came the moment of the match, a sumptuous try by a Springboks side labelled “boring” ahead of kick-off but anything but cometh the hour.

England kicked loosely, with zero chase, Damian Willemse countered, fed inside to Willie le Roux, who fizzed it outside to Kurt-Lee Arendse.

Shown the outside by Marcus Smith, the wing took it with stunning footwork to equal a Springbok record of scoring in six consecutive Tests.

Manu Tuilagi had a 50th cap to forget
(
Getty Images)

Add a couple of Willemse drop goals either side of half-time and even the cavalry could do nothing to turn the green and gold tide, aided it must be said by English stupidity.

First Jonny Hill lost his head to gift the Boks field position, then Tom Curry was sin-binned, then Etzebeth powered over. Against a Boks team on its last legs at the end of a punishing year this was awful.

A week ago England recovered from 25-6 to force a draw with the All Blacks. At 27-6 nobody could see a repeat.

South Africa did throw them a bone, prop Thomas du Toit coming off the bench and almost immediately getting himself sent off for a high hit on Luke Cowan-Dickie.

England responded with a try from Henry Slade, well worked by Ben Youngs. But any thought that it would spark a miracle dissolved with another handling error.

The final whistle sounded, the boos rained down from the stands and England went back to square one.