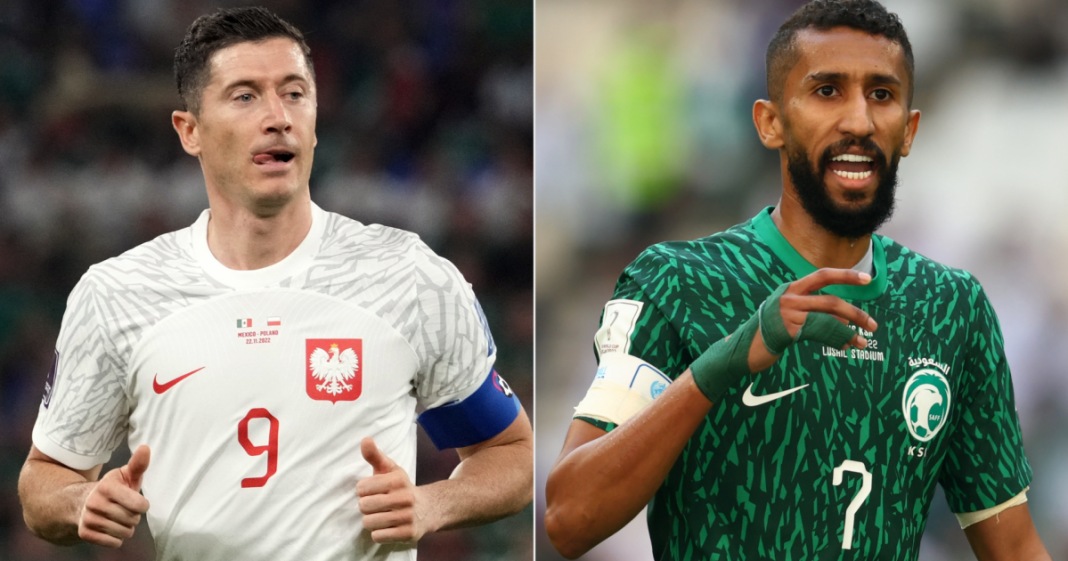 The surprise package of Group C, Saudi Arabia, will take on Poland in their second match at the 2022 World Cup.

After stunning Argentina 2-1 in their opener in dramatic fashion, Saudi Arabia will now turn their attentions to Robert Lewandowski & Co as they look to qualify from the group stage at the competition for just the second ever time.

To complete that feat, they’ll likely need to avoid defeat here with a very tough test against Mexico sitting on the horizon in their third and final group stage outing.

That’ll be easier said than done, though, with their victory against Argentina acting as only their second across their previous 13 World Cup matches, losing by an aggregate scoreline of 34-8 over that stint. Poland will also likely prove to be defensively solid opposition.

Despite their shock win against Argentina in their 2022 World Cup opener, it’s clear to see that the bookmakers are expecting Saudi Arabia to suffer a bit of a reality check here against Poland.

The Asian side may not be massive rank outsiders but with Poland sitting at -135 coming into the clash, it’s clear that they’re seen to have too much quality for Saudi Arabia to handle.

That quality mainly comes in the form of star striker Robert Lewandowski who may have missed a penalty vs. Mexico in their opener, but has netted 18 times across 19 competitive appearances for Spanish giants Barcelona this season.

Derby County midfielder Krystian Bielik injured himself after coming on as a halftime substitute in Poland’s draw with Mexico. Bielik is expected to be ready to feature against Saudi Arabia, while defender Bartek Bereszynski, who had been considered a major doubt but started the opener, appears to have put his injury concerns behind him.

Left back Yasser Al-Shahrani was stretchered off in the final minutes of Saudi Arabia’s incredible win against Argentina after colliding with goalkeeper Mohammed Alowais. Scans have revealed a fractured jaw and facial bones, as well as internal bleeding. Alowais has since undergone emergency surgery on the injury and the defender is likely to be ruled out for the rest of the tournament.

MORE: Full injury tracker for all 32 teams at the 2022 FIFA World Cup

That’s because there’s expectation for the Middle Eastern side to follow on from that victory with another big performance here but Poland’s dogged backline could easily keep them off the scoresheet in truth.

The European nation kept Mexico off the scoresheet on match day one – a side who boast more attacking threat than Saudi Arabia on paper – whilst they’ve kept three clean sheets in succession overall.

Given their goalless stalemate with Mexico on match day one in Group C, expect Poland to show much more desire to get into the attacking third here against Saudi Arabia.

Simply put, they’ll know that anything less than victory here could see them really struggle to get out of the group, especially with their third and final match coming against Argentina.

Whilst Lewandowski may have had a trying time so far throughout his career in the World Cup, failing to score across four previous outings and missing a penalty in his country’s 2022 opener, he has to find the back of the net at some point.

This could be it, especially against Saudi Arabia who have conceded at least one goal in their past four competitive national outings.