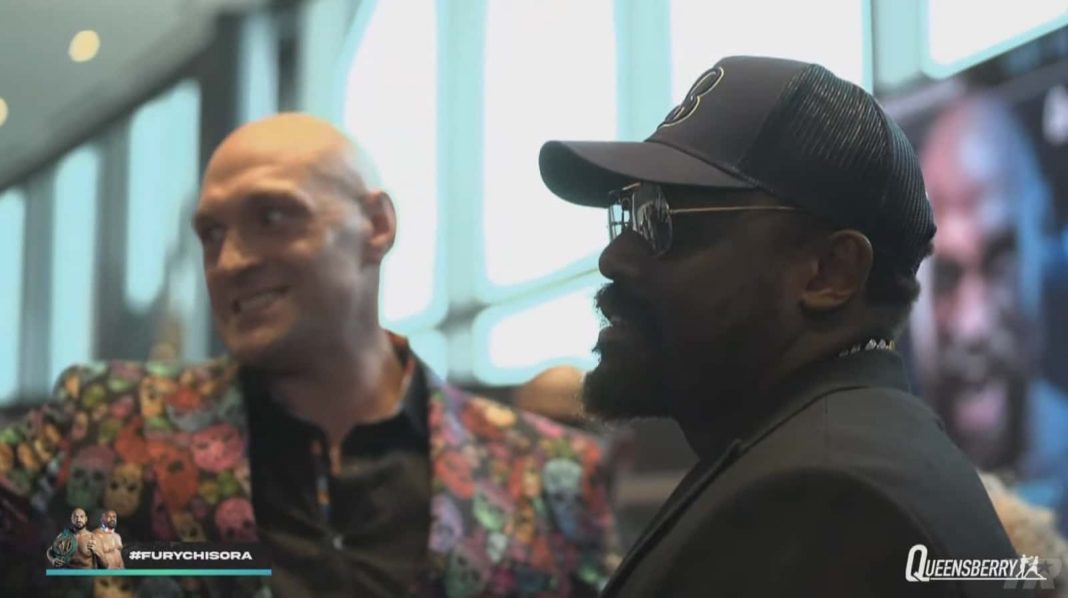 By Charles Brun: Eddie Hearn says he’d like to see the huge underdog Derek Chisora knock out Tyson Fury next month when he challenges him for his WBC heavyweight title on December 3rd at the Tottenham Hotspur Stadium in London, England.

The 6’9′ Fury (32-0-1, 23 KOs) has already beaten Chisora twice in one-sided contests, and it’s difficult to envision the shorter, older Delboy doing any better in the trilogy fight on December 3rd unless he lands the perfect punch.

We don’t know if the punishment that Deontay Wilder inflicted upon Fury in their three fights has diminished his punch resistance. In Fury’s last fight against Dillian Whyte, he was barely hit before knocking out the hapless ‘Body Snatcher’ in the sixth round.

In Chisora’s last fight against Kubrat Pulev last July, he appeared very slow with his punches and was exhausted from the third round. If the 41-year-old Pulev weren’t so old and slow, he probably would have won the fight.

As it were, many boxing fans had Pulev winning anyway. He outworked and out-landed Chisora, but the judges were more impressed with the small handful of shots that Delboy landed in each round.

“I think Del Boy is a gem. He’s got one of the biggest hearts in boxing,” said Eddie Hearn to Fighthype when asked about his prediction on the trilogy match between journeyman Derek Chisora and WBC heavyweight champion Tyson Fury.

“Of course, on paper, Fury has beaten him twice. People aren’t expecting Chisora to have a chance in the fight, but don’t rule Derek out. He’ll always give everything. He’s a massive underdog in the fight, has a huge heart, and he’s a warrior,” said Hearn.

Unlike the average fan, who believes that a person should earn an opportunity through hard work, Hearn is okay with the 38-year-old journeyman Chisora (33-12, 23 KOs) being given a title shot by Fury after having lost three out of his last four fights.

“We’re a million percent behind him. I’d love to see him chin Tyson Fury. People don’t know that Derek has a huge heart, and he’s a real good bloke.

“I’m delighted for him to get not just a payday because that’s always important, but the opportunity,” said Hearn about Chisora.