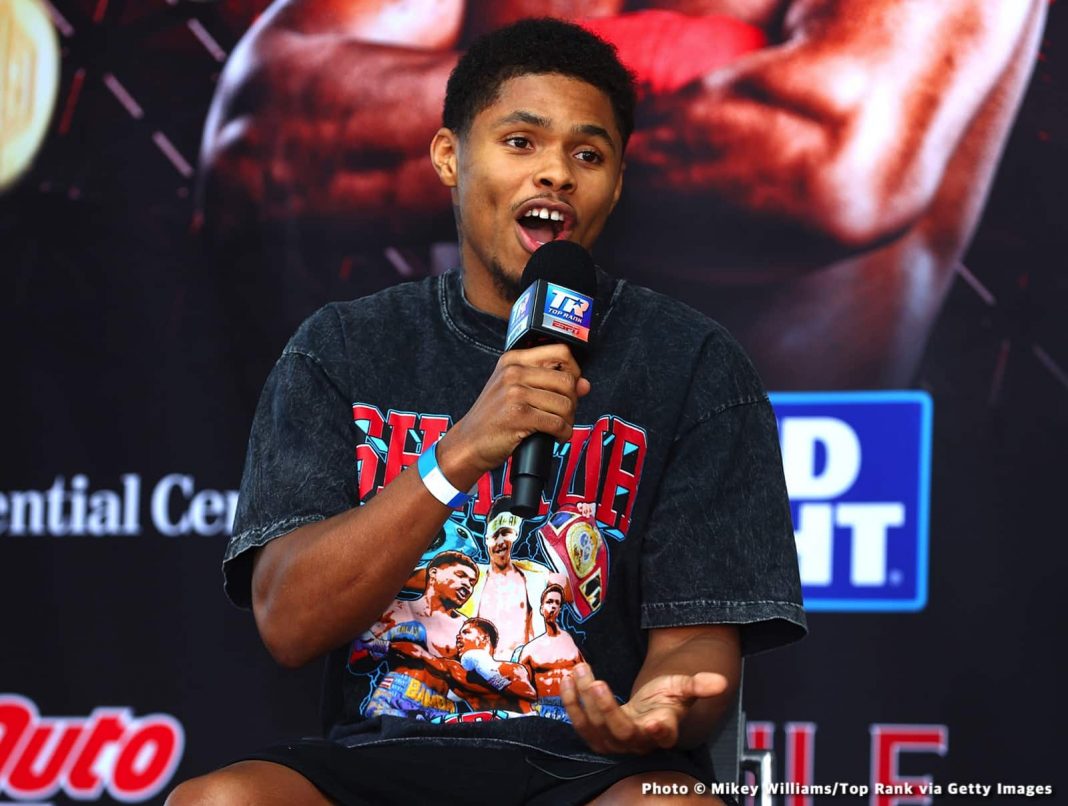 Shakur possesses far better hand speed, power, and defensive ability than Haney. It’s hard not to see Stevenson becoming the #1 fighter at lightweight by next year, even if he doesn’t face Gervonta ‘Tank’ Davis.

Stevenson (19-0, 9 KOs) is moving up to lightweight after world titles in two weight classes, and he’s already positioned himself to fight the winner of next year’s clash between Haney (29-0, 15 KOs) and Vasyl Lomachenko.

Haney owes his success at lightweight due to his huge size for the division, as he’s essentially a junior middleweight fighting three divisions below his body frame.

That explains why Haney looked skeletal when weighing in for his last two fights at 135 against George Kambosos Jr. It’s believed by some that Haney’s walking around weight is 170+ lbs, and he doesn’t look fat.

The 23-year-old Haney is just a huge fighter that is arguably gaming the system by competing against fighters much smaller than himself to find success that he wouldn’t enjoy if he fought at 147 or 154.

“I think Shakur is going to do a lot better than Haney has done, and Haney has done what he’s done now,” said Teofimo Lopez to Fighthype about the potential of Shakur Stevenson at 135.

“I believe Shakur is going to do a lot better than that because I think one thing, Shakur has a little more pop than Haney. I think that’s what’s going to hold him at 135.

“I can’t at this point,” said Teofimo about how he can no longer fight at lightweight to take on fighters like Shakur and Haney. “We’ve seen them sparring,” Teo said when asked who wins between Haney and Stevenson. “Sparring is a lot different from an actual fight.

“Those two have faced each other, and they have a lot of respect towards one another. When you’re talking about Shakur, he don’t like to lose.

“It’s the promoters. They’re holding hostage too,” said Teofimo about why the big fights like Terence Crawford vs. Errol Spence Jr and Gervonta ‘Tank’ Davis vs. Ryan Garcia aren’t made.

“It’s all about moving forward, really. Honestly, we need to make these fights happen. I think that someone from the higher chair of the networks, we’re all going to make money to the point where even the networks will make triple more than they think they can make if they just stepped in with the promoters and pushed the fight a little bit more.

“We’re going to fight each other. Some of them don’t want to fight because of the pay, but they have to understand that you get the pay when you beat the best. I mean, Floyd had to beat Oscar De La Hoya to become the ‘Money Man.’ Then he became ‘Money May.’ It’s just a whole bunch of casuals,” said Teofimo.