Edgar Berlanga Has John Ryder On His Radar 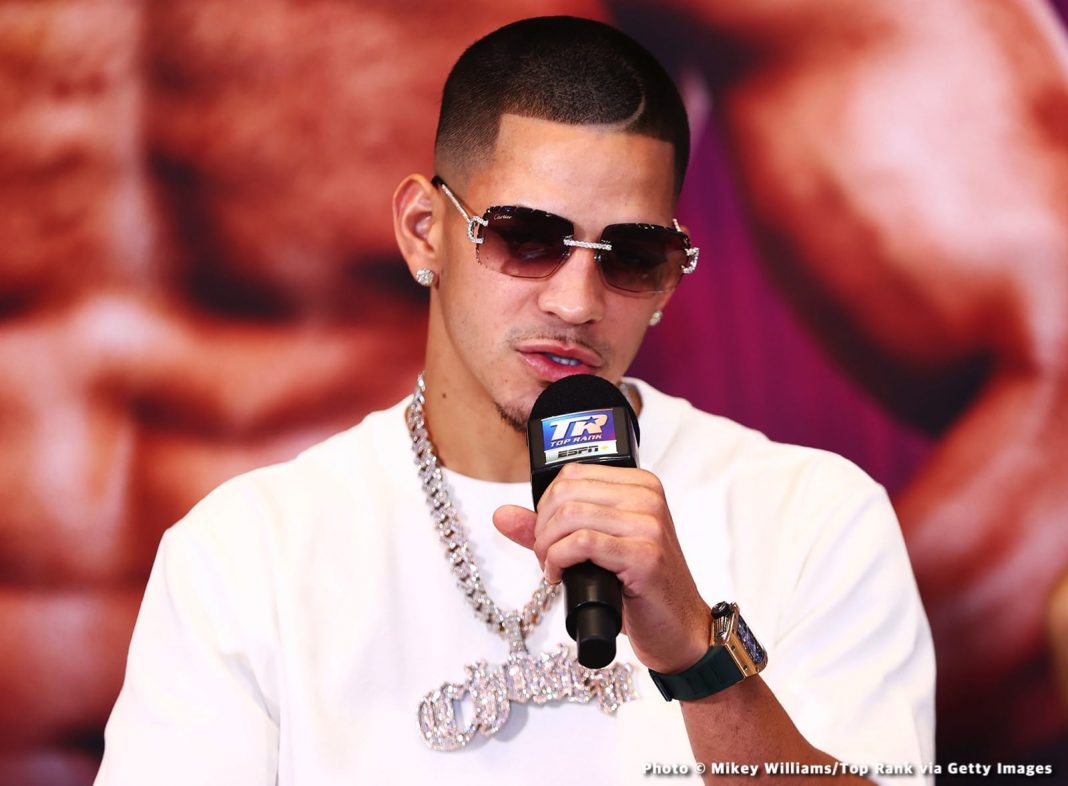 By Vince Dwriter: Super middleweight contender Edgar “The Chosen One” Berlanga made his professional boxing debut in April 2016 when he knocked out his opponent Jorge Pedroza in the first round.

From 2016 to 2020, Berlanga would make brief cameos inside of the squared circle as he knocked out his next fifteen opponents in which none of them were able to make it out of the opening round.

With a resume that included 16 fights and 16 first-round knockouts, Berlanga was a prospect on the rise, and due to his ability to deliver the quick KO, his fanbase grew instantly. Puerto Rican fans, hardcore fans of the sport of boxing, casual fans, and celebrities who enjoy the sweet science gravitated to boxing’s new knockout machine.

Berlanga’s KO streak brought a refreshing type of energy, excitement, and anticipation to the sport of boxing. During the course of the streak, fans would simultaneously watch the action in the ring, and the time clock, as they cheered for Berlanga to keep the streak alive.

Unfortunately, all good things must come to an end, and in April 2021, Berlanga’s opponent Demond Nicholson was able to survive the first round and go the distance. Nicholson started a trend as Berlanga’s next three opponents were able to go all 10-rounds against the Puerto Rican Monster. In June 2022, at the Hulu Theater in Madison Square Garden, Edgar Berlanga was ready to start a new knockout streak, but instead of beginning a new streak, he created an incredibly embarrassing career moment.

In the seventh round of the fight, Berlanga made an attempt to bite his opponent Alexis Angulo around the neck and shoulder area. Berlanga was able to earn a unanimous decision victory, and during the post-fight interview, he admitted to trying to bite his opponent. “He was throwing elbows. I was about to do a Mike Tyson on him,” Berlanga stated. His interview turned into a confession as the New York State Athletic Commission issued a six-month suspension and a $10,000 fine.

With his suspension coming near an end, Edgar Berlanga (20-0, 16 KOs), is ready to get back inside the ring and pick up where he left off. Outside of the biting incident, Berlanga was progressing as a boxer, he was able to maintain an undefeated record, and he earned a spot in the super middleweight rankings. While conducting an interview with Fighthype, the 25-year-old revealed that he wants to return to the squared circle in January, and his team has a particular opponent in mind.

“I just want to make the best fights happen. Right now, I’m in a position where I’m ranked number 10 in the world at 168, and right now, I have the opportunity to fight anybody I want. I feel like my name is big enough to call out whoever I want, and we can make the fight happen. We got a guy named John Ryder; we got him on the radar right now for my next fight, so we’re trying to push that.”

John Ryder (31-5, 17 KOs) is a former WBA interim super middleweight champion. He won the vacant interim title in May 2019 when he beat Bilal Akkawy by TKO in the third round. Six months later, Ryder fought Callum Smith for the WBA and Ring Magazine super middleweight titles. Ryder gave a valiant effort, but unfortunately for Ryder, he lost the championship bout by way of a unanimous decision.

Edgar Berlanga and his team view John Ryder as a quality opponent, and they are hoping a deal can be made. If Berlanga is successful against Ryder, a showdown between him and rising Mexican star Jaime Munguia (40-0, 32 KOs) could be a potential matchup made for the latter part of 2023.