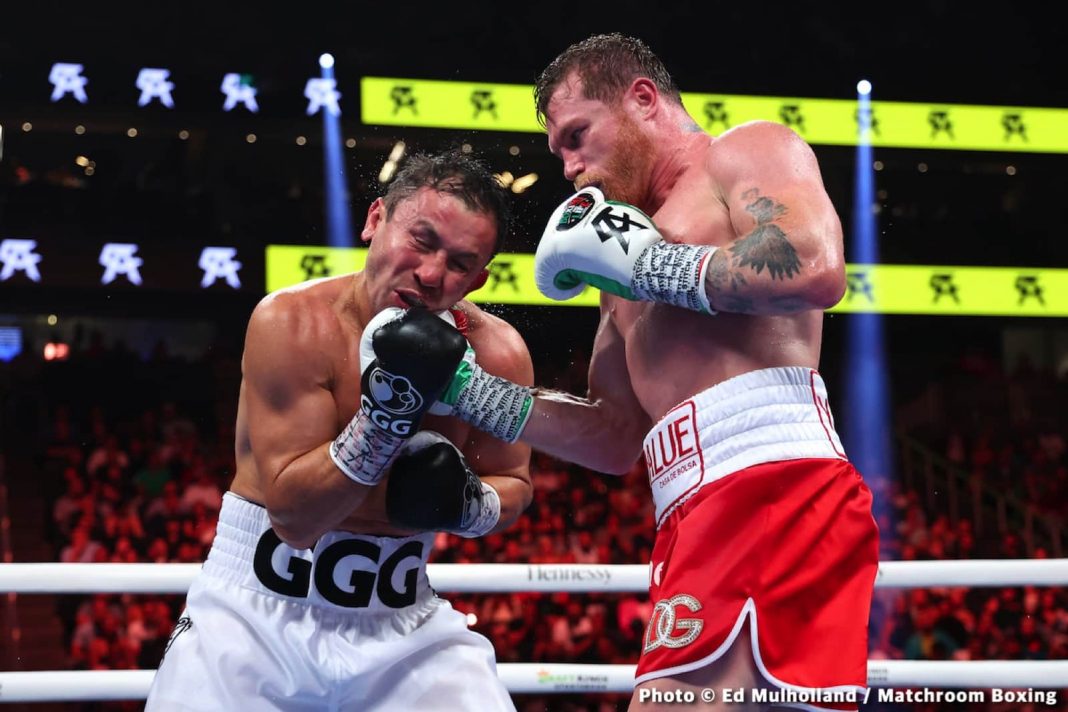 By Robert Segal: Last Saturday night’s trilogy fight between Canelo Alvarez and Gennadiy Golovkin III brought in between 550,000 and 575,000 pay-per-view buys on DAZN.

Dan Rafael is reporting that “multiple sources” are saying that Canelo vs. Golovkin III brought in much lower than expected. The event would have needed far more than those numbers to break even, which means the organizers have taken a bath with this one.

It’s not a shock that the PPV numbers are far less than hoped for the Canelo-Golovkin III fight because it was a contest that was no longer appealing to the boxing public.

The opposition that the public wants to see Canelo fight are from this list:

Unfortunately, Canelo is not interested in fighting any of those guys right now, preferring to take on the ancient-looking Golovkin.

So instead of giving the fights that the fans wanted to see, Canelo went for an easy mark against Golovkin, and the result was lower than hoped for pay-per-view buys.

The 40-year-old Golovkin has fought moderate-level opposition exclusively in the last four years since his loss to Canelo in 2018, and he’s looked shot in two of his fights against Ryota Murata & Sergiy Derevyanchenko.

In the eyes of a lot of fans, this fight was just a cash-out for the 40-year-old Golovkin.

Golovkin made things worse for the promotion by choosing to use an interpreter throughout the build-up to the fight, and that took away from his natural charisma because he came across as dull and unsmiling during interviews.

That was arguably a mistake. Promoter Eddie Hearn should have pulled Golovkin aside at some point and told him to stop using his interpreter for interviews because they were already up against it putting on a fight that is past its sell-by date.

“Alvarez-Golovkin III would have to be considered a major disappointment, considering that, according to sources, DAZN needed far more buys than 600,000 to break even given the reported $75 million [purses] combined guaranteed to Alvarez and Golovkin.

“Both of those fights fell far short of the approximately 800,000 buys Alvarez generated for his 11th-round knockout of Caleb Plant to unify all four 168-pound titles,” said Rafael,