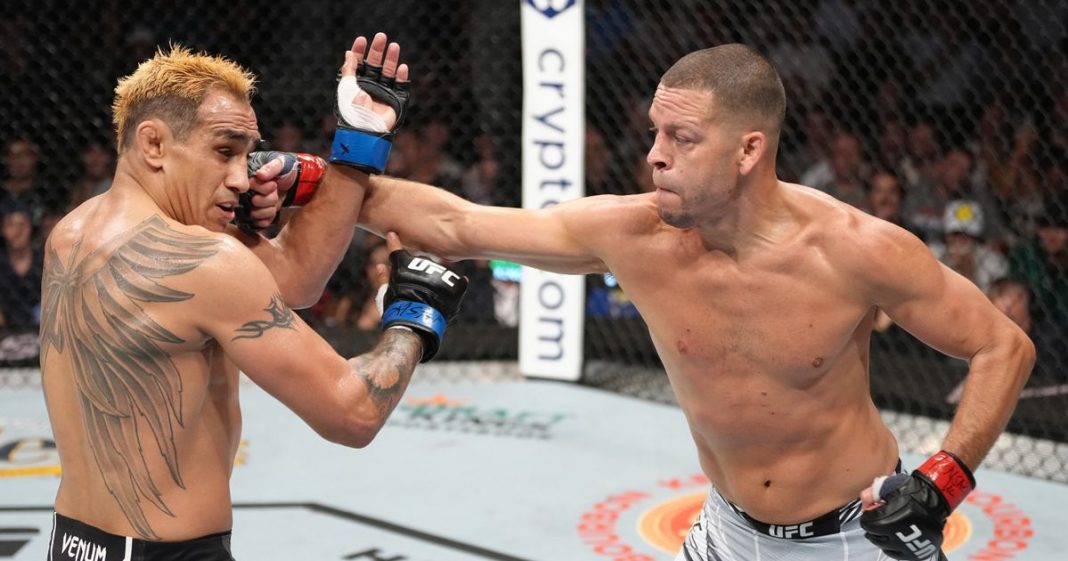 Nate Diaz made a stunning exit from the UFC by choking out Tony Ferguson in the fourth round of their hastily-arranged fight.

Diaz was originally scheduled to face Khamzat Chimaev in the main event of UFC 279, but the fight was scrapped after the Chechen missed weight by 7.5lb. Diaz refused to accept a catchweight bout with Chimaev and was instead booked to fight Ferguson, whilst Kevin Holland was pulled from his fight with Daniel Rodriguez to face Chimaev.

And Ferguson faced adversity moments into the fight when a cut opened up on his shin, seemingly after Diaz checked one of his kicks. Ferguson was coming up short with his spinning attacks whilst Diaz was finding success with his boxing in the opening round. Ferguson was landing more in the second round but Diaz opened up a cut on his eyelid that caused him some trouble.

Ferguson’s kicks were beginning to add up in the third round as Diaz took bizarre breaks by resting on the cage. Ferguson’s left shin and foot were covered in blood as Diaz continued to attack the cut which had opened up in the first round. In the fourth session, Ferguson shot for a takedown but Diaz jumped straight onto a guillotine choke and forced Ferguson to tap.

Diaz hinted at a move to boxing but didn’t rule out a return to the UFC, stating: “Right now, I feel like I’ve had the longest career in the UFC and the most successful,” he said. “I’ve had a love-hate relationship with the UFC, but I love the UFC. I’m going to go out there and take over another profession and show everybody I’m the best at that. Then I’m gonna be back and get a motherf*****g UFC title.”

Elsewhere on the UFC 279 card, Chimaev submitted Holland inside two minutes whilst not absorbing a single strike in the fight. Chimaev put on a relentless pace from the opening bell, taking Holland down with ease and eventually securing a d’arce choke to force the American to tap.

Rodriguez outpointed Li Jingling to pick up his fourth consecutive win. Jingliang gave up a 10lb weight advantage in the fight as he was originally booked to face Ferguson, but was shifted to fight Rodriguez.

What were your thoughts on the fight between Tony Ferguson and Nate Diaz? Let us know in the comments section below

Irene Aldana put herself in pole position for a shot at women’s bantamweight champion Amanda Nunes by stopping Macy Chiasson with a bizarre liver up-kick from the ground. The fight was even heading into the third round until Aldana, who know has consecutive knockout wins, planted her food into Chiasson’s liver whilst on her back to secure the stoppage win.

Chris Barnett picked up his second UFC win by knocking out Jake Collier, despite missing the heavyweight limit by 1.5lb on Friday afternoon. Norma Dumont spoiled the UFC debut of talented amateur boxer Danyelle Wolf as she won a unanimous decision, with Elise Reed also beating Melissa Martinez on her promotional debut.