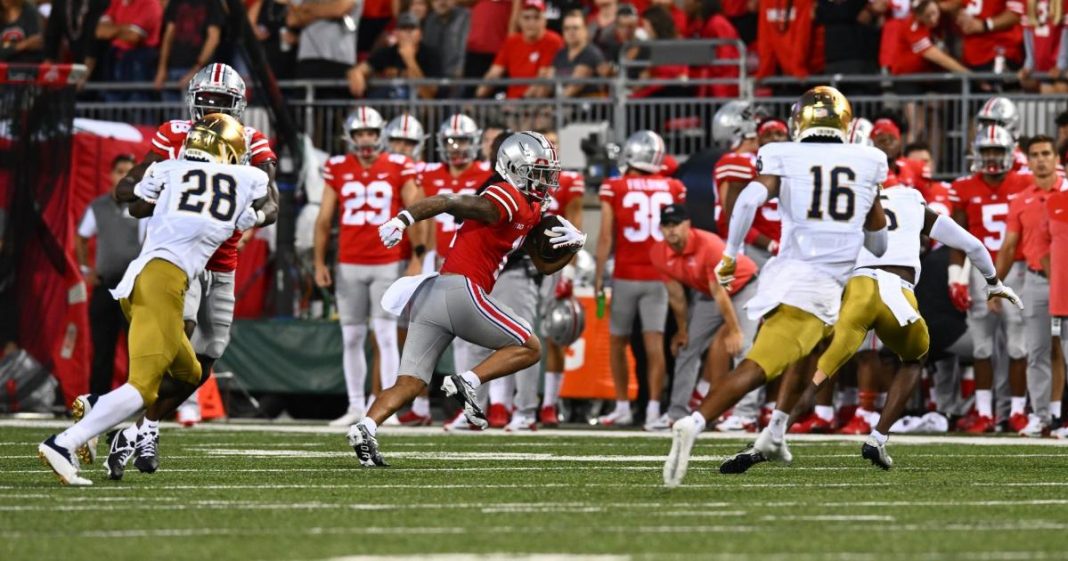 No. 2 Ohio State pulled off an impressive Week 1 victory against No. 5 Notre Dame, but it might have sustained a major loss during the game.

Top wide receiver Jaxon Smith-Njigba left the matchup against the Fighting Irish in the first quarter with an apparent leg injury, and though he briefly returned in the second quarter, he was out for the entire second half. A report from 247Sports indicates Smith-Njigba could be out for one or two games due to a hamstring injury.

While the Buckeyes went on to beat the Fighting Irish 21-10, Ohio State certainly did not look like the No. 1 total yardage and scoring offense from a season ago without Smith-Njigba in the game. The Buckeyes had just 295 total yards in the game, and leaned on their defense and rushing game to propel them to the Week 1 victory.

“[Smith-Njigba is] the best receiver in the country and we’ve built a connection, not just on the field but off that helps us on the field,” quarterback C.J. Stroud said, per 247Sports. “So when he was out the game, of course, it affected our team, it affected our offense. But at the end of the day, when you look at it, we got the job done.”

Here’s what to know about his injury:

Smith-Njigba could miss a few games due to what 247Sports reports is a low-grade hamstring injury. A source told 247Sports he should be ready “in a couple of weeks.”

Missing one or two games for Ohio State should not be a major problem. The Buckeyes host Arkansas State on Sept. 10 and Toledo on Sept. 17. According to Caesars Sportsbook, Ohio State is a 43.5-point favorite against the Red Wolves. There aren’t odds yet for the clash with the Rockets, but expect it to be similarly lopsided in the Buckeyes’ favor.

If Smith-Njigba were to miss any more than those two games, however, it gets to be more problematic for Ohio State. On Sept. 24, the Buckeyes host No. 18 Wisconsin to kick off the conference portion of their schedule.

With Smith-Njigba out, the Buckeyes turned to two different receivers primarily in the slot.

First was standout sophomore Emeka Egbuka, who came into the year with expectations to start out wide. He logged 40.5 percent of his snaps in the slot and 59.5 percent out wide. Egbuka led the team with nine receptions for 90 yards and a touchdown.

One of the bigger surprises during the game was former walk-on Xavier Johnson, who wound up logging eight of his nine snaps in the slot. On one such snap, he ran a seam route up the middle, catching the Notre Dame defense by surprise on a double safety blitz and hauling in a 24-yard touchdown reception to put the Buckeyes up 14-10.

RIGHT DOWN THE MIDDLE ‼️

OHIO STATE TAKES THE LEAD IN THE 3RD 👀 pic.twitter.com/WNtRAtGqrA

Heading into the year, the Ohio State wide receiver room was expected to be deep, but inexperienced. Smith-Njigba was the only wide receiver coming back with more than 160 career receiving yards.

Starting for the first time to open the season alongside Smith-Njigba was Egbuka and Marvin Harrison Jr. Julian Fleming missed Saturday’s contest, but is expected to be in the mix for starting snaps.

Without Smith-Njigba on the field, the next two games could be a time for Stroud to build up more of a connection with some of the younger receivers. But when the bright lights come back out against Wisconsin, he undoubtedly will want to have his favorite target back out on the field. Smith-Njigba set programs records with 95 receptions and 1,606 receiving yards last year, on a team that featured 2022 NFL Draft first-round selections Chris Olave and Garrett Wilson.