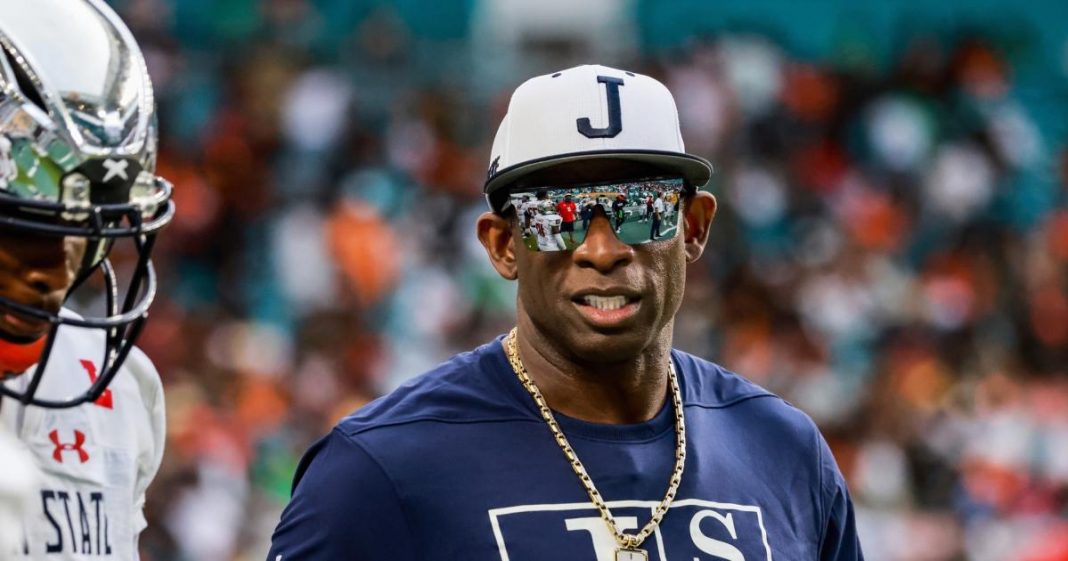 It’s been six seasons since Florida State finished above .500.

That type of performance tends to knock you off the top of the college football totem pole. And when looking at the state of the football program now, it’s hard to draw many parallels to FSU’s past success.

Back in those days, Tallahassee was the place to be on a Saturday night. The Seminoles were the hottest ticket in town for the better part of 40 years. Whether it was Bobby Bowden or Jimbo Fisher on the sideline, it felt like all Florida State could do is win games.

Now, the program needs a facelift. Who better to do it than a blast from the past?

Deion Sanders has shifted the tides of college football in recent years, bringing elite talent to Jackson State while also showing a solid understanding of the value of name, image and likeness rules.

Couple that with his history with the Seminoles, and it seems he may be a perfect fit. But will the storied program try to convince him to join the project in Tallahassee? The Sporting News examines the whether Florida State will chase after its former football legend in the near future.

Will Florida State lure Deion Sanders away from Jackson State?

FSU’s last few seasons have not been good. The Seminoles are a middling team in an increasingly tougher ACC.

And even bright moments — such as their conquest of No. 5 North Carolina in 2020 — have been matched by duds (e.g., FSU falling to FCS team Jacksonville State last year).

Sanders’ stock, meanwhile, appears to be through the roof.

The Pro Football Hall of Famer has turned Jackson State into an HBCU powerhouse in the blink of an eye. In 2019, the Tigers finished went 4-9.

Much of that success comes from Sanders. He’s instilled a culture within Jackson State’s locker room walls, embracing this “us against them mentality.” He’s also embraced the national spotlight, inviting celebrities like Ric Flair, Snoop Dogg and the late Young Dolph to meet his players.

All of that attention brings appeal. Appeal brings recruits. And if there’s one thing Sanders can do, he can recruit.

Last year, he secured the signature of No. 1 recruit in the country Travis Hunter. Hunter’s recruitment wasn’t a fluke, either; per 247Sports, the Tigers nabbed another 12 four-star recruits in 2022. By comparison, of USC’s eight freshmen, just five of them earned at least four-star status.

Hunter’s recruitment is the perfect case study to examine this phenomenon. The shutdown cornerback is a Florida native, one who made his intentions to go to Florida State very clear as late as December.

Yet, when push came to shove, Hunter wanted to be like Prime Time. That made the decision crystal clear for him.

“Travis is chasing greatness.” Sanders said earlier in the year, per USA Today. “Travis and his family don’t get down like that. They never came to us in search of the bag. They’re not built like that. This kid wants to be great.”

The reality is, Sanders has an eye for young talent. The more young talent he brings into Jackson State, the better the Tigers will perform. And it’s hard to imagine Florida State won’t want a piece of that action.

As of now, Mike Norvell holds the Seminoles’ reins in his grasp. However, with just an 8-13 record entering into the 2022 season, the pressure is on.

If Norvell can’t get it going in Tallahassee, the program will look for someone who will. And it’s hard to imagine a better candidate than Prime.

So, will FSU lure Deion Sanders from Jackson State? It’s anybody’s guess at the moment. Sanders did reaffirm his commitment to the Tigers during the offseason.

“I’m happy where I am. It’s a calling where I am,” Sanders said on an episode of Jackson State-based YouTube channel, Thee Pregame Show. “God didn’t give me a timetable. He said, ‘You’ve got to go be there for how long.’ He told me to do what (He) asked me to do and do it at a high level.”

Say I took a job at a Power 5. That does not change my lifestyle. That doesn’t do nothing for me, I’m good. God has sustained me. I’m good.

As long as Sanders continues on his path to success with the HBCU side, though, it’s hard to imagine Florida State not knocking on his door.