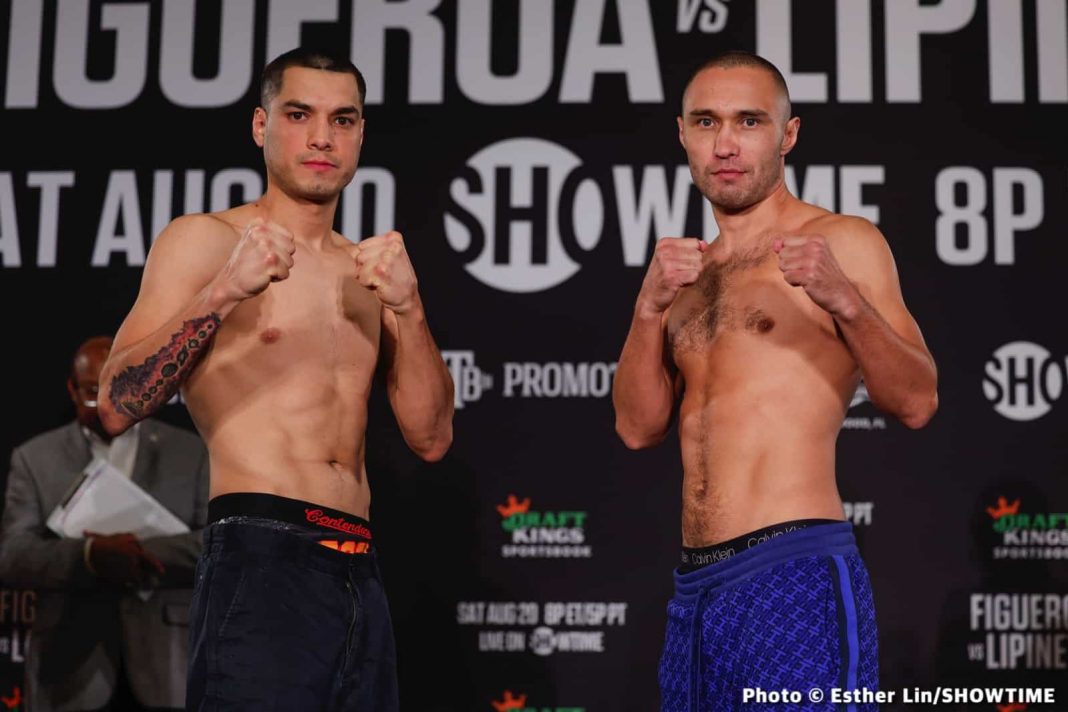 In the first round Figueroa came out southpaw taking it to Lipinet and going back to orthodox. In the final minute Lipinet rocked Figueroa with a left hook to the chin. In the second round Lipinet scored a knockdown with a counter right on the chin for an 8-count by referee Christopher Young. In the third rounds final minute Lipinet used a good body attack taking the round.

In the sixth round Lipinet used an effect jab keeping Figueroa from amounting much of an offense like he had the first five rounds. In the eighth round Lipinet doubled up on his rights to the chin of Figueroa having him in trouble throughout. The corner stopped the fight.

In the first round three rounds Puello had an edge countering well against the aggressive Akhmedov in a close fight. In the fourth round Akhmedov used a good body attack driving Puello to the ropes for most of the round.

In the fifth round Akhmedov used a jab followed by combinations to the body of Puello taking the round. In the sixth round Akhmedov had Puello hurt at the end of the round with a vicious body attack. In the eighth rounds final minute Puello landed a three punch combination. Seconds later a left uppercut from Puello on the chin rocked Akhmedov.

In the twelfth and final round Akhmedov continued going to the body as Puello countered well mostly to the head. The action continued to the bell. Referee was Samuel Burgos.

In the first round three rounds Garcia pressed the fight for the most part taking all rounds. In the fourth and fifth rounds Gutierrez couldn’t seem to pull the trigger enough. In the seventh through the ninth rounds Garcia continued outworking Gutierrez.

In the tenth round Gutierrez landed a right on the chin driving Garcia into the ropes having his best round of the fight. In the eleventh round Gutierrez again did well though way behind on the scores he needed a knockout. In the twelfth and final round Garcia seemed to have won the title in out working Gutierrez. Referee was Frank Gentile.

In the second round a left hook from Lee who dominated the fight opened a cut on the right eyebrow of Madera. In the third round a lead overhand right from Madera on the chin dropped Lee for an 8-count from Referee Christopher Young near the end of the round. It was the first time Lee had been down in his career.

In the fourth and fifth rounds Lee was able to re-coup from the third round knockdown to get the best of Madera whose cut was bothering him. From the sixth through the ninth Lee took every round in a good match up. In the tenth and final round Lee finished strong against a game Madera.

Scores were 98-91 by all judges and this writer.