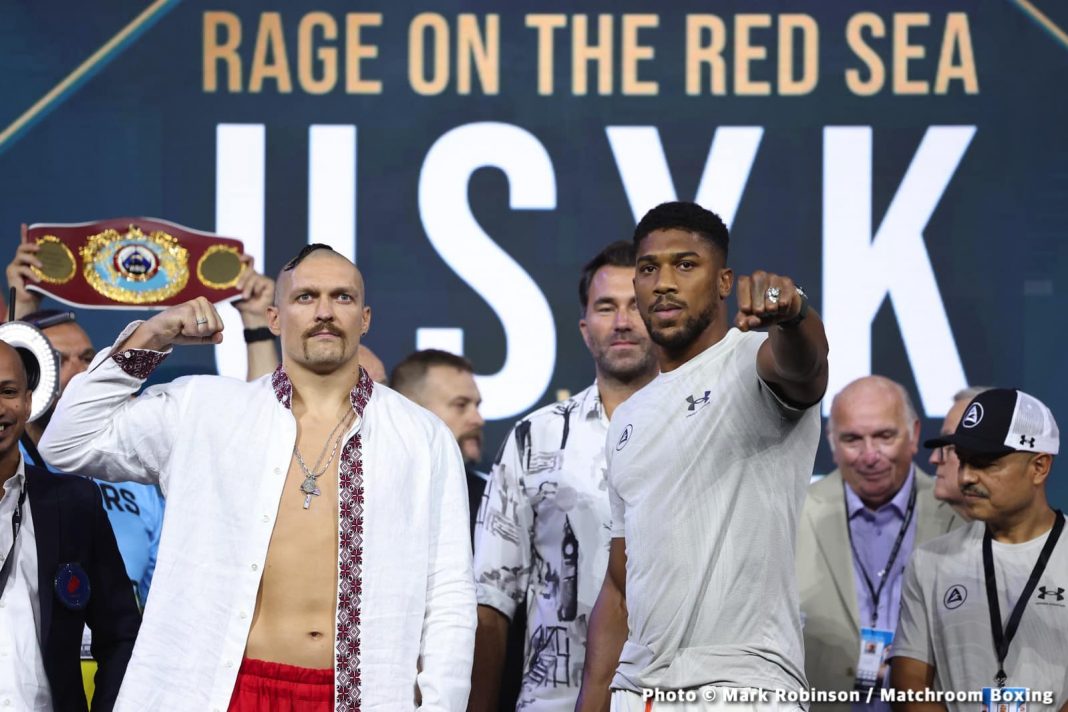 By Barry Holbrook: Anthony Joshua says his long face-off with Oleksandr Usyk today at the weigh-in “means nothing” because face-offs don’t win fights.

The only thing that matters is what takes place inside the ring when he battles unified heavyweight champion Usyk (19-0, 13 KOs) in a rematch at the Jeddah Superdome in Saudi Arabia.

Joshua, 32, looked amped up during the weigh-in, and he was clearly feeling the pressure that was being put on him. AJ can’t afford to lose this fight if he wants to continue to be viewed as one of the elite heavyweights in the division.

“Not much. It was just a face-off. For me personally, face-offs don’t mean nothing,” said Anthony Joshua after weighing in. “It’s just about the bell ringing and us throwing leather, really. Face-offs don’t win fights.

“I’ll be honest; all this stuff doesn’t matter. It’s just about the fight,” said Joshua when asked about his thoughts on Usyk’s weight. All this stuff, weight, face-offs, none of it matters to me. I’m just looking forward to the fight.

“It was an intense head-to-head. They’re ready,” said Eddie Hearn to iFL TV. “I think both guys are pretty emotional. I think Usyk has been emotional during the week, and he’s got a lot going on around his world.

“AJ really wants the win. You saw that in the head-to-head. He’s just preparing himself for battle and for war. I did an interview with the BBC yesterday, and the presenter said to me, ‘If AJ loses, surely, he’s finished. I mean, how many comebacks can one man have?’