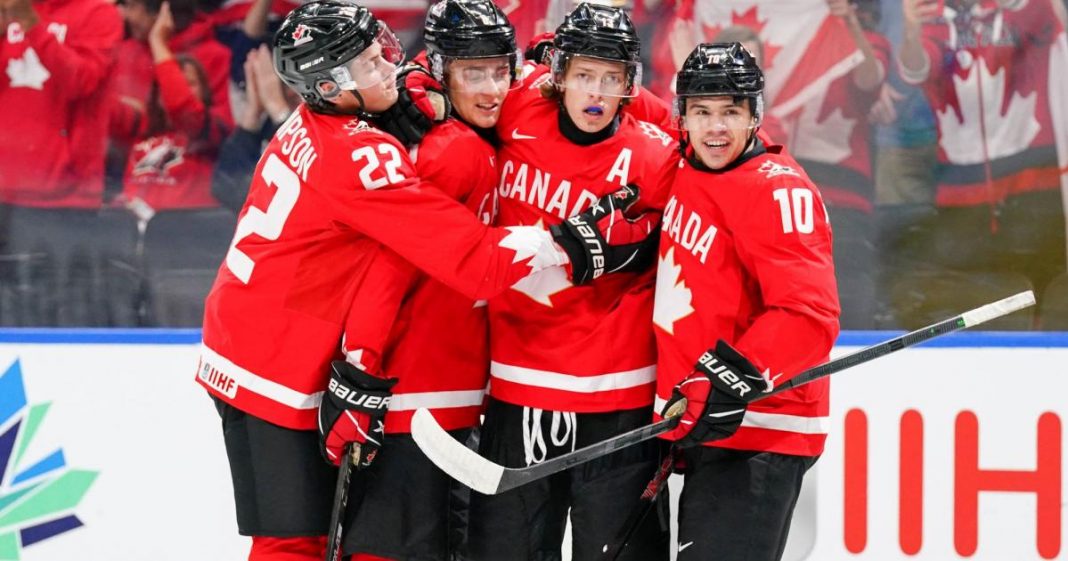 For the third consecutive World Junior Championship, the home of hockey will be playing for gold. Canada defeated Czechia 5-2 in the semifinals of the 2022 tournament Friday.

Canada scored twice each in the first and second periods and headed into the final 20 minutes up 4-0. Czechia did not go down easily; it scored two goals in the third to cut the deficit in half, but a late goal by Canada provided needed insurance.

It was another game where the line of Logan Stankoven, Kent Johnson and Tyson Foerster carried most of the offensive load. Johnson picked up a goal and two assists, Stankoven had a goal and a helper, and Foerster added an assist.

Canada will play a brief waiting game as Sweden and Finland play Friday night to determine Canada’s opponent in the gold-medal game Saturday. The Canadians are playing in the tournament final for the sixth time in the last eight years and are looking to add gold medal No. 19 to the trophy case.

The Sporting News has three main takeaways from Canada’s victory:

Another strong showing by the Stankoven-Johnson-Foerster line

This line was Canada’s best forward group in the quarterfinals, and the trio continued its exceptional play in the semis.

It was most evident in the first period. The three were buzzing around on every shift, creating chance after chance. Johnson opened the scoring by cleaning up a loose puck in front of the Czech net. Stankoven ended up with the game-winning goal on a breakaway in the second.

Kent Johnson starts off the scoring for Canada! #WorldJuniors pic.twitter.com/OjisfvqxZS

While the chances decreased as the game went on, the line’s effectiveness didn’t. Stankoven didn’t get credit for an assist, but he forced a turnover in the Czech zone that led to Joshua Roy’s insurance goal in the third. The Stars prospect also was stellar again in the faceoff circle, winning 21 of 23 to push his tournament win percentage to over 75 percent.

Johnson finished with a goal and two assists, Stankoven had one of each and Foerster picked up a helper. While coach Dave Cameron has been mixing up the Mason McTavish line, those three have been playing together consistently all tournament long, and they have taken over as the team’s top scoring line.

Canada entered its semifinal contest an impressive 6 for 13 on the power play. The team increased that success rate against Czechia by going 2 for 3. The Canadians head into the gold medal game clicking at 50 percent with the man advantage.

Stankoven potted his goal on the power play as Canada took advantage of a horrid line change and neutral zone coverage by Czechia. The gave the Canadians a 3-0 lead. Stankoven was left alone in the middle of the ice and Johnson found him for a breakaway, which he did not miss.

MORE: Why are the World Juniors being played in August?

Canada’s fourth goal also came while up a man. Johnson faked a slap shot at the point before sliding the puck over to McTavish at the right dot for the one-time goal.

While the power play didn’t score on its third chance, Canada spent almost the entire two minutes in Czechia’s zone, with McTavish firing off three one-timer attempts from that right dot spot.

The special teams performance sends a clear message to Canada’s opponent in the final — do not take penalties.

Canada must come out stronger at the beginning of periods

One thing to work on heading into Saturday’s final is how Canada starts periods. It came out slow Friday and gave up a few chances to Czechia before finding its footing.

The second period started even worse. Czechia dominated play for the first five minutes, outshooting the Canadians 8-0 in that span. If not for the strong play of goaltender Dylan Garand, Czechia could have cut into the 2-0 lead that Canada had built after the first period.

Things got a bit better in the third as Canada opted to play a safer, more reserved game to maintain the lead, but it still allowed chances. In the end, Canada did not get burned by the poor starts, but it is not a pattern it should want to fall into.

MORE: Who has won the most World Juniors?

Finland and Sweden are both better than Czechia. While Canada has shown it can recover from slow starts, it’s best not to risk it against either team.