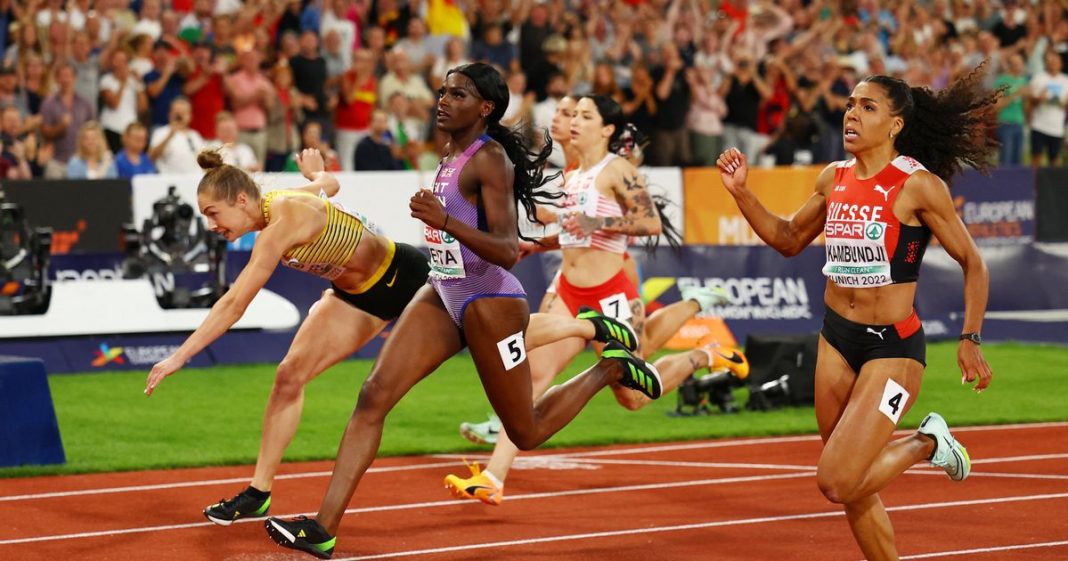 Dina Asher-Smith’s injury curse struck again as she gave up her European sprint crown without reaching the finish line.

A hamstring injury had forced Britain’s fastest woman to miss the Commonwealth Games where she had poster girl status.

And three weeks proved not enough to recover her fitness as she broke down early in a 100 metres final won by home favourite Gina Luckenkemper.

The Kent star said: “It’s very annoying. I had cramp in my calves. I can’t be running on two cramping calves. I need to look into how I’m hydrating.

“I feel good, I’m in good shape, which is why I’m frustrated. There’s no tear, no damage. But I got cramp in both my calves and I wasn’t about to go and run a whole race and probably tear them.”

She too complained of cramping, though was reluctant to offer up the excuse of a third championship in six weeks.

Given that both Britain’s top sprinters were afflicted by cramp – as have Zharnel Hughes and Reece Prescod in high profile episodes in the past year – the pair are not alone in being curious as to why this should be.

Their fate completed a disappointing night for Britain as Hughes lost his men’s 100m crown in front of a 50,000 crowd in Munich’s Olympic Stadium – then long jumper Jacob Fincham-Dukes was controversially demoted from second to fifth place.

For Neita, the British champion, it was another major final in which she fell short of her own expectation.

At the World Championships the 25-year old ran a heat time which would have got her into the final, but fell short in the semis and did not qualify.

A week or so later at the Commonwealth Games her semi-final time would have won the final, but what followed was good enough only for bronze.

Like Asher-Smith, Lamont Marcell Jacobs picked up an injury in Eugene. Unlike her, the Olympic champion made a triumphant return.

Daryll Neita: “I was cramping up a lot. I was saying a prayer on the start line that I got through in one piece”
(
Getty Images)

The shock winner of last year’s Tokyo final showed no signs of the thigh problem that caused his withdrawal at the worlds.

Azu’s joy contrasted with heartbreak for Fincham-Dukes who thought he had won a shock silver medal, only for it later to be ruled that the 25-year-old’s opening leap of 8.06m was a foul.

British team leader Paula Dunn said: “We are obviously very disappointed for Jacob as the mark was originally given a green light in the competition.

“If it had been ruled a foul, it would have changed the whole complexion of the competition.

“We appealed the decision, but the Jury of Appeal agreed with the decision of the field referee. We did everything we could.”