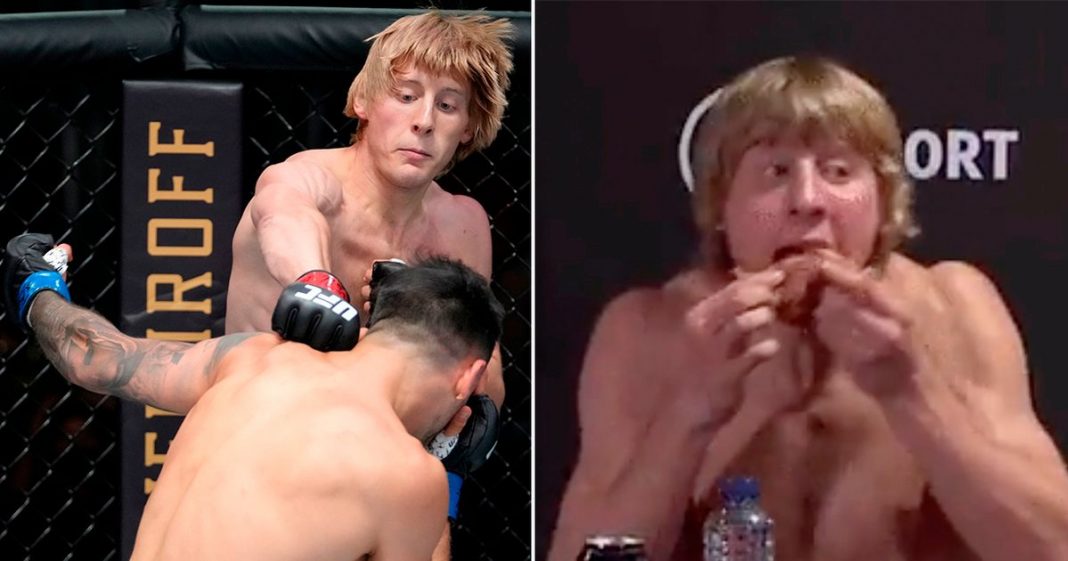 Paddy Pimblett is well on course to make weight for UFC London, after telling fans he’s just 169lb today, with three days until the weigh-in.

Pimblett will step back into the octagon on Saturday night at The O2 arena in London, where he will square off with Jordan Leavitt in his third UFC bout. He will have to weigh a maximum of 156lb the day before at weigh-ins, which is just a 13lb drop over the next three days.

It may appear to an average person that losing nearly a stone within three days is veering on impossible, but it is standard fare for fighters like Pimblett. He will cut down to 156lb and rehydrate, likely piling on similar weight over the next 24 hours before he steps into the octagon to fight.

Asked last night what he was weighing around six days from when he steps into the cage, Pimblett let fans know he was well on track. “169lb fella,” he replied. “Easy work.”

Pimblett is infamous for ballooning in weight after his fights, during which he sports a shredded six pack physique. He couldn’t wait until his post-fight press conference back in March to tuck into a pizza, and didn’t stop on his calorie binge until agreeing to face Leavitt a few months ago.

But he has never missed weight, and was even able to make 145lb earlier in his career, where he was a Cage Warriors featherweight champion. If he were 169lb the day before his fight with Leavitt, he would likely still be able to make the weight, having previously told of some gruesome cuts.

“The night before, I’d cut 19lb in a bath, in a sauna,” he told reporters of his cut to featherweight. “That night of, that morning, when I had to go out, the extra two hours to go and make weight, I couldn’t get in and out of the sauna.

Are you excited for Paddy Pimblett to make his UFC return on Saturday night? Let us know your thoughts in the comments section below!

“I got physically pulled in the sauna and pulled out the sauna. I’ll never forget [coach] Adam saying, ‘If he dies, it’s not on me,’ and when I fought, I had to cut like 7.7kg overnight, which is about 16-17lb.

“I got a DEXA scan that day, and I went and got a DEXA scan the other day. And they can cross-reference them; compare them over. He said, if a doctor would’ve looked at that DEXA scan, he wouldn’t have let me fight the next day. I was 0.2kg away from acute kidney failure and one kilo of water weight away from dying.”

Pimblett will take a notable step up in competition when he faces Leavitt, who is 10-1 as a professional, including three UFC wins and a Contender Series victory. He has previously beaten Rodrigo Vargas and Luigi Vendramini, who had a collective 2-4 record in the promotion.