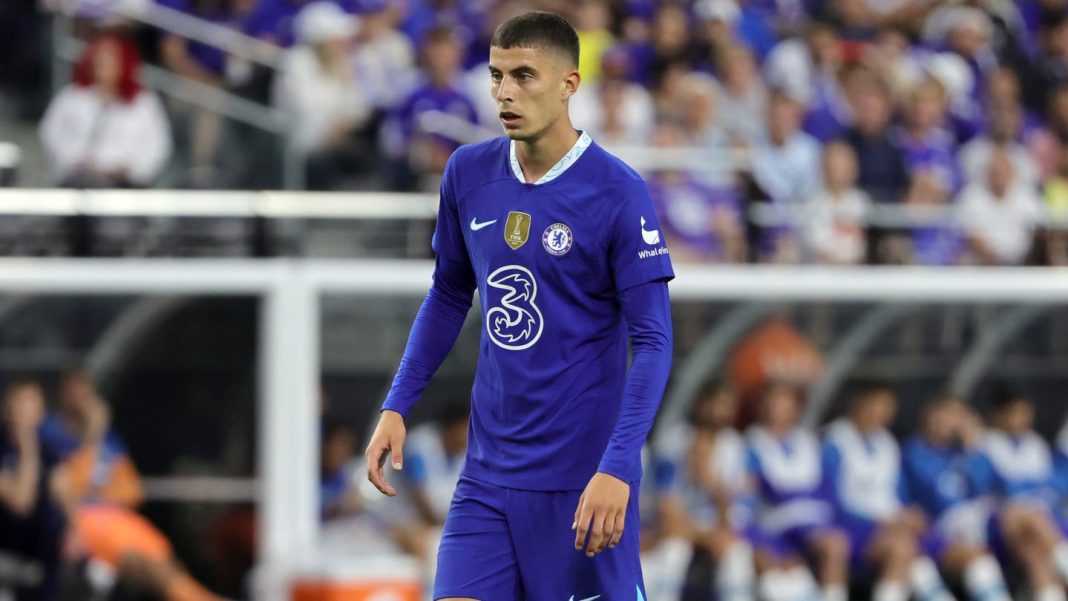 Kai Havertz has thanked manager Thomas Tuchel for keeping faith with him as Chelsea’s starting striker.

The 23-year-old arrived from Bayer Leverkusen in 2020 as more of an attacking midfielder but has spent a large part of his Chelsea career as a striker – a role he is likely to retain this coming season following the departure of Romelu Lukaku to Inter.

Tuchel has recently confirmed that signing a new striker to replace Lukaku is ‘not a priority’, meaning Havertz is set to spend at least another season as Chelsea’s number nine, and he told The Athletic that he is grateful to see his boss so committed to him.

“Of course,” Havertz said. “It is always good for a striker and for me as well [to know that].

“I’m still young. I need to get that confidence from the coach. I need his trust, sometimes in the bad times, too. He has always given me that trust in the last couple of years. In every match, I want to repay the trust.

“You always feel the responsibility when you play. Hopefully, it is going to be a better year than last year.”

Now 23, the jury is still out on Havertz’s best position. The Germany international has played as an attacking midfielder, a right winger and a striker, and he even played as a deeper midfielder under former Blues boss Frank Lampard.

“I’ve played a lot of positions over the years but last season, I played a lot as a number 9 and it’s a position I like very much,” Havertz explained. “If I look back four years ago, I could never have imagined playing there.

“It’s still good that I am flexible and can play different positions up front, but I am there to score goals and make assists, and as a number 9, you have to do that and link up with players.

“I always go into matches telling myself that I want to score or make an assist. As a striker, you have to do that. Of course, it’s not possible in every game. There are only a small amount of players that can really do that, and even they struggle sometimes, so I go into every match trying to score and help the team.”

As well as adjusting to life as a striker, Havertz admits to still learning the ways of English football, including the dark arts often directed his ways by defenders.

A meeting with Everton towards the end of last season, in which Havertz struggled up against the physical Yerry Mina, served as a perfect example of what the German still has to work on.

“Yes, of course. Everton was maybe a bad example because they were very tough to play against and last season they were fighting against relegation, so it was a crazy match,” Havertz conceded.

“You know when you play in England that a lot of games are going to be like this. The defenders are very hard and I am not the type of number nine who goes into every duel or always wants these duels. Sometimes, I want to sneak around them. But I’ve played for two years in England now and I am used to it.

“Consistency in football is a very big word. We play every three days and we have to always keep the level high. It’s normal that for one game, you drop the level. It’s not possible to score five goals in every game. Consistency is a big point and I try to work on that.”