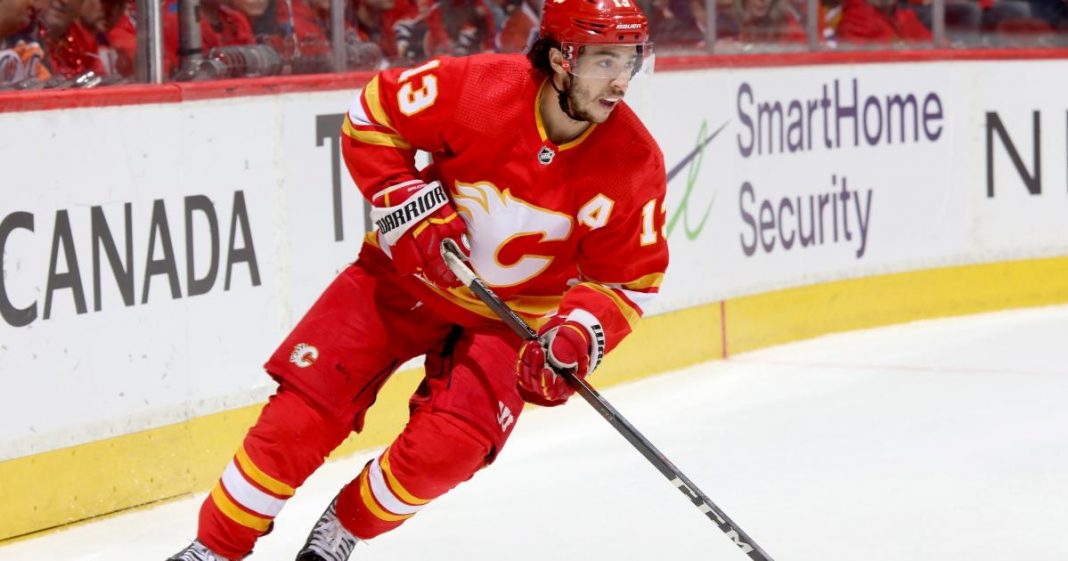 Johnny Gaudreau, the top free agent on the market, stunned the NHL world Wednesday with his decision about his new team.

The Blue Jackets announced they had signed the former Flames winger to a seven-year contract. Gaudreau rebuffed a larger contract offer from Calgary to head to Columbus.

“(Gaudreau) is an elite player with great character that makes the players around him better. We are thrilled to add a player of his caliber to our group. This is an exciting day for our franchise, our fans and the city of Columbus,” Blue Jackets general manager Jarmo Kekalainen said in a statement.

Gaudreau had been linked to several Eastern Conference teams, including the Flyers, Devils and Islanders. Columbus was only mentioned late as a potential sleeper. It was reported earlier in the day that the Blue Jackets were not viewed as a likely destination and that the decision would come down to the Devils or the Islanders.

#CBJ have not been seen as a likely destination for free agent forward Johnny Gaudreau. It’s reportedly down to #NJDevils or #NYI.

But word across the #NHL is that GM Jarmo Kekalainen and staff have made a major play for Gaudreau today.

Gaudreau is coming off a career year in Calgary with 40 goals with 75 assists. His 115 points were second only to the Oilers’ Connor McDavid. He finished fourth in the Hart Trophy voting and was named to the All-Star team.

The Sporting News breaks down Gaudreau’s shocking decision to sign with Columbus.

Why did Johnny Gaudreau sign with the Blue Jackets?

The question on everyone’s mind is: Why Columbus?

Gaudreau has yet to comment on why he made the decision that has puzzled hockey fans who expected him to sign closer to his hometown in New Jersey.

While Columbus is closer to his hometown than Calgary, it is still much farther than the other top suitors. Gaudreau is also leaving money and an extra year on the table in choosing to go to Columbus.

Though the Blue Jackets are coming off a 37-38-7 season, there is reason for optimism within the organization. They boast a young core with stars like Zach Werenski, Cole Sillinger, Kent Johnson and Patrik Laine, and they improved their defense by selecting David Jiricek and Denton Mateychuk in the draft.

The Blue Jackets have historically not made major splashes in free agency. In fact, stars like Sergei Bobrovsky and Artemi Panarin have left the team in recent years to sign major deals elsewhere.

“It’s a disappointing day, to say the very least,” Treliving told reporters, per Sportsnet. “I sat in front of you at the end of our season and I think my line was we would move heaven and earth. I can assure our fans we did everything possible to keep John in Calgary.”

Where is Johnny Gaudreau’s hometown?

Part of the reason the Flyers, Devils and Islanders were considered among the early non-Calgary front-runners was that Gaudreau hails from the Philadelphia area. He was born in Salem, N.J., and raised in Carney’s Point, N.J. He attended high school in Gloucester City, N.J., though he graduated in Dubuque, Iowa, where he was playing in the United States Hockey League.

Gaudreau’s agent told Sportsnet’s Elliotte Friedman that Gaudreau’s exit from the Flames was a family decision, building on previous reporting that he wanted to be closer to his family in New Jersey.

Earlier on Wednesday, Flyers general manager Chuck Fletcher said the team was finished with free agency, citing a lack of cap space, according to the Philadelphia Inquirer’s Giana Han.

Chuck Fletcher announces they are done with the free agency market. They are officially out on Johnny Gaudreau. Says the reality is, they didn’t have the cap space.

That left just the Devils and Islanders in the sweepstakes, The Fourth Line’s David Pagnotta reported. Or so everyone thought.

Devils and Islanders in a battle for Gaudreau? Might be down to them unless someone jumps back in last minute.

According to Google Maps, it is a nearly eight-hour, 500-mile drive from Columbus to Carney’s Point.

The contract agreement with Gaudreau happened not long after Columbus signed Gudbranson to a four-year, $16 million contract

Columbus will now look to sign Patrik Laine, a restricted free agent, to an extension. Laine was acquired with center Jack Roslovic from the Jets for Pierre-Luc Dubois in an early-season trade last season. Laine scored 26 goals and had 30 assists in 56 games for Columbus.

#CBJ say signing of Johnny Gaudreau does not preclude them from signing Patrik Laine, who is currently an RFA. They can keep them both, but other moves are now necessary.

According to CapFriendly, the Blue Jackets are projected to have just over $3 million in cap space remaining, which means they will need to clear space to sign Laine to a new deal.

Gaudreau was part of a top line in Calgary that was one of the best in the league. He played alongside center Elias Lindholm and left winger Matthew Tkachuk. Last season, Lindholm had 42 goals and 40 assists while Tkachuk had 42 goals and 62 assists.

If the Blue Jackets retain Laine, Gaudreau would likely be placed on a line with Roslovic at center and Laine on the right wing. Roslovic had 22 goals and 23 assists for Columbus last season. Should the team fail to re-sign Laine, then the top line would likely be Gaudreau on the left wing, Roslovic at center and Gustav Nyquist on the right wing. Nyquist had 18 goals and 35 assists for the Blue Jackets in 2021-22.