What’s next for Sam Darnold after Baker Mayfield trade? Panthers QB poised to be an expensive backup in 2022 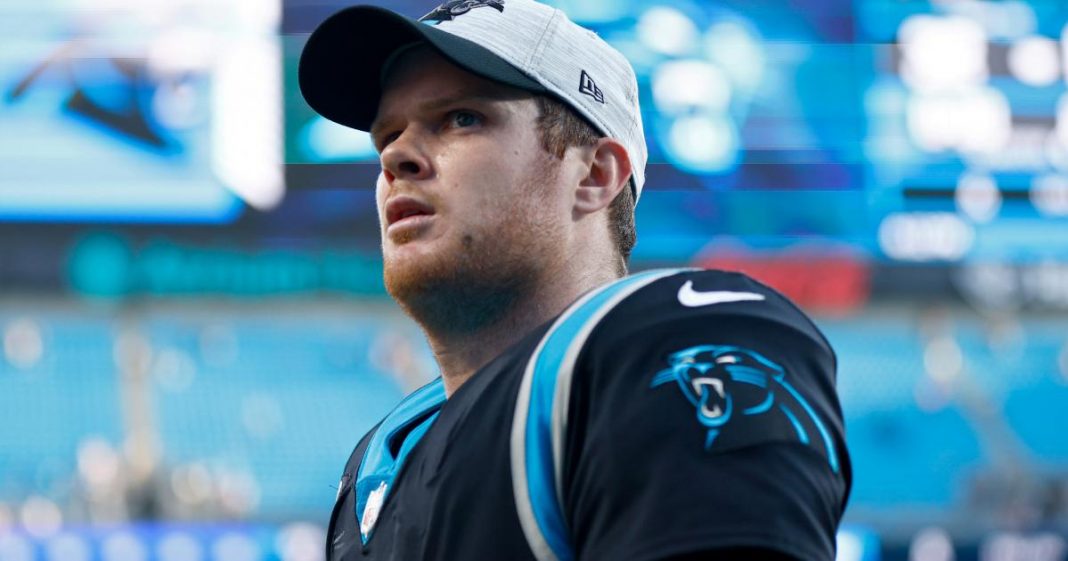 The Panthers made a much-anticipated trade on Wednesday when they acquired Baker Mayfield from the Browns in exchange for a conditional 2024 fifth-round pick.

Mayfield had long been available after he requested a trade away from Cleveland after free agency started in mid-March. The Browns were rumored to have an interest in Deshaun Watson, and once those rumors leaked, Mayfield wanted out of Cleveland.

The trade took a while to happen thanks to the Browns’ hope that Mayfield might be willing to start for Cleveland if Watson faces a significant suspension. When it became apparent that wasn’t going to happen, the Browns offloaded Mayfield for the maximum value they could receive: an early Day 3-pick.

Mayfield will now look to resurrect his career with the Panthers after an injury-plagued 2021 season. His attempt to do that will almost certainly come at the expense of Sam Darnold.

Darnold, who the Panthers acquired in a massive trade last offseason, now doesn’t have a clear path to the starting quarterback job. Moreover, he may no longer be guaranteed a roster spot in Carolina, depending on how training camp goes.

So, what might be next for Darnold? Here’s what the former No. 3 overall pick’s future in Carolina — or elsewhere — currently looks like.

What’s next for Sam Darnold?

Darnold’s focus for most of the offseason was on winning the Panthers’ starting quarterback job. He was supposed to compete for it with Matt Corral while PJ Walker had an outside chance to get involved in the race.

Now, things are a lot different.

Mayfield was acquired to serve as an upgrade over Darnold and his career track record with the Browns has been better than Darnold’s with both the Jets and the Panthers. Below is a look at the statistical comparison between the two since they both entered the NFL during the 2018 NFL Draft.

Not only has Mayfield posted better numbers than Darnold overall, but he has also led his team to a postseason appearance and win. That makes Mayfield look like the team’s likely starter even though the Panthers are planning a competition between him and Darnold, per NFL Network’s Mike Garafolo.

Sam Darnold had a good spring for the #Panthers and they’re by no means handing the job to Baker Mayfield. There will be a training camp competition between the 2018 Nos. 1 and 3 overall picks.

But even that job isn’t a secure one for Darnold. Sure, he should probably be the favorite to win it given that he has more upside than Walker and is more proven than Corral. That said, the Panthers just spent a third-round pick on Corral, so if they like him enough, he could emerge as the team’s preferred top backup.

If Darnold is relegated to third-string duty, some may wonder if the Panthers would part with him. The short answer is that they would probably like to if they could. However, Carolina wouldn’t create any cap space or save any money by releasing Darnold from his one-year deal worth roughly $18.86 million. As such, they probably wouldn’t part with him unless they could trade him to a team that is willing to eat at least some of his salary.

It may be hard to do that. So, for the time being, Darnold seems destined to serve as Mayfield’s backup and will relieve his fellow 2018 draftee if Mayfield’s troublesome shoulder injury gives him any issues in 2022.

MORE: Baker Mayfield will get a chance for immediate revenge against Browns

So, to recap, for the time being, it appears that Mayfield will top the Panthers’ depth chart with Darnold serving as the backup. Corral is the wild card while Walker and undrafted rookie Davis Cheek are currently on the outside of the roster bubble looking in.

In all likelihood, the Panthers will keep three quarterbacks on the 53-man roster. So, at least two of the players below will need to be released, placed on IR or moved to the practice squad before the season begins.

BENDER: Browns further push their chips all in on Deshaun Watson with Mayfield trade

Which teams could pursue Sam Darnold if Panthers part with him?

There remains a slim chance that the Panthers could find a suitor for Darnold on the trade market. And if not, they could just decide to eat the $18.86 million owed to him if they like Corral and Walker better as backups to Mayfield.

If Darnold does shake loose, a handful of suitors may have an interest in him as a reclamation project. Here’s a run-down of the teams that could at least kick the tires on him as they figure out their quarterback rooms.

The Seahawks were among the teams connected to Mayfield during the 2022 NFL offseason though recent reports suggest that they were never that interested in him. Even still, Seattle has Drew Lock and Geno Smith set to battle for its quarterback job, so their position is far from settled. Maybe they will be willing to take a chance on Darnold if neither Lock nor Smith has impressed them thus far.

The 49ers don’t need a quarterback right now, but they could need a backup-type in the near future. Jimmy Garoppolo remains on the trade market and San Francisco is looking to trade him to allow Trey Lance to start. If the 49ers do move Jimmy G, they could roll with Nate Sudfeld and Brock Purdy as their backups, but adding Darnold to compete with Sudfeld isn’t a bad idea.

I know, I know. If the Browns were going to trade for Darnold, why wouldn’t they take him back in a Mayfield swap? It’s not that simple, as Cleveland still doesn’t know for how long Watson will be suspended. If he gets a full-year ban, the Browns may want to add another quarterback to compete with Jacoby Brissett and Josh Dobbs for playing time. Darnold isn’t a sexy option, but the Browns can afford him. They would probably pursue Garoppolo before Darnold, but the latter can’t be ruled out pending Watson’s status.

The Texans have Davis Mills set to start at quarterback with another young veteran, Kyle Allen, backing him up. They could continue to hoard young signal-callers by adding Darnold in the hope that he can live up to his potential as the former No. 3 overall pick in the 2018 NFL Draft. If neither Mills nor Darnold works, the Texans would likely fall flat and end up with one of C.J. Stroud or Bryce Young early in the 2023 NFL Draft. That sounds like an appealing short-term plan for one of the NFL’s least talented rosters.

Andy Reid has gotten the most out of his quarterbacks over the years and Patrick Mahomes’ current backup is 37-year-old Chad Henne. Darnold could learn for a bit under Mahomes and hope to improve his value for a future free-agent deal, much like Mitchell Trubisky did with the Bills in 2021.

Detroit’s backups to Jared Goff are Tim Boyle and David Blough, so it’s not like the team is flush with quarterback talent. Taking a chance on Darnold would be a nice buy-low opportunity for the Lions, though they probably wouldn’t trade for his contract considering what they are paying Goff to be their starter.