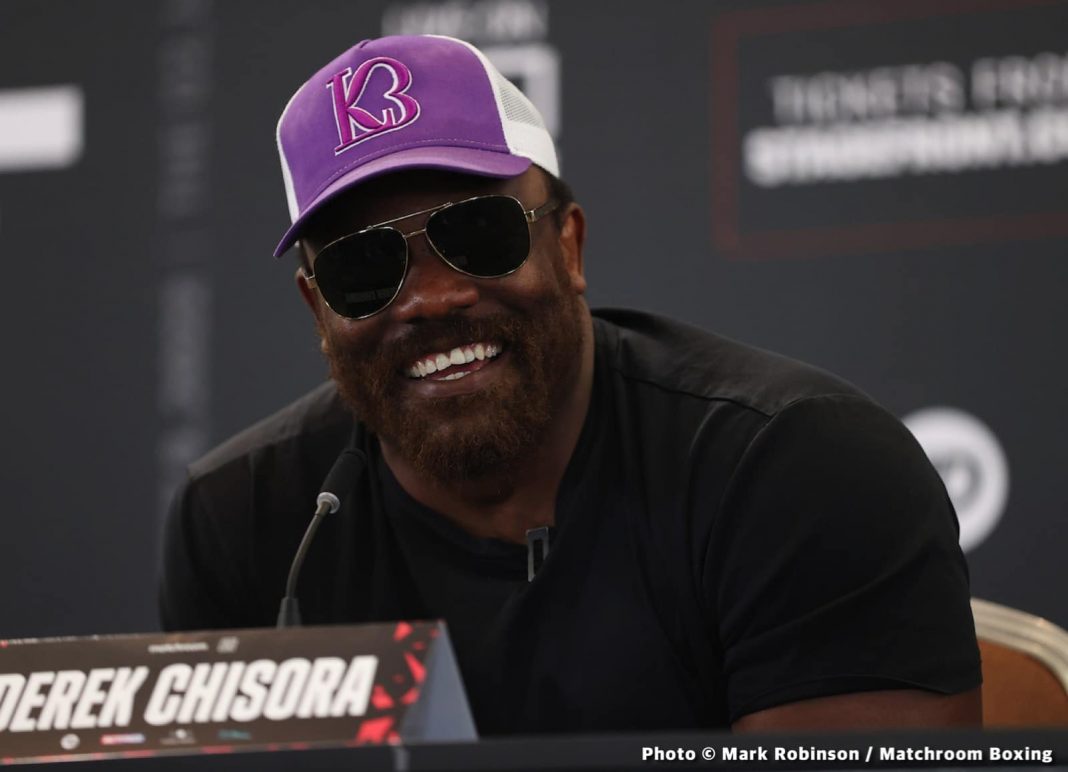 By BN24 staff: “This is what I’m going to say to all those people writing all that sh*t: Go f*ck yourselves,” Derek Chisora exclaimed to IFL TV in reference to fans calling for him to retire, in the aftermath of his rematch points loss to Joseph Parker just before last Christmas.

This Saturday night, at London’s O2 Arena and live on DAZN, Derek Chisora returns to action in a rematch with longtime contender Kubrat Pulev. Another loss for the Brit would see him having accrued four defeats in a row, a devastatingly disappointing run of form, but also a testament to his willingness to fight absolutely anyone.

Chisora belongs in the ‘70s and ‘80s, during the glory days of the glamour division when heavyweight contenders would regularly fight each other rather than avoid one another. It is this factor that has seen him regularly headline two of the biggest arenas in the UK – Manchester and the O2 – often on Sky Sports pay-per-view.

There have been many highs and lows since he debuted in 2007.

Kissing Carl Baker at a weigh-in; spitting water in the face of Wladimir Klitschko during ring introductions for his world heavyweight title fight against Vitali, who he also slapped at the weigh-in; a violent brawl involving a glass bottle against David Haye; throwing tables at a press conference with Dillian Whyte; threatening to pull out of the original fight with Joseph Parker over the coin toss to decide who walked first to the ring.

And that’s just outside the ring.

Some of those incidents resulted in fines, costing him around £100,000 of his career earnings.

Sure, he might have lost every one of those bouts, but the list of his victims is admirable as well: David Price, Artur Szpilka, Carlos Takam, Kevin Johnson, Edmund Gerber, and Malik Scott amongst others.

The fans choosing to spend their hard earned money watching me fight brings me so much joy. I feel the love, it’s unbelievable. On Saturday I’ll give it my all for you 🙏🏾 #warchisora #ChisoraPulev2

The 38-year-old is rarely in a boring fight (ignoring his win over an unwillingness to engage Senad Gashi in 2019). The eight-round war with Takam was brutally glorious. That stoppage and his knockout of Szpilka were probably his premier moments as a prizefighter to date. However, occasionally lacking motivation has caused Chisora to look somewhat disinterested in some bouts, notably in a European title challenge against Agit Kabayel in Monaco.

His 2011 points loss to Robert Helenius was filed under the ‘robberies’ section. It was a bitter pill to swallow for Chisora, yet in a twist of fate that ‘loss’ was followed by his one and only shot at world honours, in a points reverse to WBC world champion, Vitali Klitschko – no shame in that.

After the 2012 knockout loss to David Haye – in a grudge match at Upton Park that gripped the nation – a solid five-fight win streak was only stunted by the world’s best heavyweight, Tyson Fury.

Ironically, considering the bad blood and violent atmosphere that Chisora and Haye battled in, the latter has managed the twilight of Chisora’s career. By his side, the charismatic Don Charles guided the early years before the likes of Steve Broughton, Dave Coldwell, and even Buddy McGirt graced his corner.

He’s earned a lot of money from the sport – the hard way – and deserves every single penny. The proud Briton hopes to pocket more cash from his profession and doesn’t believe that fans and journalists have the right to tell him to walk away from boxing.

He has zero time for keyboard warriors or overly opinionated fans and he doesn’t care what any critics think.

Eddie Hearn has mentioned the ‘r’ word previously when taking into account the plethora of wars and hard fights that Chisora has partaken in. He simply doesn’t want to retire, but a loss on Saturday could be the catalyst for him to finally consider hanging up the gloves.

Kubrat Pulev beat Chisora in 2016 for the vacant European crown. The Bulgarian only loses to elite fighters (Anthony Joshua and Wladimir Klitschko) but is on the wrong side of 40. Such is Chisora’s ambition, he refuses to take any easy fights. Fellow contender Adam Kownacki reportedly agreed to terms but ultimately didn’t take the fight.

“For me, my plan is my fans – that is it. Entertainment. Do you understand? That’s what I like,” Chisora said at the kick-off press conference for Chisora vs. Pulev 2. “I’ve lost so many fights, I’ve won a couple of fights. I’ve won things that I wanted to win. I prefer fighting.”

“I know what I’ve got, and I sell a product to people who want to have that product. And that product is war.”

Pulev needs the victory, even if it comes in a dull fashion simply using his jab, to push himself towards another world title shot; Derek simply wants to win to entertain his legion of fans. He doesn’t care about belts.

Time is running out for these two respected heavyweights to attain glory inside the ring. Father Time will come for them soon.

British fight fans will miss Chisora when he’s retired. Who can forget his infamous analogy directed at Dillian Whyte in 2018:

“Have you ever taken those pills, the laxatives,” he said to Whyte in an episode of The Gloves Are Off hyping their rematch.

“You know the ones you take, you pop and you wait for 20 minutes and then you go to the toilet and they go through you. I’m going to go through this man.”

As the fight poster suggests, if Chisora gets his way, expect ‘Total Carnage’ this Saturday night on DAZN.

On the undercard, Israil Madrimov battles Michel Soro in a rematch of their controversial first clash. Soro was stopped at the end of the ninth round, despite many of the clean shots that hurt him landing well after the bell. The WBA ordered an immediate rematch and the victor will earn a shot at the 154-pound world title held by Jermell Charlo.

Former British and Commonwealth champion, Felix Cash looks to stay undefeated with a win over Vaughn Alexander in a ten-rounder for a regional WBA middleweight strap. The American appeared shopworn and heading for gatekeeper status, but a shock win against Luis Arias last December in L.A. has given him hope of some big paydays.

Caoimhin Agyarko faces tough Pole, Lukasz Maciec, who took Anthony Fowler the distance in February. The Irishman drops to super-welterweight for a fight he’ll be expected to win.

Elsewhere, heavyweights Fabio Wardley and Solomon Dacres should both remain unbeaten. Prospects Ramla Ali and Yousuf Ibrahim round out the card.