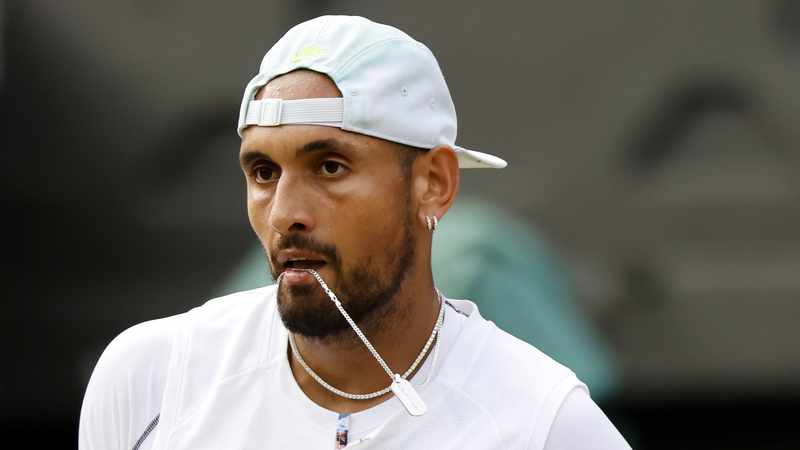 London – Nick Kyrgios reached the Wimbledon quarter-finals on Monday and reflected on his dark days when he had to be hauled “out of a pub at 4:00 am” before facing Rafael Nadal at the All England Club.

The volatile Australian overcame a right shoulder injury to defeat Brandon Nakashima of the United States 4-6, 6-4, 7-6 (7/2), 3-6, 6-2 to return to the quarter-finals for the first time in eight years.

Back on his best behaviour after his bitter third-round clash with Stefanos Tsitsipas, the 27-year-old Australian is taking great delight in proving his critics wrong.

“I sit here now in the quarter-finals of Wimbledon again, and I just know there’s so many people that are so upset,” Kyrgios said.

Kyrgios has endured a rollercoaster career since breaking through as a 19-year-old at the All England Club in 2014, where he shocked Nadal as a 144th-ranked wild card.

Three years ago, however, Nadal gained revenge. It was one of Kyrgios’s many low points in a controversy-heavy career.

“My agent had to come to force me out of a pub at 4:00 am to play Nadal second round, on Centre Court, Wimbledon,” he said. “I’ve come a long way, that’s for sure.”

Kyrgios has made the quarter-finals having played two five-setters, thrilled and confounded spectators while picking up $14,000 in fines.

He has also showcased some breathtaking shot-making, taking his aces count past the 100 mark and hitting a total of 257 winners over four rounds.

He has been broken just five times.

“I just feel like I’ve been through so much. I feel like I’m able to stay more composed,” he said.

“Today is probably the first time in my career where I wasn’t playing well, regardless of playing Centre Court Wimbledon, fully packed crowd, I was able to just say, ‘Wow, look how far I’ve come’, to myself.”

World number 40 Kyrgios will next face Chile’s Cristian Garin for a place in the semi-finals.

"I need a glass of wine for sure tonight!"

It will be Kyrgios’s first quarter-final at the Slams since the 2015 Australian Open.

“I have played a lot of tennis in the past month and a half,” said Kyrgios, shrugging off his shoulder problem.

“His level didn’t drop but my five-set level is pretty good and I’ve been here before, done it before and that is what I was thinking about.

He added: “I need a large glass of wine tonight for sure.”

Unlike the fireworks and controversy of his win over Tsitsipas, Kyrgios cut a subdued figure in the Centre Court sunshine.

He had one minor grumble over the state of the court on one of the baselines before he started to feel his right shoulder.

Serve dominated the opener until Nakashima grabbed the only break in the 10th game.

Kyrgios, however, broke for 2-1 in the second set before calling for a medical timeout to treat his right shoulder.

The trainer reappeared again to massage the Australian’s shoulder before Kyrgios levelled the tie.

Seemingly against the odds, he then stormed through the third-set tiebreak, wrapping it up with a flashing crosscourt forehand.

Back came Nakashima in the fourth, breaking for 4-3 and taking the set courtesy of a lazy Kyrgios service game.

“At the end of the fourth, complete rope-a-dope tactic. I just threw away that service game,” he claimed.

“I knew he was in a rhythm. He was starting to get on top of me. I kind of just wanted to throw him off a little bit. It worked.”

Despite looking down and out, Kyrgios rallied in the decider, breaking in the third and fifth games to secure the win.