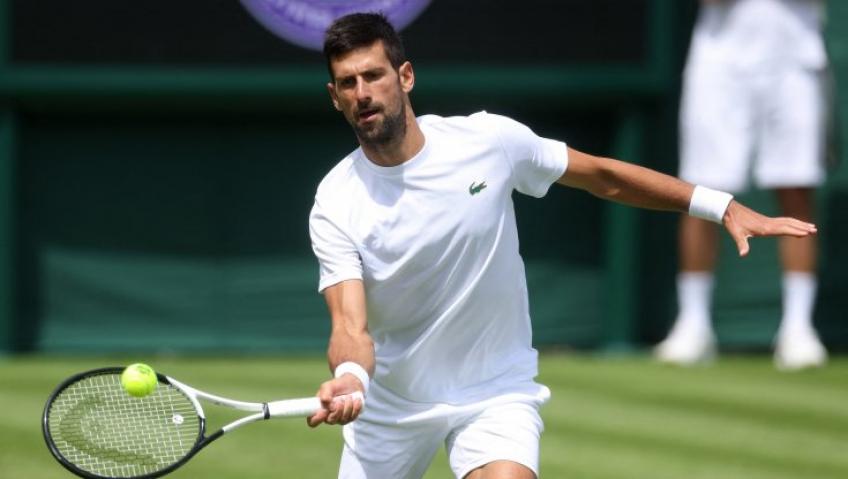 Six-time Wimbledon champion Novak Djokovic advances to his 13th quarter-final at the All England Club. Novak dispatched Tim Van Rijthoven 6-2 4-6 6-1 6-2 indoors on Center Court in the last match of Sunday’s program to meet in the quarterfinals.

The Dutchman fought well in the second set and prevailed in the closing stages to level the score, before the Serb turned 180 degrees in sets three and four to stay on the title trail. Novak played better on the first serve and made the difference on the second, surviving his opponent’s 20 aces and earning no fewer than 17 break point opportunities.

Djokovic converted six to control the score and got a break to seal the win in two hours and 37 minutes. Novak dominated his shots well with 28 winners and 19 unforced errors, while his rival posted 41 direct points and 53 errors.

Djokovic had chances to lengthen the second set, wasting multiple break chances at 4-5 before shifting into a higher gear from the third set to put his opponent behind. Novak will meet Jannik Sinner in a semi-final battle after the Italian dispatched Carlos Alcaraz in four sets earlier today.

The Serbian, six-time champion of this tournament, continues to advance towards the seventh crown in the Cathedral of tennis, showing an increasingly solid tennis, mentalized in closing the gap with Rafael Nadal in the fight for the most Grand Slams.

Yesterday, Novak Djokovic narrowly avoided the famous 11 p.m. curfew which would have forced him to return to center court on Monday to finish his duel. A situation linked to programming times that are too late even though there are not many games left to play.

Novak therefore stepped up to the plate during his press conference to get things moving. “We know that Wimbledon still respects tradition, which is why the start times for the two main events have not been changed for many years, although I have heard some people talk about the option to change the times.

. Honestly, I don’t see why we couldn’t start a little earlier, especially now that there are interviews on the ground, which was not the case a few years ago. Also, if you’re scheduled last position, you know you’re probably going to end up inside, which changes the conditions, the style of play and the way you move.” Novak Djokovic, the 20-time Grand Slam winner, is in exceptional form at the Wimbledon Championships this year.