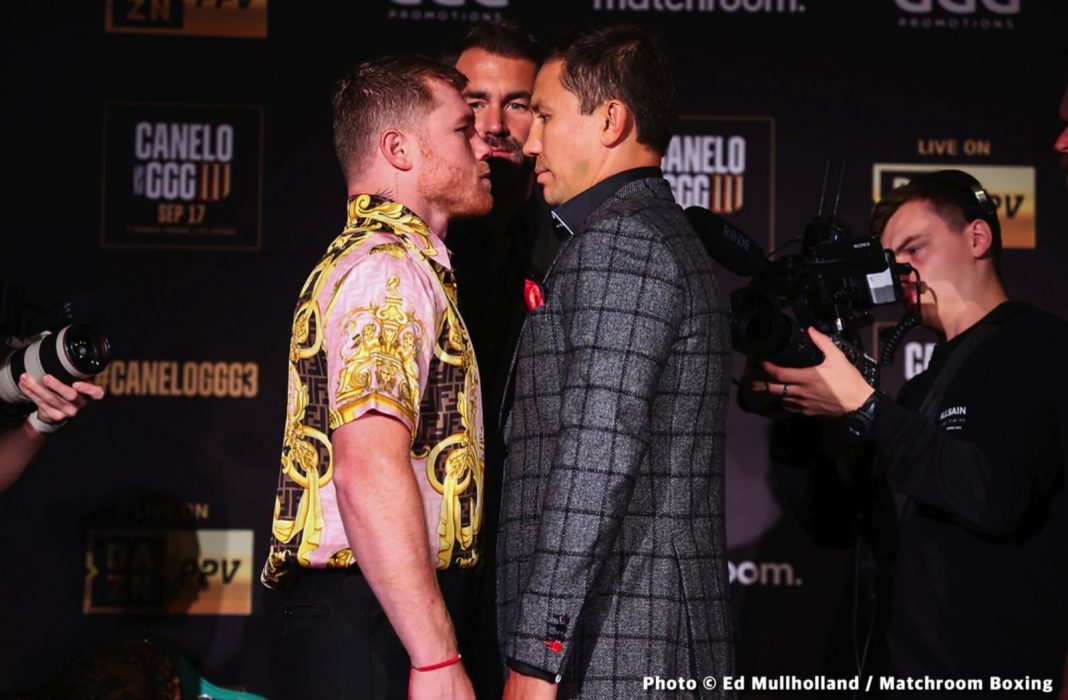 By Jim Calfa: Canelo Alvarez says he only has two fights in his mind right now, his trilogy match against Gennady Golovkin in September and a rematch with Dmitry Bivol.

Fans would like to see Canelo face Jermall Charlo & David Benavidez at 168, and then IBF/WBC/WBO 175-lb champion Artur Beterbiev.

With Canelo wanting to avenge his loss to WBA light heavyweight champion Bivol (20-0, 11 KOs) from last May, we could potentially see their rematch this year if the Mexican defeats Golovkin and doesn’t get too beaten up in the process.

Given how grueling each of the first two fights with GGG was for Canelo, it’s possible that he’ll choose to schedule the rematch with Bivol in May 2023 rather than jump back in the ring in December.

Canelo says he doesn’t want to look beyond those two fights, as they mean a lot to him. Golovkin (42-1-1, 37 KOs) and Canelo will battle for the third and likely final time on September 17th on DAZN at the T-Mobile Arena in Las Vegas.

“Not many times. I watch all my fights twice and that’s it,” said Canelo Alvarez to That Boxing Writer when asked how many times has he re-watched his two fights against Gennady Golovkin.

“I think the second one was my best game plan. That’s the game plan to do in this fight,” said Canelo about his second contest with Golovkin in 2018.

“I see this [the trilogy] as similar to the second fight, but I feel more strong, more mature in the ring. So that’s going to make a difference. He’s strong, but I don’t know.

“I need to fight him and then I can answer the question,” said Canelo when asked if Golovkin has gotten stronger since their second fight in 2018.

“But I don’t care if he’s the same guy or not. I’m going to prepare myself for the best Golovkin. If not, I really don’t care. That’s my opponent right now, and I really want to beat him.

“Ask Caleb Plant,” Canelo said about whether he changes the way he fights an opponent if he dislikes them. “It’s just different. I train with a different mindset, and I use my anger in my favor, of course.

“I just want to train like never in my life. I think Golovkin a little more,” said Canelo when asked if Golovkin made him angrier than Caleb Plant.

“Caleb Plant is a person who tells you what he thinks and tells you the truth. Golovkin, he tries to pretend that he’s another person and he’s not. He doesn’t have the balls. So, I hate that kind of people more.

“Every fight, I learn from every fight, and I watch the mistakes I made in the fight and, of course, I’m going to go in the gym and fix my mistakes.

“I just have two fights in my mind right now – Golovkin and a rematch with Bivol. Those are the only two fights I have in my short future,” said Canelo.