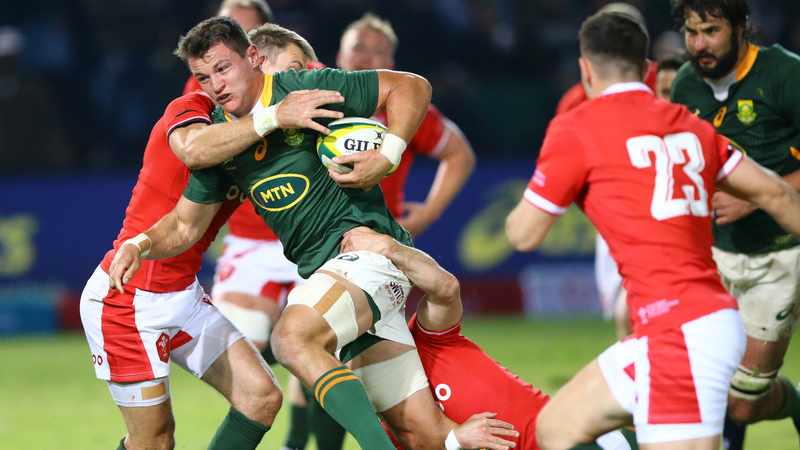 Pretoria – When Elrigh Louw arrived at Loftus Versfeld early Saturday afternoon, he was a Blue Bulls player but by the time he left, he could proudly call himself a Springbok.

The 22-year-old made his debut for the Boks against Wales, coming on in the 50th minute to replace skipper Siya Kolisi, enjoying a hearty welcome from his home crowd. It was a tense time to make the substitution, the Boks in the throes of making a comeback and still trialing the Welsh 10-18.

It was through the efforts of Louw and the rest of the ‘Bomb Squad’, coupled with an early tactical switch at flyhalf, that finally pushed the Boks towards victory. It was, nevertheless, an anxious 32-29 last-gasp victory.

It was a Test match, however, that Louw will never forget.

“I actually don’t have the words,” said Louw after the game on Saturday, as he reflected on his debut in the post-match media briefing. “It is an honour to achieve this dream.

“We were under pressure when we came on,” he continued in Afrikaans, “but I feel that the guys that came on brought some energy and when we got a little bit of momentum, we knew what was going to happen and how we would achieve it.

“I knew exactly what was needed from me when I jogged onto the pitch. The coaches put no added pressure on us. We knew the details.

“If you look around and you see the manne that you are playing with, you automatically get confidence from that and then you can just enjoy the moment.”

In the 30-odd minutes on the pitch, Louw enjoyed a handful of moments with ball in hand. He came desperately close to scoring a try, running a tight line at pace that cut open the Welsh defence. He was tackled just meters short of the line, Cheslin Kolbe finishing off the breakout with a try in the corner.

Said Louw of that moment: “I had one thing in mind and that was to dot the ball over on my debut but I think they tied my shoelaces quite well. It wasn’t meant to be but luckily Chessie scored in the corner there.”

It wasn’t all flawless, though.

Louw and the Bok pack found themselves on the receiving end of conceding a maul-try, which levelled the score 29-29. It would have come as an embarrassing moment for the Bok forwards, as they were overpowered by a Wales team sanctioned down to 13 men.

Louw agreed that granting such a try to the visitors was impermissible.

The Boks travel Sunday to Bloemfontein to set up shop in the City of Roses for the second Test this Saturday at Free State Stadium, and Louw will hope for a second showing in the Green and Gold … and a much improved performance from the Boks overall.