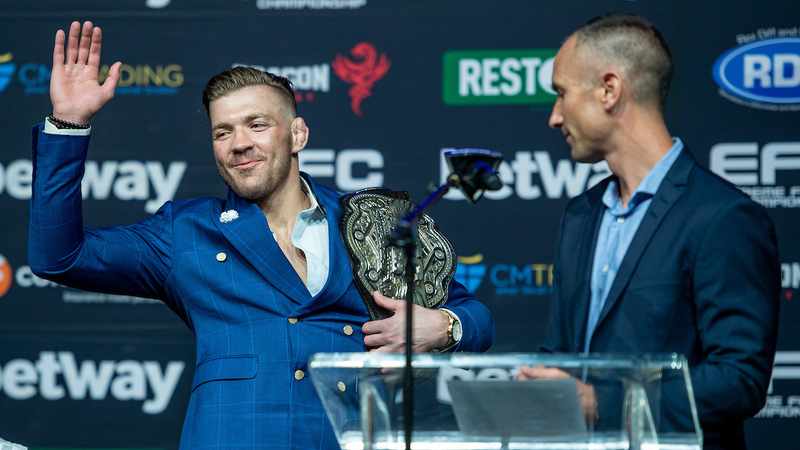 Johannesburg – UFC star Dricus du Plessis did not hesitate to represent his Mother Tongue in Las Vegas when a South African journalist addressed him in Afrikaans during a media scrum.

For those who do not understand Afrikaans, Du Plessis said the following: “It feels unbelievable to represent South Africa. To sit here and speak Afrikaans knowing that there are millions of people out there who understand me, that alone is unbelievable and a huge honour for me. I will carry the South African flag once again on the biggest platform in the world and show what our people can do.

“The hope that it gives, the inspiration it brings to everybody in South Africa … There is nothing that brings South Africans more together than sport, and I can’t wait to have the entire nation on its feet once again tomorrow night.”

More than 90 percent of the media houses present at the scrum could not understand what Du Plessis was saying, but the sparkle in his eye that speaking his mother tongue brought was clear to all present.

Sunday night’s bout is a huge opportunity for Du Plessis to break into the top 15 of the Ultimate Fighting Championship’s middleweight division and Du Plessis is keen on grabbing the opportunity with both hands especially considering the disappointment he has endured lately.

Du Plessis could not have asked for a better start to his run in the UFC after beating Brazil’s Markus Perez (13-6) and USA’s Trevin Giles (14-4). However, his last few bookings have been nothing short of frustrating.

After suffering injury in December last year, Du Plessis was forced to pull out of a fight with Brazil’s Andre Muniz (22-4) before he got another offer in the form of USA’s Chris Curtis (29-8) in April this year on the UFC 273 card. Curtis was forced out due to injury before the promotion offered another American, Anthony Hernandez (9-2) the fight with Dricus.

The fight was secured and got millions of Africans excited as it meant that Du Plessis had a shot at cracking the top-10 should he beat  Gastelum until the latter called off due to injury the same week of the fight.

It was a frustrating time for Du Plessis, but he rolled with the punches and put in the work, biding his time until this opportunity arrived which also offers him a shot at jumping the ranks should he overcome 12th-ranked Tavares.

A win over Tavares also takes Du Plessis one step closer to the title which will be on the line in the main event of the night when Nigerian-born and New Zealand-bred Israel Adesanya (21-1) defends his title against USA’s Number two contender, Jared Cannonier (15-5).

Fight fans can catch the late prelims and main card on SuperSport tomorrow morning. The prelims start at 1am and the main card drops at 4am (South African Standard Time).