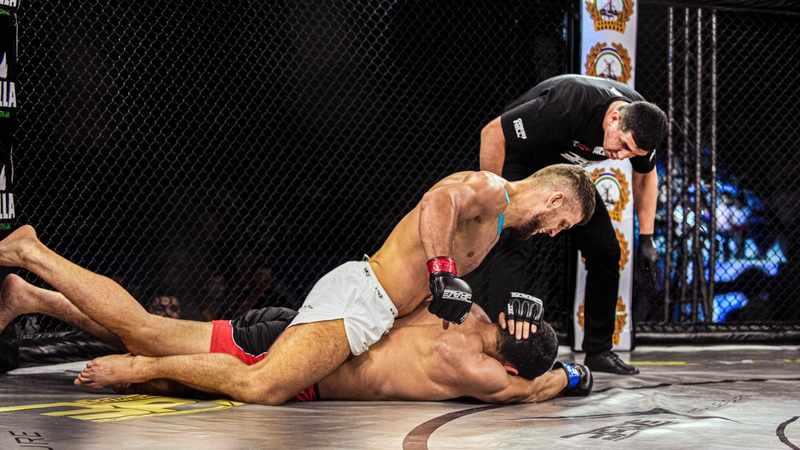 Johannesburg – Ismail Naurdiev is loved by the fans.

Following his performance at BRAVE CF 59, the promotion is set to show him the same kind of love and potentially gift him with a title shot.

Austria’s Naurdiev (22-5) delivered an impeccable showing in Bukhara, Uzbekistan recently when he beat Kyrgyzstan’s Bekten Zheenbekov (5-1) via TKO (due to strikes) in their co-main event bout.

Naurdiev proved once again that he has something special the promotion can work with – both inside and outside the cage – as his fight skills were matched up with a memorable promo to the Super Welterweight title shot.

“Assalamu Alaikum (Peace to you), Bukhara. Uzbekistan, I love you,” said the fired-up and fan-friendly fighter to the local crowd who loudly appreciated and cheered on his acknowledgement of Uzbekistan being the 27th nation to host a BRAVE CF event.

When asked where did that ruthless finish – which saw him dispatch of his opponent early in the first round – come from, Naurdiev – usually quick with a barb – was once again true to form, even dropping an expletive in the mix.

Naurdiev’s BRAVE CF 59 Super Welterweight bout – in association with Amir Temur Fighting Championship – was listed as a potential Number One Contender fight for the division’s belt and the Austrian wasted no time in reminding the promotion what he’d like next.

BRAVE CF remains the only promotion to adopt the newly-established Super Welterweight division in accordance with ABC (Association of Boxing Commissions) to provide fighters with more options to compete at their optimal weight.

Following a disappointing loss to Jordan’s Jarrah Hussein Al-Silawi (18-3) in April last year, Naurdiev applied him and invested countless hours into improving his game in preparation for a successful BRAVE CF future.

He then leveled-up and secured impressive wins with his first one coming against Nordic Europe’s Number One Welterweight, Finland’s Ollli Santalahti (13-4) at BRAVE CF 54 in Poland before his recent Uzbekistan showpiece.

He is now one step closer to donning BRAVE CF gold and he could not be more grateful for the opportunity.

“Thank you to BRAVE CF, Prince Sheik Khalid (bin Hamad al Khalifa, the founder), (President Mohammed) Shahid, the matchmakers and all the BRAVE CF staff. The BRAVE CF staff are all amazing! I love you all guys, thank you for the opportunity. Big shoutout to my team, Sanford MMA, Henri Hooft, Greg Jones, all the partners, my brother, the head coach of Tiger Muay Thai … everybody. A big thank you!” added Naurdiev before – in true celebratory fashion – showing off his dance and rap skills in the BRAVE cage.

The next BRAVE CF event will be BRAVE CF60 which sees top Super Lightweights Luan Santiago (16-6) take on Mihail Cotruta (13-2) in Goiânia, Brazil on July 30th.