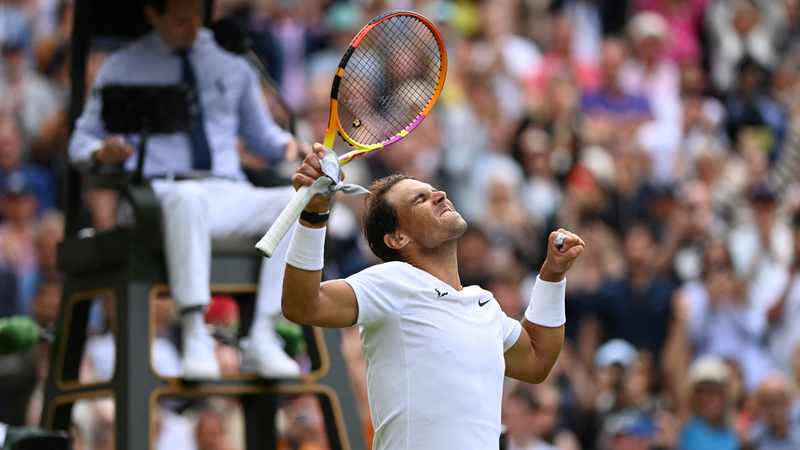 London — Rafael Nadal overcame a huge scare to reach the Wimbledon second round on Tuesday after title contender Matteo Berrettini was forced to pull out of the tournament with coronavirus.

Elsewhere on day two of the Championships, women’s top seed Iga Swiatek extended her winning streak to 36 matches and Serena Williams returned to singles tennis after a year away.

“Three years without being here on this amazing surface, it is amazing to be back and I can’t thank (people) enough for the support,” said the Spaniard, who has not played at Wimbledon since 2019.

“It is not a surface that we play very often, especially in my case. In the last three years I didn’t put any foot on the grass.”

The Spaniard appeared to be coasting to victory when he took a two-set lead but his Argentine opponent won the third set and then went a break up early in the fourth.

But the match suddenly switched gears as Nadal broke to level at 4-4, accompanied by roars from the Centre Court crowd.

He held serve and then broke again to seal the victory and will face Lithuania’s Ricardas Berankis in the next round.

There was a question mark over the Spaniard’s durability for the two weeks at Wimbledon having played the entire French Open with his troublesome left foot anaesthetised.

The 36-year-old second seed has since undergone a course of radiofrequency stimulation, a treatment aimed at reducing nerve pain in his foot and he looked mobile.

“Every day is a test,” said the two-time Wimbledon champion. “I am at the beginning of the tournament and everyone knows the difficult circumstances that I had.”

The early action at the All England Club on Tuesday was overshadowed by the announcement from Berrettini — last year’s runner-up — that coronavirus had forced him out of the tournament.

“I am heartbroken to announce that I need to withdraw from @wimbledon due to a positive Covid-19 test result,” the 26-year-old Italian wrote on Instagram.

Berrettini was widely regarded as one of the biggest threats to defending champion Novak Djokovic at Wimbledon, having captured back-to-back grass-court titles in Stuttgart and Queen’s.

He is the second man to withdraw from Wimbledon with Covid in two days after 2017 runner-up Marin Cilic of Croatia also tested positive.

The Italian was a potential semi-final opponent for Nadal.

It is business as usual at the Grand Slam this year after the tournament was cancelled due to Covid in 2020 and last year was played in front of reduced crowds.

The All England Club said in a statement that protocols remained in place to minimise the risk of infection.

Poland’s world number one Swiatek coasted into the second round with a routine 6-0, 6-3 victory against Croatian qualifier Jana Fett.

The French Open champion, who has won her past six tournaments, said she was relishing the atmosphere at the grass-court event.

“I feel I have only played 12 weeks of my life on grass but the whole atmosphere and tradition is pumping me up and just looking forward to the next matches,” she said.

Nick Kyrgios blasted fans’ “disrespect” as well as “90-year-old” officials after a fiery-five-set win over British wildcard Paul Jubb before admitting he spat towards one of his tormentors in the crowd.

“I’ve been dealing with hate and negativity for a long time,” said the Australian.

“Some spectators think there’s just no line there anymore. They can just say something and they film it and then they laugh about it.”

In the evening session, seven-time champion Williams was facing unseeded Harmony Tan of France in her first singles contest since an injury forced her to pull out of her first-round match last year.

Williams, 40, won the last of her Wimbledon singles titles six years ago but reached the final in 2018 and 2019.