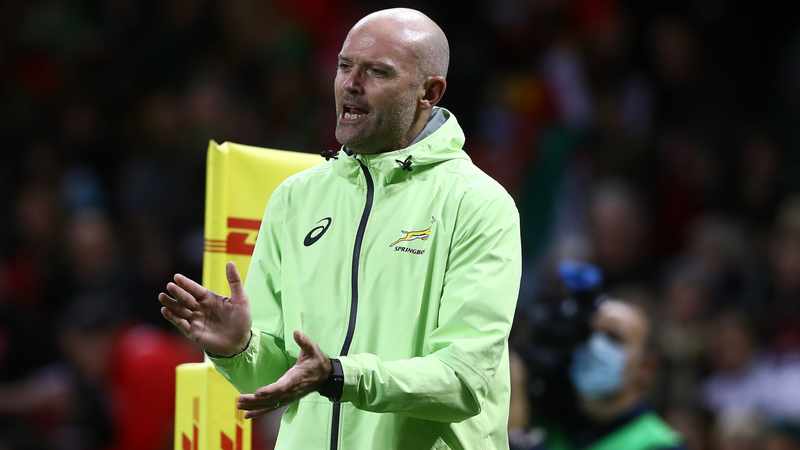 Durban – The importance of the Springboks hitting the ground running on Saturday against Wales in Pretoria was emphasised by coach Jacques Nienaber some time ago when he stressed he can only give newcomers a shot from a position of strength.

The Boks are just over a year out from the Cup in France and by the end of this year, Nienaber has said he needs to know his number one, two and three and more in every position.

Of course, he already has a good idea of how the players stack up, but injuries are a big part of the game while loss of form for some and acceleration in form of others has to be considered.

In March, when Nienaber spoke to the media for the first time this year, he hinted that if the Boks can knock over the Welsh in Saturday’s match and then in next week’s second Test in Bloemfontein, then he can test his depth in the final game in Cape Town.

If we cast our minds back to 2018 when England toured South Africa, the Boks — in their first outings under director of rugby Rassie Erasmus and Nienaber — won the first and second Tests, and then the team was changed up for the dead-rubber game. England comfortably won that game 25-10, and Bok fans were a little miffed, but that defeat was long forgotten when the Boks won the Cup a year later, beating England in the final, of course.

Balancing the need to win while ensuring your greater squad is in good shape is a great challenge for all national coaches as the Cup approaches, but Nienaber — and Bok fans will appreciate this — says nothing will undermine the Boks’ responsibility to win every match.

“Our country expects us to win each time we take the field and we fully embrace that,” Nienaber said. “A Springbok win puts smiles on faces and that is a wonderful responsibility to have.

“We have a plan to try and introduce our new players, and it will probably end up being injury-based, in any case, but it will never be at the risk of compromising our ability to win.”

As well as establishing depth, Nienaber says the series against Wales and the ensuing Rugby Championship must also be about the Boks growing their game. What worked perfectly in 2019 and even against the British & Irish Lions last year might not be enough to defend the Webb Ellis Cup next year.

“Looking at it from a rugby point of view, we are trying to transform and develop our game on different levels,” Nienaber explained. “Our review of 2021 revealed good and bad aspects of our game and there are definitely areas we have to improve, but I am obviously not going to talk about that in public.”

To that end, it is interesting to note a Sunday newspaper report that Nienaber is poised to give a debut to Stormers poacher Deon Fourie the man who made the second-most turnovers in the whole of the United Rugby Championship.

According to Rapport, Nienaber is considering using Fourie and Kwagga Smith off the bench on Saturday.

Both Fourie and Smith are renowned breakdown specialists and it is part of the plan to utilise the significant loose-forward stocks in the Bok squad.