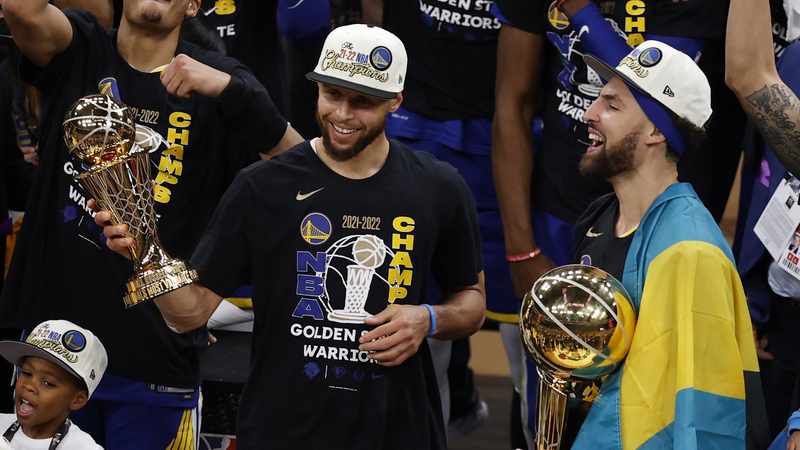 Boston – A dazzling performance from Stephen Curry powered the Golden State Warriors to a seventh NBA Finals crown on Thursday, securing a 103-90 victory over the Boston Celtics to clinch a 4-2 series triumph.

The 34-year-old Curry was named NBA Finals Most Valuable Player after the victory — the first time the four-time NBA champion has scooped the award.

“I’m so proud of our group, I thank god every day that I get to play this game with some amazing people,” an emotional Curry said afterwards.

“This is what it’s all about, especially after everything we’ve gone through in the past three years.”

The win completed a dramatic journey back to the pinnacle of the NBA for the Warriors, who just two seasons ago had the worst record in the league as the franchise battled injuries and the departure of key personnel.

“At the beginning of the season nobody thought we’d be here – except everybody on this court right now. It’s surreal,” Curry added.

“We were so far away from it. We hit rock bottom with injuries and the long road of work ahead, trying to fill in the right pieces with the right guys.

“You never take this for granted because you never know when you’ll be back here.”

Delighted Warriors coach Steve Kerr admitted the team’s fourth championship of his reign had been the most unexpected.

"Beginning of the season, nobody thought we'd be here except everybody on this floor right now." pic.twitter.com/tHBY3Alg5D

Curry, an ever-present throughout the highs and lows of the Warriors’ journey since 2015, led a balanced offensive effort as Golden State became just the second visiting team to lift the trophy on Boston’s home court after the 1985 Los Angeles Lakers.

Andrew Wiggins came up with 18 points, six rebounds, four steals and three blocks in a superb all-round display, while veterans Klay Thompson and Draymond Green chipped in with 12 points each. Jordan Poole added 15 from the bench.

The Celtics, trying to force a game seven, had opened with intent, racing into an early 14-2 lead against a Warriors side caught napping.

But Boston’s fast start was the cue for a spectacular burst by Golden State, who tightened their defense to secure key stops and then began to find the target at the other end.

After cutting the Boston lead to six points at 22-16, the Warriors pulled away, with Green, Curry and Poole all rattling in three-pointers to put Golden State into a 27-22 lead at the end of the first quarter.

Two more Poole three-pointers in the opening moments of the second quarter helped the Warriors sprint into a 15-point lead, up 37-22 after a 21-0 run – the largest run in NBA Finals history.

The Warriors maintained the 15-point advantage up to half-time, leading 54-39 at the break.

Curry ominously looked increasingly comfortable from beyond the arc, and a step back three from 28 feet put the Warriors into a 72-50 lead – a 22-point margin their biggest lead of the night in the third quarter.

But Boston refused to surrender, and Horford brought the Garden crowd to its feet after a layup and a free throw got the Celtics to within nine points of the Warriors at 74-65.

Green settled the Warriors nerves with an ice-cold jumper from 21 feet to help ensure the Warriors would take a double-digit advantage into the final quarter, leading 76-66.

The Celtics again chipped away at the Warriors lead, but every time they got to within single digits, Golden State managed to find a big play to extend their lead.

A key passage came midway through the fourth. A Brown three-pointer shrank the Warriors’ lead to just eight points at 86-78, but Wiggins then rammed in a corner three to make it 89-78 and Green followed with a dunk to put the Warriors 13 clear.

That margin held as the Warriors celebrated their seventh title.