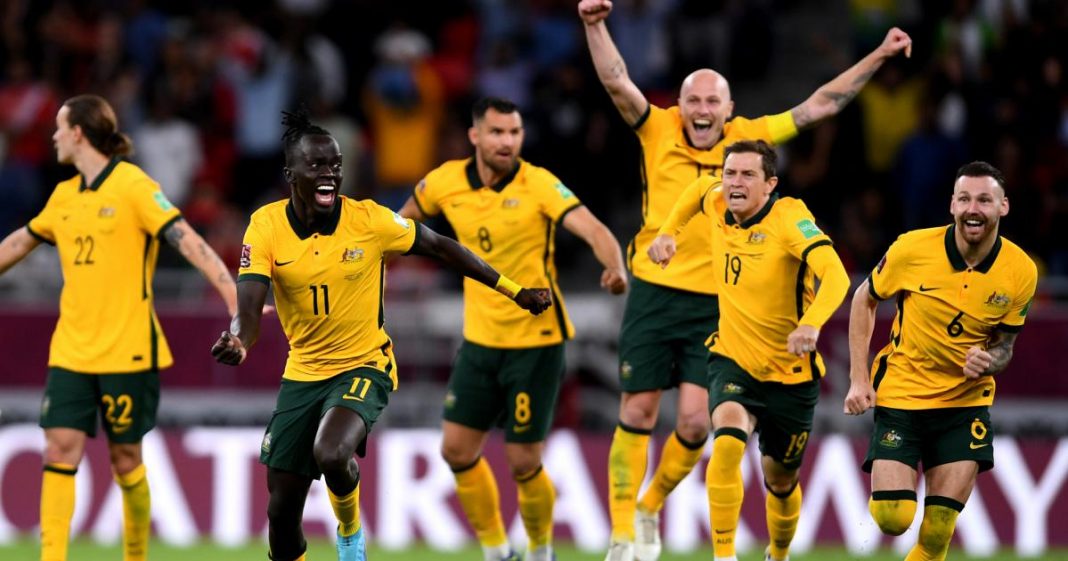 Australia has qualified for their fifth consecutive World Cup with an extraordinary 5-4 penalty shootout win after a 0-0 draw against Peru in Doha Qatar.

Substitute goalkeeper Andrew Redmayne, who was brought on for captain Maty Ryan solely for the shootout, made two saves, including the winning one, to send the green and gold to Qatar 2022 against all the odds.

PENALTY 8: PERU SCORES – Redmayne gets a hand to Tapia’s shot but it goes in. 3-3 after eight penalties.

PENALTY 6: PERU MISSES – Advincula’s shot is saved by Redmayne and hits the post. 2-2 after three penalties.

PENALTY 5: AUSTRALIA SCORES – Goodwin lashes the penalty into the roof of the net.

PENALTY 3: AUSTRALIA SCORES – Mooy scores to keep Australia in it.

121st min: There is three minutes of added on time.

120th min: Socceroos captain Mat Ryan has been taken off for Andrew Redmayne, with penalties in mind.

119th min: Penalties only two or so minutes away. What a nerve-wracking

116th min: Cueva, who appears to be struggling with cramp, comes off for Valera. Only four minutes to go.

113th min: Australia have a set piece from deep. Hrustic swings in a decent ball but Peru head clear. Not much time left here. Penalties are looming.

110th min: From a long throw, Irvine nods the ball into the danger zone in the penalty area. Mabil has space to get a shot on goal but he scuffs it wide.

106th min: POST – The Peruvians strike the post with an effort. Floresi shot from a tight angle after a scramble hits the upright with Ryan beaten. That was close. Australia hanging on. This is going down to the wire.

HALF TIME-EXTRA TIME: AUSTRALIA 0-0 PERU – The two teams change sides and we go again for the final 15 minutes. Will the deadlock be broken?

103rd min: Nerves are really jangling now for both nations. It’s all on the line. Nearly four years of World Cup qualifying is down to the next 20 minutes or so.

99th min: Edison Flores has a snap shot from quite a distance but it’s straight into the arms of Ryan.

98th min: Game has opened up. But still no clear cut chances. Both teams having dangerous incursions.

Extra time: The 30 minute extra period is now underway. We will have penalties if the deadlock isn’t broken.

FULL TIME: AUSTRALIA 0-0 PERU – We go to extra time in Doha despite Australia’s dominance. If extra time doesn’t sort the result, we will go to penalties.

92nd min: There is a slight shove on Irvine in the box but VAR doesn’t feel it’s enough to alert the referee.

90th min: There will be three minutes of added on time before we go to extra time – if the deadlock is not broken.

88th min: CHANCE – Mabil keeps the ball in down the left. He feeds Hrustic in the penalty area, but his first time shot is just held on to by Gallese. If he spilled it, two Socceroos were on the spot to tap home. That was so close.

87th min: Australia bring on striker Jamie Maclaren, with Mathew Leckie going off. The green and gold going for the win.

85th min: Behich makes a slaloming run through the attacking midfield area. He gets to the edge of the area, but fires a low shot wide of the right post on his weaker right foot. What an unlikely hero he would have been.

84th min: Mabil finds space down the left. He swings in a dangerous cross through the six yard box, Peru scramble it clear but Leckie was close to making contact.

82nd min: We are getting closer to extra time. Can either nation break the deadlock in the last 10 minutes?

81st min: Hrustic has a crack from 45 yards but it goes straight into the arms of Gallese’s arms.

80th min: Still no clear cut chances for any team. Australia with a dangerous free kick though…

69th min: Cueva attacks through the left side of the box. Australian defenders back off him. But the Peruvian winger lashes into the side netting.

67th min: Despite both teams having decent attacks, neither goalkeeper has had to make a save yet in the second half.

64th min: The momentum seems to have swung toward Peru in the last five minutes. The South Americans having several dangerous incursions but the Socceroos’ defence just managing to repel them.

58th min: Mooy swings in another dangerous corner but Gallese comes out to make an acrobatic punch. You feel as if Australia’s best route to goal is a set piece.While Peru’s is on the counter.

56th min: The Peruvians have a couple of dangerous attacks but the Australian defence does well. The South Americans do look more dangerous on the break this half. But Australia appear to still just be on top.

53rd min: Mooy receives the ball in space outside the area, but his low drive rolls wide of the left post.

50th min: Peru have back-to-back corners. But Australia manage to deal with both. First Irvine heading clear, then Rowles.

48th min: Peru lose the ball playing it out from the back. Mooy has space briefly but can’t find an option before being shut down. Good pressure from the Socceroos initially.

Second half: We are back underway in Doha. Can Australia maintain their high level in the first half? Or will Peru step it up?

HALF TIME: AUSTRALIA 0-0 PERU – The Socceroos have the better of a first half with not a huge amount of chances for either team. Can the green and gold step up when the South Americans raise their game in the second half?

Still scoreless as we past the hour mark.

46th min: There will be one additional minute of added on time.

45th min: From a deep free kick, Wright gets out the back, goal-side, for the flick, but is deemed to be offside. That was an interesting moment. Australia look dangerous from set-pieces.

43rd min: Boyle once again drives a dangerous cross through the area but Peru just manage to clear for a corner. Boyle has been the most dangerous player on the park by some distance.

40th min: Hrustic drives into space once more, feeds out right to the dangerous Boyle. The winger hangs up a cross to the middle of the penalty area, Irvine again wins the header but can’t get any pace or direction on it.

34th min: The Socceroos are giving the ball away too easily in recent minutes. It seems Graham Arnold’s team is starting to tire. It’s now a really crucial period leading into half time.

29th min: Peru have started to settle into the game the last few minutes. You feel as if they are set for a good period to end the half. Australia really went for it early but couldn’t get a breakthrough.

25th min: Australia has been doing most of the attacking in this first half. There hasn’t been a huge amount of clear cut chances. Game is being played at a good pace however.

20th min: Boyle darts in between two defenders on the right. He gets into the box, flings a cross through but Duke can’t quite get there.

Boyle on the burst to create a chance for the @Socceroos 💨#AUSvPER pic.twitter.com/VMzYYaIKjT

16th min: Australia win a corner. Mooy swings it in, Irvine gets his head to the ball first but it balloons over the bar.

13th min: From the resulting free kick, Mat Ryan comes for the cross, then retreats, but the Socceroos scramble the ball clear before Peru can get a shot away.

12th min: YELLOW CARD – Nathaniel Atkinson goes into the book for tugging the shirt of his opponent.

11th min: Been a reasonable start by the green and gold. Plenty of energy and verve in their efforts so far.

7th min: Duke gets another half chance on goal after twisting and turning at the top of the penalty area, but it’s another misdirected shot.

5th min: Rowles is beaten at the front post to the cross but the Peruvian attacker’s header drifts harmlessly into Mat Ryan’s hands.

3rd min: Australia start well with a high press. Duke has an effort at goal from long-range but it’s complete harmless for the Peruvian keeper to deal with.

Kickoff: We are off and running in Doha. Who will reach the World Cup? Australia or Peru?

20 minutes until kickoff:  “It won’t be any type of distraction,” says Socceroos boss Graham Arnold about the fact that the stadium will be taken over by Peru fans:

Socceroos coach Graham Arnold chats pre-game about calming the storm of Peruvian fans in his sides must win match this morning#AUSvPER pic.twitter.com/txuumQN2mJ

20 minutes until kickoff:  Here’s the breakdown of both lineups.

We break down the Starting XIs for @Socceroos and @SeleccionPeru and pin-point the danger men for each side.#AUSvPER pic.twitter.com/dnxuJNrgCV

30 minutes until kickoff: Atmosphere is already electric for warmups:

45 minutes until kickoff:  Peruvian fans will be loud tonight:

Peruvian fans out in Doha in full force! Peru face Australia at Ahmad Bin Ali Stadium tonight for a place at #Qatar2022 pic.twitter.com/aYhf650bOf

60 minutes until kickoff:  Both nations are going for their sixth World Cup appearance. The full list for each follows below:

90 minutes until kickoff:  Here’s a four-minute preview of the match by Australia’s Optus Sport:

“Peru has players in Europe. Australia’s best plays in Frankfurt, and the rest don’t count…” 👀

The Socceroos against South American opponents to get to the World Cup. We’ve seen it before.

2 hours until kickoff: Welcome to Sporting News’ live blog for this do-or-die World Cup play-off match! Will it be Australia or Peru booking their ticket to Qatar 2022?

Graham Arnold makes one change from the 2-1 win against the UAE with Mitchell Duke coming on for Craig Goodwin at left wing.

The injury concerns for Peru leading up to the match were real because Yoshimar Yotun, Marcos Lopez and Pedro Aquino are not in the starting lineup. Christofer Gonzales, Miguel Trauco and Renato Tapia take their place in the XI.