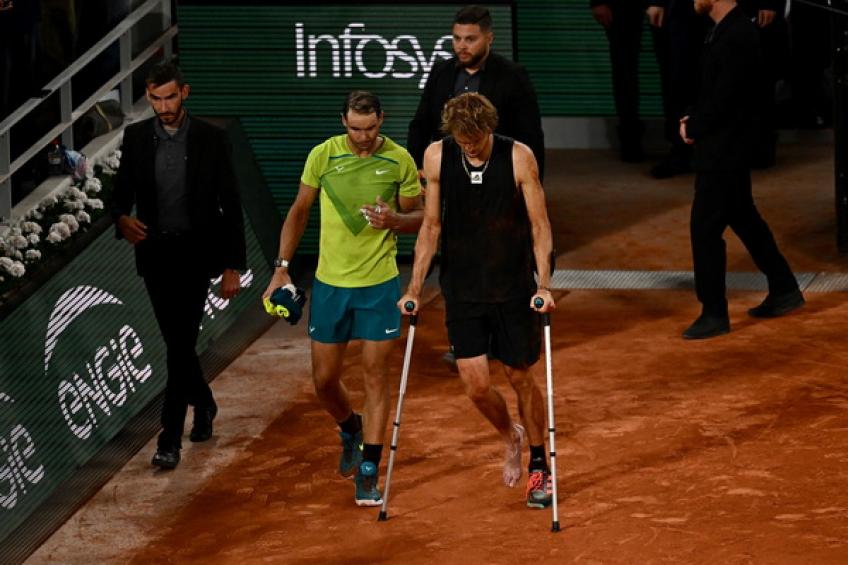 Rafael Nadal and Alexander Zverev battled against each other in the first Roland Garros semi-final. They were neck and neck for three hours and three minutes before Alexander experienced a terrible right ankle injury on slow and muddy clay.

The German left the court in the wheelchair and returned on the crunches a couple of minutes later to announce his retirement and send the Spaniard into the final. It could have been one of the most entertaining matches in Roland Garros history, as Nadal led 7-6, 6-6 before Zverev got injured!

Rafa was hardly challenged harder at his beloved Major for two consecutive sets, even against his strongest rival, Novak Djokovic. The 13-time winner survived four set points in the opener and came from 5-3 down in the second to force another tie break before Alexanderfinished the match in the worst possible way.

It was an incredible battle under a roof on Court Philippe-Chatrier, as they both tried to impose their shots and raise the level in challenging conditions.

Alexander Zverev fought like a lion against Rafael Nadal before a nasty ankle injury.

The Spaniard had the edge in the shortest range up to four strokes, and the German erased that deficit in the mid-range and most advanced rallies. Both players claimed five breaks, and they grabbed almost half of the return points on a slow court.

Zverev was a more aggressive player, and he gave his 120% to stay in touch with the 21-time Major winner and forge the advantage in both sets. Alexander grabbed a break in the encounter’s opening game after Rafa’s backhand error.

Zverev served well in the opening three service games to open a 4-2 gap and settle into a fine rhythm. The German barely missed the first serve up to that point. It all changed in the eighth game when he made a couple of errors to bring the Spaniard back to the positive side.

Rafa took charge and created three set points on the return in game ten. Zverev survived all the efforts, defended break points and held after numerous deuces for 5-5 after 58 minutes. Nadal saved two break points in the 11th game, and he fell 6-2 behind in the tie break.

Suddenly, the Spaniard delivered his A-game to rattle off five straight points and extend the battle. Zverev fended off two set points at 6-7 and 7-8 before Nadal cracked a forehand down the line winner in the 18th point to steal the opener after 91 minutes!

The second set kicked off with four consecutive breaks, and Nadal lost serve for the third time in a row to find himself 4-2 behind. The Spaniard got broken twice from 40-15 up, and he had to work hard to get back into contention.

Zverev hit a double fault in the seventh game to lose the advantage before stealing the rival’s serve for the fourth time in a row and opening a 5-3 gap. Despite an apparent struggle, Nadal was ready to fight until the end.

He pulled a break back at the last moment following Zverev’s costly double fault, and they both served well in the following three games to set another tie break. It never came, though, as Alexander twisted his right ankle in the 12th game’s last point and retired a couple of minutes later.