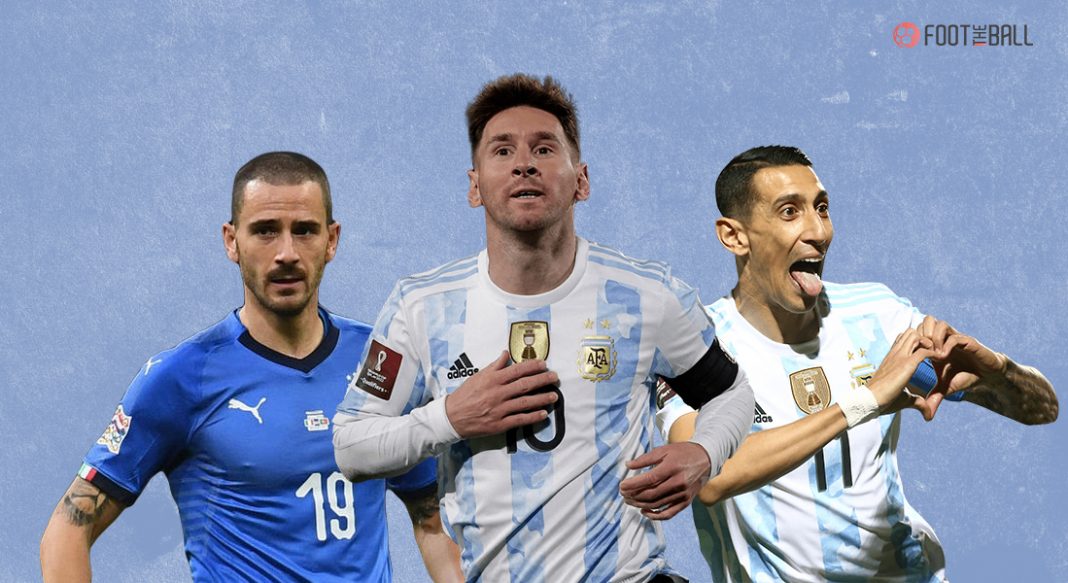 The European champions against the South American champions in Wembley. Italy were bidding farewell to Giorgio Chiellini while Lionel Messi looked for another trophy.

It was Argentina doing the early running, controlling possession and looking for opportunities. However, Italy survived the early onslaught before growing into the game. They were turning the screws, with Argentina under the pump and giving away fouls. Emi Martinez had a couple of saves, before Lionel Messi drew a save from Gianluigi Donnarumma.

It was Argentina who took the lead, after another dazzling run from Messi into the penalty box. He cut it back to Lautaro Martinez who had a tap-in from two yards out. Italy were trying hard to get back in the match, but Argentina remained on top.

And they doubled their lead in first half injury time. Martinez got free near the halfway line, before turning and setting off Angel Di Maria. The crafty winger casually dinked the ball over Donnarumma for the game’s second goal.

Italy responded by a flurry of changes at halftime, but the flow of the match remained the same. Di Maria was proving to be a menace down the right. His curling effort was pushed over by Donnarumma, before hitting a clean volley from a corner that was also saved. Messi was looking for his own goal, and tested Donnarumma twice too.

The match was slowly petering out towards the end as both nations seemed to accept the result. However, just like the first half, Argentina scored in second half injury time too. Messi’s superb solo run was halted at the edge of box, but the ball fell kindly to Paulo Dybala who angled his shot home. Italy were utterly deflated as Argentina ran out winners of the Finalissima 2022.

Here are the three key takeaways from the match:

Italy show no form in a drab outing

Roberto Mancini had masterminded the Euro 2020 triumph in stunning fashion, but the team has taken a severe downturn. Italy were comfortably outplayed over the vast majority of the match. The defence had no answer for a dancing Messi or tricky Di Maria. Donnarumma had several important saves to make in order to keep the scoreline respectable. Italy were growing restless as the match went on, resorting to cheap fouls and frustrated looks. Leonardo Bonucci had a torrid time in handling Argentina’s attackers, while the fullbacks were turned too easily all game long. The kind of performance that will make it clear why they are not in the FIFA World Cup in Qatar.

One of Lionel Messi’s finest outings in recent times. He carved up the Italians time and again, not least for the opening goal. In fact, all three of the front line had a great time running at the shaky defence. Di Maria should have scored more, while Martinez muscled Bonucci all match long. The midfield was unable to assert themselves on the match, while the strikers barely had a whiff. Lionel Scaloni will be incredibly pleased with how the performance turned out, as the defence was disciplined all throughout. They should have scored more, of course, but the level play was exciting as it was pleasing.

Messi was really enjoying himself on the pitch, and no wonder. Having recovered from his injuries and illnesses, the maestro put in a masterful performance. The team has been really well molded to suit Messi, who is back to his excellent, unplayable self. The World Cup remains the ultimate dream for him and the nation. Argentina will start as one of the favourites, and this time, Messi has some solid help.