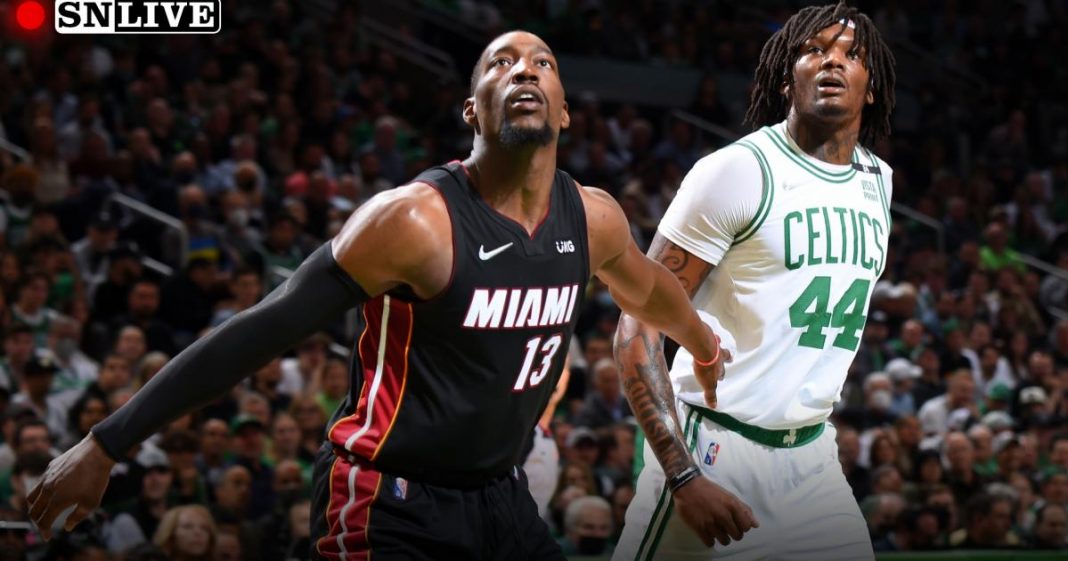 Another pivotal Game 5 is upon us.

With the Eastern Conference Finals tied at 2-2, the Celtics travel to Miami to take on the Heat for a series-altering matchup.

I’m sure you’ve seen the stat by now: teams who win Game 5 in a best-of-7 series that is tied 2-2 go on to win the series 82 percent of the time. With that being said, the Celtics did drop Game 5 to fall in a 3-2 hole to the Bucks last round, only to win two games in a row to advance to this stage.

The Heat face the pressure of possibly having to head to Boston with their season on the line if they can’t take care of business at home, while the Celtics look to avoid falling into another 3-2 hole.

Will Miami defend home court and put itself one win away from a return to the Finals? Or will the Celtics return to Boston with a chance to end the series in Game 6?

The Sporting News has you covered with live updates, highlights and more from all the action.

10:17 p.m. — Boston has punished the Heat in transition in the third, snatching rebounds and getting easy buckets. The Heat have to do more on the offensive glass to regain control of the pace of the game.

10:10 p.m. — Here comes Jimmy Butler. He puts his head down and gets to the rim to give Miami their first field goal of the quarter. Boston leads 49-48.

10:06 p.m. — Max Strus heads back to the locker room. We’ll continue to monitor the situation.

Point Horford goes coast to coast for the and-1 bucket 💪#NBAConferenceFinals presented by Google Pixel on ESPN pic.twitter.com/l4VDRDmddZ

10:02 p.m. — Marcus Smart picks up his fourth foul early in the third quarter. He stays in the game.

10:00 p.m. — Grant Williams starts the second half for the Celtics, giving them a different look on offense with their perimeter players struggling so far.

After a scrappy first half, the Heat take a five-point lead into the break. It’s the first time in the series that the half-time lead has not been in double figures.

Derrick White (11 points) and Al Horford lead (10 points) lead the Celtics as their star duo of Brown and Tatum have combined to shoot 3-for-16 from the floor.

For the Heat, Bam Adebayo is making his presence felt inside. He leads the Heat with 10 points and five rebounds at the half.

9:34 p.m. — Derrick White is keeping the Celtics in this one. He’s got 11 points in 11 minutes, finding success working as the roll man in pick-and-roll actions.

9:32 p.m. — The Miami rims have been far from friendly early with both teams struggling from deep. Miami is shooting 3-of-16, while the Celtics have hit just 2-of-11.

9:22 p.m. — Duncan Robinson gets his first triple of the game. It will be interesting to see how much he’s used tonight after struggling to crack the rotation, not only in this series but through the postseason. Without Tyler Herro, his shooting could be a big factor for the Heat.

He covered a ton of ground to get from the paint to the corner to sway Gabe Vincent’s 3-point attempt. Nasty.

Robert Williams III with an incredible closeout and block.

Did someone say defense?

It was an old fashion scrap in the first quarter with Miami taking a slender lead. They shot 9-of-24, while the Celtics connected on 7-of-17 from the field.

9:12 p.m. — The Celtics did a great job in Game 4 limiting their turnovers to just nine. Through the first quarter, they’ve already turned the ball over six times, with Jaylen Bwon accounting for four of them.

9:03 p.m. — Oladipo fights through traffic for the layup to give Miami their first lead of the night 15-14.

Notably, that’s the first lead change in the series since the first quarter of Game 2 to and just the fifth lead change of the entire series.

Bam soars in off the Butler miss for the emphatic putback. After a sluggish outing in Game 4, Adebayo is off to a strong start at home.

8:52 p.m. — After missing their first six shots of the game, Jimmy Butler gets the Heat on the board.

8:50 p.m — It’s been a frantic start to the game for both teams as Robert Williams III gets things going with the first two baskets of the game.

First on the court tonight ⤵️

7:00 p.m.: The Heat announced that Tyler Herro (groin) is out for Game 5. Herro also missed Game 4 due to a groin strain.

#BOSvsMIA INJURY UPDATE: Tyler Herro (groin) has been ruled out of tonight’s Game 5 vs the Celtics.

7:00 p.m.: The Celtics announced that both Marcus Smart (ankle) and Robert Williams III (knee) will be available for Game 5.

What channel is Celtics vs. Heat on?

Game 5 of the Eastern Conference Finals will air on ESPN. Viewers can also stream Game 5 on Watch ESPN and Sling TV.

Viewers in the U.S. can stream every NBA Playoff game live on SLING TV. With the SLING Orange Sports Extra package, get $10 off your first month now with access to ESPN, ESPN2, ESPN3, TNT and NBATV. NBA Playoff games on ABC are simulcast on ESPN3, which is included with SLING Orange, available for $35 per month including $25 the first month for new subscribers.

MORE: Watch the NBA Playoffs on Sling TV (U.S. only)

Game 5 of the Eastern Conference Finals will tip off around 8:30 p.m. ET on Wednesday, May 25. The game will be played at the FTX Arena in Miami, FL.

Here is the full schedule for the 2022 Eastern Conference Finals.