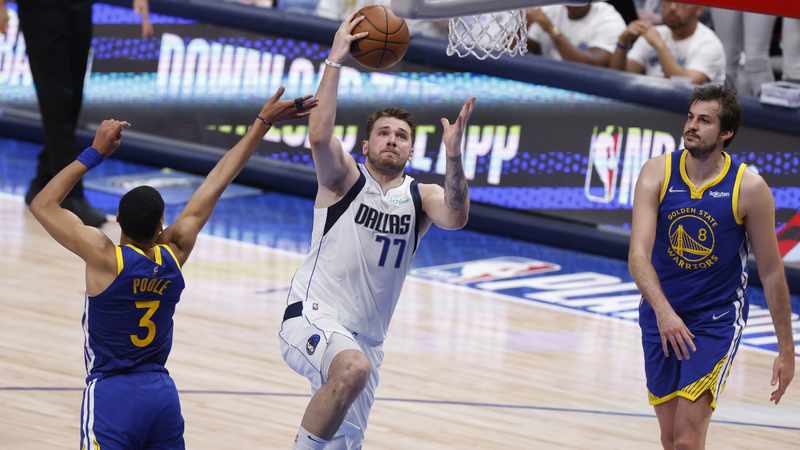 The Mavericks, needing a victory to avoid a clean sweep, delivered a revived offensive performance to ensure a game five in San Francisco on Thursday.

No team in the 75-year history of the NBA has ever come back from 3-0 deficit to win a best-of-seven playoff series.

But after Tuesday’s performance, the Mavericks have at least a lifeline to cling to as the series heads back to California with the Warriors needing just one win from three remaining games to advance to the NBA Finals.

Doncic, who has carried the scoring burden for Dallas in the three previous games, finally received scoring support from his team-mates on Tuesday.

Doncic however praised the defensive performance of his team-mates after a display which restricted Golden State’s leading scorer — Stephen Curry — to just 20 points.

“Our defense was amazing today,” said Doncic, who finished with 14 rebounds and nine assists.”That’s how we’ve got to play, when we play like this we’re a dangerous team.”

Asked if he felt the Mavs could still salvage a series victory, Doncic replied: “You never know. We’re going to stick together. It’s going to be tough, we know that but we have to stay together.”

Dallas coach Jason Kidd cautioned that the Mavericks remained only one defeat away from elimination.

“We believe it’s just one game at a time, we did our part tonight and found a way to win tonight,” Kidd said. “The next part is to find a way to win on the road.

“We can’t get ahead of ourselves. It’s still 3-1 and Golden State is a tough place to play. But we’ve won there before. We just have to take care of the ball and make shots.”

After being outplayed in the first three games by the six-time NBA champions, Dallas came out with a renewed sense of purpose at the American Airlines Center.

The Mavs led by 15 points at half-time after cutting loose midway through the second quarter with a 19-2 run that propelled them into a double-digit lead.

Golden State struggled to make inroads into that deficit and were successful on only three of 16 attempts from three-point range.

The Mavs by contrast drained 11-of-23 from beyond the arc in the first half, a statistic that helped them into a 62-47 half-time lead.

The start of the second half was delayed by around 20 minutes after what appeared to be a leak from the arena roof allowed puddles of water to gather at one end of the court.

But any idea that the delay would allow the Warriors to regroup quickly evaporated as the Mavericks continued to rain in buckets, outscoring Golden State 37-23.

That left Dallas 99-70 in front heading into the fourth quarter, with Dallas seemingly cruising to victory.

The Mavs were given a scare in the final minutes of the game as the Warriors bench players suddenly trimmed the lead to just eight points.

“It felt like we had a shot,” Warriors coach Steve Kerr said of the fourth quarter rally.

“But it wasn’t meant to be, Dallas was great tonight and deserved to win.

“They played with more force, and executed. This is the conference finals and that’s how it’s supposed to be — two great teams. And they handled us well tonight.”

Kerr meanwhile said the Warriors’ locker room had been subdued before the game as his team digested the horror of the Texas school shooting earlier Tuesday that left 19 children dead.

“There was an unspoken awareness of what happened today,” said Kerr, who had made an impassioned plea for stricter gun control laws in his pre-game press conference.

“It was a very quiet locker room beforehand. I felt like as a coach my job was get the team ready to play. But difficult to keep perspective on a day like day. The shock, the anger and the grief is there for all of our guys and I’m sure everyone in the building.

“But you just have to accept and go out and play and that’s what we tried to do.”