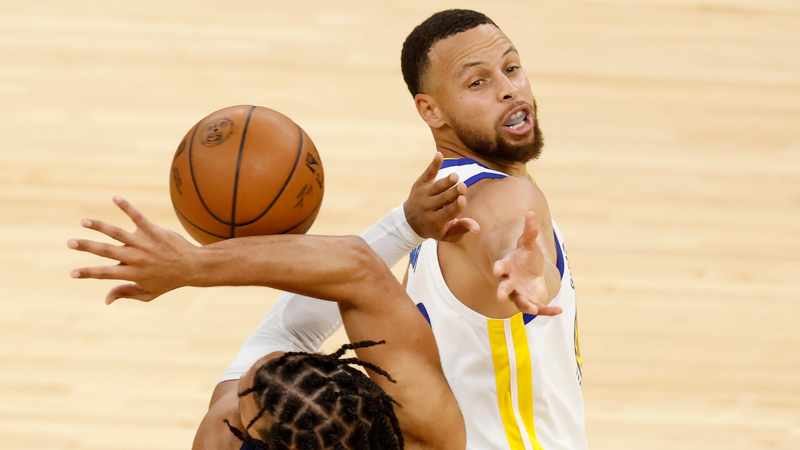 A pulsating clash in San Francisco saw the Warriors recover after trailing by as much as 19 points at one stage in the first half for a victory that leaves the six-time NBA champions 2-0 up in the best-of-seven series.

Curry may have led the Warriors scoring but the remarkable turnaround owed everything to a dogged team performance and shrewd second-half adjustments by Golden State coach Steve Kerr.

Looney in particular delivered with a career-high 21 points and 12 rebounds.

Kerr had urged his team to discover “poise” after a first-half Dallas onslaught.

“I told them that if we developed some poise in the second half that the game would come to us,” Kerr said afterwards.

“I thought we were so scattered in the first half, maybe emotionally more than anything. Dallas came out and punched us.

“We knew they were going to come out strong and they were fantastic. They played harder, executed better.

“We just needed to get poised and get the game under control. We felt confident that if we did that, they wouldn’t make 15 three-pointers in the second half. And that if they did, you just had to pat them on the back.”

Luka Doncic produced another high-scoring masterclass for Dallas with 42 points, five rebounds and eight assists, while Jalen Brunson had 31 points.

But the night and victory belonged to the Warriors, who had been left shellshocked by Dallas in a wild first half.

The Mavericks erupted for 72 points in the first two quarters that left them 14 points clear at the break, 72-58.

Reggie Bullock was also deadly from downtown, making four of out five attempts from three-point range in the first half.

The Mavs led from the outset, with Doncic putting them 5-0 ahead before a 13-0 run left Dallas 23-8 up with just a few minutes gone.

Stung into action, the Warriors produced a 13-0 run of their own to get back within three points at 26-23, but once again Dallas pulled clear with deadly long-range shooting.

Dallas made 15-of-27 three-pointers during the first half, almost double the eight-of-15 converted by the Warriors.

Doncic put the seal on an incredible display with a 29-foot three-pointer on the stroke of half-time.

But the momentum swung back towards Golden State in the third quarter, with the Warriors chipping away at the Mavs lead to close within two at 85-83 heading into the fourth quarter.

A three-pointer from Otto Porter Jr. gave the Warriors their first lead of the night at 86-85 early in the fourth quarter, and with their noses in front Golden State were not to be denied.

The Warriors outscored Dallas 43-32 in the final quarter to complete a thrilling win as the series heads to Texas for game three on Sunday.

Dallas coach Jason Kidd bemoaned his team’s tactics in continuing to shoot from three-point range in the third quarter. The Mavs made only 2-of-13 from beyond the arc in the third.

“We have to understand, when we shoot three or four threes in a row and miss, you’ve got to get to the rim and got to get the ball into the paint,” Kidd said.

Kidd noted that Dallas had trailed 2-0 to Phoenix in the previous round of the playoffs before recovering to win 4-3.

“We’re on the road against one of the best teams in the league,” Kidd said.

“It happens. They held serve. We’ve seen this in Phoenix so now we have to go back and just focus on game three and get ready for game three, understanding what’s at stake.”