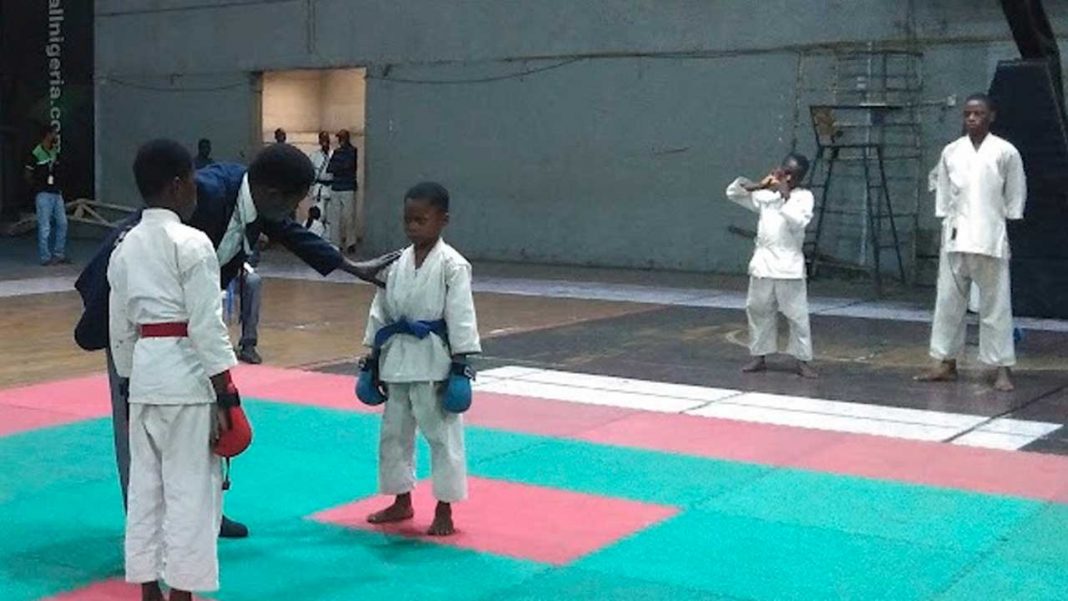 Adherents and practitioners of the Shito-Ryu style of Karate gathered over the weekend at the indoor sports hall of the National Stadium for the 2022 edition of their annual national championship and workshop.

Vice President, SKAN, Sensei Wilson Okon, revealed that Bai came to lead the workshop in furtherance of the relationship between SKAN and the Shito-ryu Karate Federation (WSKF), to which SKAN is affiliated. The workshop featured a large gathering of black belt Shito-ryu practitioners and participants from other styles and was geared towards reinforcing the fundamental techniques unique to the Shito-ryu style and equipping SKAN’s black belt members and instructors with basic techniques and training strategies for teaching the style to their students in their clubs, while ensuring uniformity in what is taught in Shito-ryu clubs across Africa; in line with WSKF’s mandate to drive the growth and development of Shito-ryu Karate in Africa.

Bai tasked SKAN’s chief instructor, Sensei Atagana Ramirez, to ensure technical points taught during the workshop are integrated into SKAN’s training programme to further reinforce the gains of the programme. The workshop served as a master class for all black belt Karate practitioners from all over the country as senior karate practitioners typically learn from different styles to deepen their knowledge.

After the workshop, the championship commenced as cadet and senior athletes from different Shito-ryu Karate clubs competed in different categories, in the kata and kumite contests, to compete for medals.

Director of Administration and finance, SKAN, Sensei Paschal Mac Brown, said the event was a valuable capacity building experience for practitioners, citing the direct impact the practice of Karate has on nation building, in developing well rounded citizens who are physically, mentally and emotionally balanced. Lamenting poor government policies as the bane of the growth of sports in Nigeria, he said, “There should be grants, incentives and provision of facilities to grow sports. We provide everything ourselves; we know government can’t do it all but let them even do the basic. We pay to use light at the national stadium and are charged per hour; we pay to use the facilities even though it is falling apart.”

“Nigeria likes fire brigade approach to everything, we never work or plan for competitions. The winners at the last Olympics started practicing immediately the competition ended but look at us here in Nigeria doing nothing. Two months to Olympics, government officials will come around asking how many medals we’re going to deliver for the country. The government doesn’t care about karate; we the lovers of the art have to do everything on our own to keep this sport alive. It pains me that these youngsters you see here today may never go on to become professionals because of finance. Five of our students here are the best nationwide and they compete locally and internationally and it’s all self-efforts amongst us.

“The best we have done is an appearance at the Pan-African games, we have never been able to compete at world levels, this is poor. We can make the next Olympics, maybe not win it but get to finals at least if government is serious.”

Sensei Okon said the purpose of the competition is grassroots development and attracting younger players to the sport. “Government knows what to do to develop this sport. In other parts of the world, everyone supports in one way or the other but here, we’re all focused one or two sports. We aren’t necessarily asking for money, government should make facilities standard, available and free for athlete’s use. My vision for my athletes is to win medals at the next Olympics; this is the lifetime dream for every athlete. facilities in Nigeria aren’t encouraging and even scare off potential investors.”

On his part, Bai said Karate has a lot of value to offer to athletes. “If well nurtured, these young karatakers here would go on to be very great in Nigeria, the sport has as a bright future.”

A parent and stakeholder, Emeka Tochukwu praised the discipline karate instills in young children and urged private organisations and parents to assist.

“Training, uniforms and kits being used are not cheap, this is an expensive sport and they need a lot of support. I saw that all the children were rotating one glove throughout, this is not good enough.”