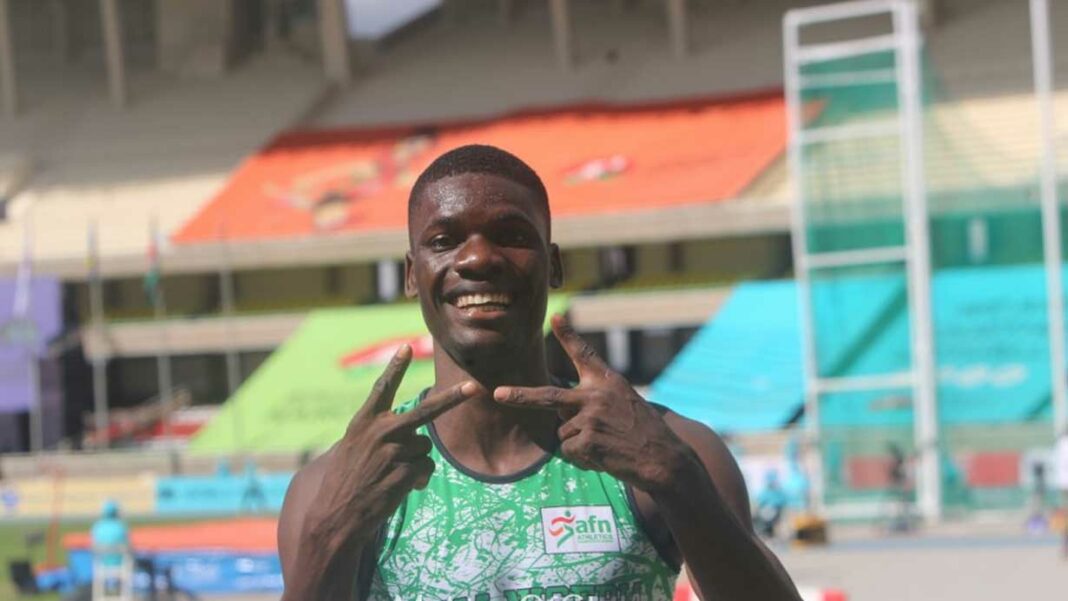 Ezekiel, who moved to the U.S. soon after representing Team Nigeria at the last U-20 Championships in Nairobi, Kenya, last year, competed for Baylor at his first Big 12 Championships. He stormed to a massive Personal Best (PB) of 48.42 seconds to break Amike’s National Record (NR) that was set in 1987.

The record qualified the young Nigerian for the 2022 Athletics Championships holding in Eugene, Oregon, U.S., between July 15 and 25. He also set a U-20 Lead, an NCAA lead and moved to fourth on the 2022 global top list.

With Amike’s 35-year-old record shattered at the weekend, only Yusuf Alli’s Personal Best record of 8.27 metres, which he set during the African Athletics Championships in Lagos in 1989, still stands as a Nigerian record.

In the build up to the Tokyo Olympic Games, long jumper, Ese Brume, broke Chioma Ajunwa’s African record of 7.12 metres, which gave (Ajunwa) the gold medal at Atlanta ’96 Olympics. Brume jumped 7.17 metres during a competition in the U.S.

The president of Athletics Federation of Nigeria (AFN), Tonobok Okowa, described Ezekiel’s performance at the Big 12 Championships as heart warming.

Former jumper and member of the AFN Technical Committee, Seigha Porbeni, told The Guardian in a telephone that Ezekiel would rule the world if he maintained his calmness.

Also at the same meet, another Nigerian, Rosemary Chukwuma, recorded a brilliant 10.88 secods to finish third in 100 metres, thus setting the fastest time by a Nigerian woman in 2022, just missing out on a PB owing to the wind reading at 2.4m/s. In the 200m, she clocked a big PB of 22.33s (2.0), the second fastest time by a Nigerian woman this year and sixth fastest of all-time nationally.

Imaobong Nse Uko became the first Nigerian quartermiler, either male or female, to qualify for the 2022 Championships in Eugene, Oregon, as she clocked a time of 51.24 seconds. She placed fifth in the women’s 400m, which was won by Stacey Ann Williams in 50.21 seconds.

Long jumper, Ruth Usoro, soared to a new PB of 6.78m (0.7) to finish second behind her teammate Monae’ Nichols, who leapt to a Lead (WL) of 6.97 metres. Usoro then struck gold in the triple jump, where she jumped 13.94 metres. Another Nigerian, Onaara Obamuwagun, landed a PB of 13.71m behind Usoro.

Despite having just two legal throws in his series, Chinecherem Prosper Nnamdi dominated the men’s Javelin Throw, grabbing a best of 77.98m ahead of his closes challenger, Texas Tech’s Markim Felix at 70.72m.

At the C-USA Championships, Alaba Akintola grabbed two gold medals, powering to a PB of 10.04seconds to win the men’s 100m, which bettered his qualification standard for the Championships. He secured the double with 20.36seconds in the 200m.