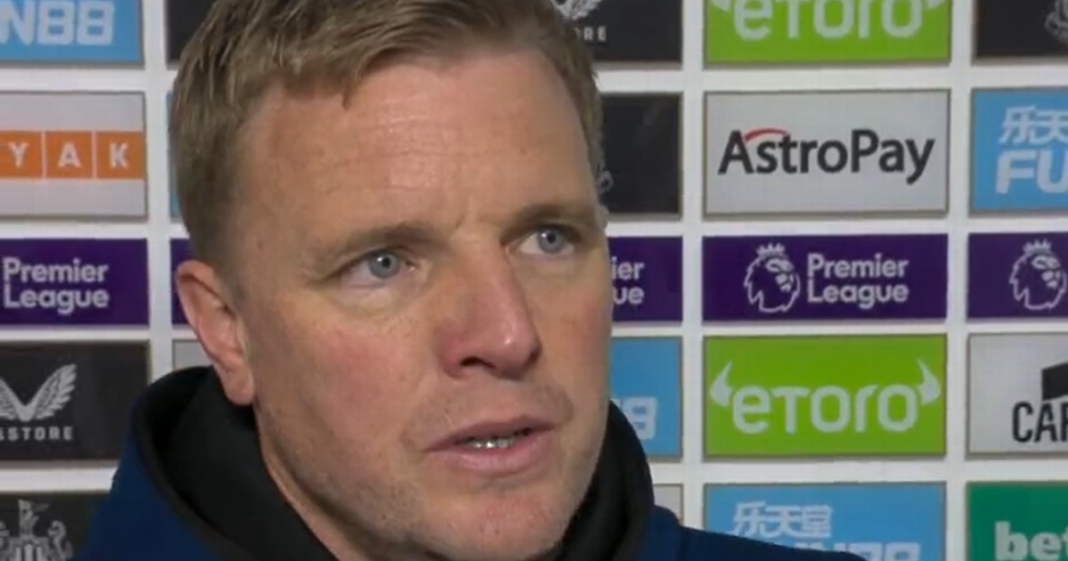 Newcastle secured a 2-0 victory over the Gunners on Monday night to all but end their hopes of a top four finish this season, as the Magpies climbed up to 12th in their final home game of the season

Newcastle United may have had nothing to play for ahead of Monday’s game against Arsenal but that didn’t stop them from all but ending their season with a 2-0 victory, in what Eddie Howe called his side’s “best performance” since his arrival at the club.

An own goal from Ben White and a Bruno Guimaraes strike secured all three points for the Magpies as they climbed up to 12th, while it left Arsenal in fifth and two points behind Tottenham Hotspur ahead of their final game of the season on Sunday.

And Howe has heaped praise on his side for their display and has credited their remarkable turnaround since the previous meeting between the two clubs back in November.

Speaking to BBC Sport , Howe said: “Big turnaround from that game [defeat at Arsenal in his first game in the dugout]. That was a really frustrating day. We left the stadium that day in a difficult moment. We knew we had a massive second half of the season. Luckily the players responded brilliantly to the challenge.

“This was the best performance since my arrival. The motivation was personal pride and performing in front of our supporters and leaving on a good note into the summer. We were very aggressive, good physically. It’s not an easy game, Arsenal are top quality. Credit to the players.

‘We knew this was something we hadn’t achieved – getting something against the top six. In the future we’ll have to compete against these teams. We have to have confidence we can win anywhere. This will help us today. A whole host of things have helped us turn the results around – unity, team spirit and January definitely helped with quality players coming in.”

How far will Eddie Howe take Newcastle next season? Let us know your thoughts in the comments section below.

It was a spirited display from the Magpies, who were playing in front of their own fans for the final time this season, in what has been a rollercoaster of a campaign in which they have gone from relegation favourites to a side pushing for a top half finish ahead of their final game this weekend.

Howe stuck with the majority of his core group of players for the St. James’ Park clash, and although the likes of Joe Willock, Jonjo Shelvey and Ryan Fraser were missing through injury, Sean Longstaff and Miguel Almiron stepped up, while there was a welcome return to the starting lineup for Callum Wilson, who was making his first start since December.

Allan Saint-Maximin once again dazzled on the left wing, while January transfer window signing and fan-favourite Bruno Guimaraes continued to prove what an incredibly exciting player Newcastle have on their hands, but Howe was keen to reiterate that it has been the whole squad who deserve praise for changing their fortunes around this campaign.

He said: “The mentality of the group, they were determined not to get relegated. The hardest thing for me this summer is to keep that [group spirit] intact while changing the dynamic of the group. There’s a massive connection between us and the fans. The minimum we can give them is 100% effort every time we play. That’s what they want to see. I think we’ve delivered that in the main.”

Despite failing to win any of their first 14 fixtures, and then just one of their first 22, Howe has managed to completely turn things around at the club during his six months on Tyneside, and the Magpies still have an outside chance of finishing in the top half of the table should they defeat Burnley on Sunday.

And it is for this reason that the former Bournemouth manager has been nominated for the Manager of the Season award, which is richly deserved. And on the subject of riches, should Howe get the desired backing once again this summer, it can only be imagined as to how far he can take this Newcastle side next season.