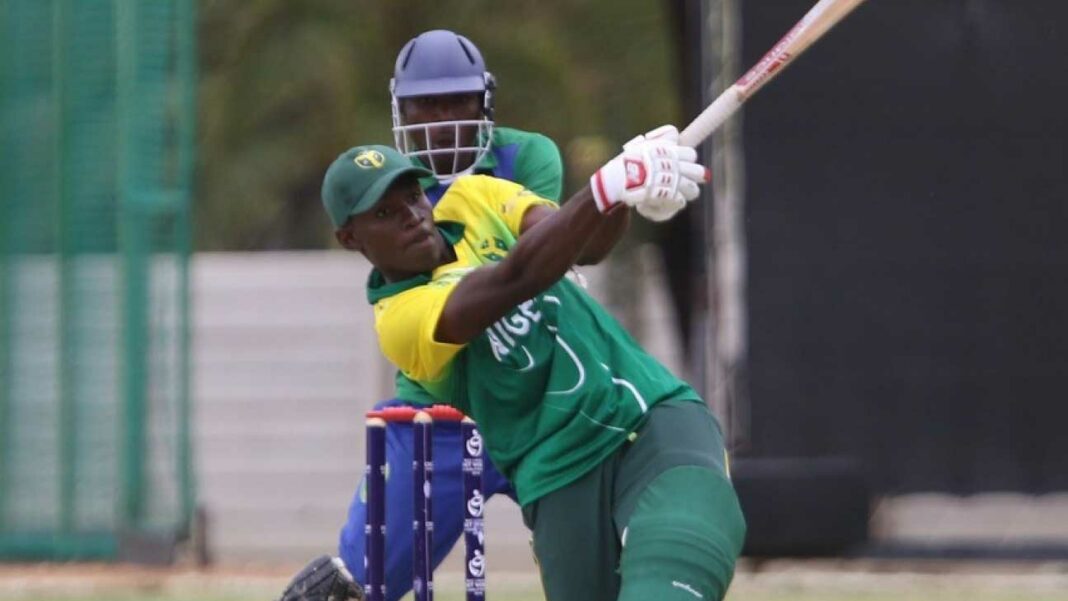 It is not every day that countries like Nigeria mark resounding marks in international cricket. It becomes even more astonishing when such marks are so recognised that compilers of the Guinness Book Of Records find it worthy to enter the global hall of fame.

Such is the recent accomplishment by 19-year-old Peter Aho, who has become the latest Nigerian to be recognised by the book for excellence.

There are, in fact, a few mentions of Nigeria’s sport achievements at any level in the Guinness Records, but none in cricket. But when the 2022 edition was updated recently, a singular entry from the achievement of Aho sent the cricket world buzzing about the biggest black nation in the world.

Sometime in October 2021, in a bid to jazz up the many developmental initiatives that the Nigeria Cricket Federation (NCF) has been rolling out in the past years, the federation staged a six-match bilateral duel with Sierra Leone, its most competitive West African neighbour.

The matches were a chiseling round for the senior men’s team, who were Rwanda-bound for another major challenge, but the demands from the event required the team to dig in for more.

Nigeria has always been the better side despite the tensed-up atmosphere that every encounter has proven to be. But the victories have not come without a number of slips that give the visitors opportunities to etch out wins and even stomp the host and make local fans palpitate. The ‘Saros’ were no pushovers and when given the chance they make the Yellow-Green sweat.

At last year’s encounter, Nigeria paraded a high-performance manager in Asanka Gurursinha, and by the fifth match the visitors, had leveraged a crack to steal a win that left the encounter at 4-1 in favour of the hosts.

“In our last match, it was not about winning again, it was a lot about justifying the works we have done, especially the input of the coach at this time,” says Aho.

It was a more respectable feat to conclude the series at 5-1 than allow the Sierra Leoneans to rise to 4-2. Both scores were wins, but a closing win was needed to lighten the atmosphere at the University of Lagos Cricket Oval and, especially, throw in a spark of confidence ahead the T20 Qualifier in Kigali, the coming week.

This was the set up before Aho was unleashed on the Sierra Leoneans.

Perhaps to get a better picture of the scenario, in 2019, during the International Cricket Council’s U-19 Cup qualifier, where Nigeria picked her first Cup qualification, to see the depth of Aho’s hunger for success.

This episode of his brilliance was set in Windhoek in July of 2019. The Nigerian team had just run through the Division Two qualifier with a string of wins and now pitched in Division One to compete for the sole ticket for the Cup that year.

Call it passion, talent, determination or a mix of the three, somehow, the Nigerian (U-19) team had taken out all the division one sides and needed a win to qualify for its maiden Cup. And, again, it was Sierra Leone standing on the way.

Nigeria fielded first and now resumed to chase down Sierra Leone’s 139 in the second inning. Somewhere, it was 91 for seven for Nigeria (U-19s) and it was Aho again, that owned the responsibility to do the dirty job of saving Nigeria by seeing off the remaining Sierra Leonean batmen on the crease.

He delivered deadly rallies of bowling that knocked off their hope and earned Nigeria her maiden Cup appearance in 106 years of Cricket.

In his element, Aho is one player any coach will love to have in his team.

So, at the University of Lagos’ Cricket Oval, matchday five of the six-match encounter, on Sunday, October 24, 2021, Aho became the subject again.

The match would have been an easy win, but was made difficult by the pressure to impress the head coach, the home crowd and the need to keep the visitors, who had no reason to hold back in their last match, in check.

The Yellow-Green began yielding to the pressure and struggled to leave an unimpressive 94 on the board and first inning batting.

“We had low totals before during the series, but always came back through our bowling strength. This one, I was bowling behind the opening bowler and after being rested for two games due to injury, what was ringing in my head was the coach’s instructions, to keep my bowling on the line,” he explained.

While the euphoria of the win enveloped the air, the weight of the performance only sipped in when world ruling body, cricket International Cricket Council (ICC), listed his performance as the best T20I bowling record ever, immediately the match ended.

Later, ESPN also listed him as a nominee for the Associate Bowling Performance of the year 2021 on account of his feat.

Now, it has received global acclaim with the endorsement of the Guinness Records in their updated 2022 edition, as the best T20i Bowling Performance in the world, a feat that has now put the NCF under the spotlight.

Speaking on the development, NCF President, Uyi Akpata, said despite the challenges, he believes the federation’s effort and massive investment in grassroots development have been key to unearthing talents like Aho.

“Peter Aho, Prosper Useni, the Isesele brothers (Akhere and Odion), among others, are kids that we saw take up the game for the first time in Benin City and they are all members of the national team in a few years due to the leverage the facility and the programmes has given us,” Akpata said.

“Talking about Peter, he has been an inspiration, and, pulling global attention at 19 is a great feat and good feedback to the numerous initiatives we have been putting in place at the federation,” he added.

Akpata agrees that Aho is an exceptional athlete, adding, however, that his prominence is a pointer to the many parts working together.

“We have many players inspired by his dedication, his feats and eventually the attention that his talent is bringing for the country… we are hoping we can leverage it to further our goals for the country. Aho is a good advertisement and ambassador for the cricket in Nigeria,” he says.

Aho is part of the 24-man list that the NCF has picked to execute its coming outings mostly lumped in the second half of the year. A student of University of Benin, Aho says the on-going lull in the academic circuit has left him with daily practice at the Edo Boys High School High Performance Center nets too.

The star cricketer is definitely just starting at 19, but there are more of him being churned out and growing in passion and potency. Seeing a locally groomed talent upstage big names and cricket heroes to become a world best in T20I bowling, shows that given adequate support and quality facility, Nigeria cricketers can hold their own against the world’s best.