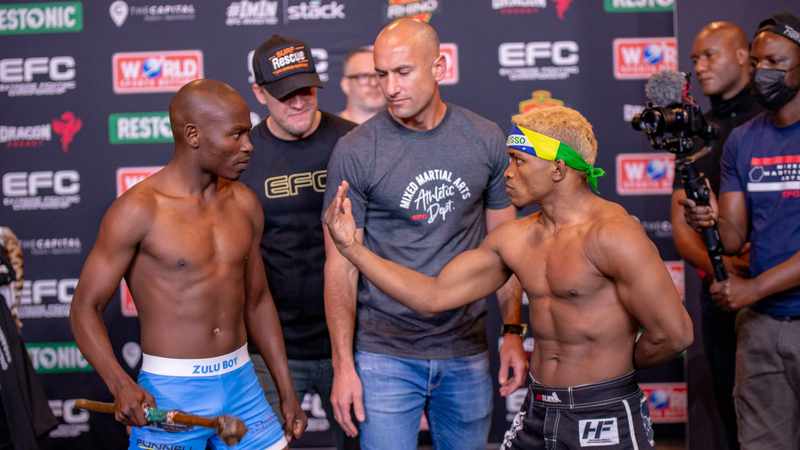 Cape Town – South Africa’s Nkazimulo Zulu (13-5-1) proved why he was champion material once again after turning the tide of a losing battle at EFC Fight Night on Saturday night.

Round one saw Souza come out hard with devastating and heavy counter right hands and left hooks that rocked the usually slow-starter, Zulu.

Souza was quicker on the feet and did more damage with his kicks and his fists in the opening exchanges.

Zulu suffered a cut to the top of his left eye and a closed right eye by the end of the first round. The Extreme Fighting Championship medical staff were close to calling off the fight due to the severity of Zulu’s injuries, however, he assured them that he was good to go.

Come the second round, Zulu, who was now on the back foot went for broke and came out guns blazing as he would need to gain the ascendancy after losing the first round convincingly.

Trying to slow Zulu down, Sousa eventually went for takedowns as it was clear he was struggling to keep up with the pace of his opponent on altitude. After landing a few blows that seemed to rock the Brazilian, Zulu was taken down, but a sneaky reverse saw the South African maintain the momentum for the rest of the second round.

Zulu kept pushing the pace and gained more favor with the judges as he took the top position in the grappling and wrestling exchanges, negating most counters or any form of real resurgence from Souza. The Brazilian landed a few decent shots but it was clear that the altitude had started to get the better of him. Souza struggled to keep up with Zulu’s work ethic as the Paulshof crowd got behind the South African, cheering him on.

Cue the third round, and with the fight still in the balance, Zulu – whose face had suffered way more damage, knew he had to make a statement in the final five minutes of the three-round fight.

He came out with a flying knee and seemed to rock Souza who at this point had absolutely nothing left in the tank. Zulu landed a few beautiful short elbows, overhand rights and cracking body kicks that echoed in the EFC Performance Institute. He did well to stuff Souza’s takedowns and soon got into top control for the remaining three minutes of the fight. From there it was all Zulu who kept working from Souza’s guard position. Souza tried to show the judges he was busy from his back, throwing shots at his opponent but it was Zulu who started to do damage to the face of Souza.

The fight eventually ended in a draw (29-28 Sousa; 29-27 Zulu; 28-28) which came as a surprise to some considering the domination by Zulu in the second and third rounds.

“Gian is a good fighter, he hits really hard, I was not expecting that,” said Zulu.

“I thought he was going to wrestle, but when we were down, he was quite heavy to bring up. I wanted to strike more, when he took me down I had to work more.”

Zulu felt that he deserved the win following that performance.

“If the second round was the decider, and the first round belonged to him … considering that I smashed him in the third round, I won that fight. It’s always the same when it comes to judges’ decisions for me, it never works in my favor,” said Zulu.

“I worked very hard to get this, I even lied to the doctor when he asked me if I could see through my eye, lol.

A rematch between these two fighters seems to be on the cards now even though both of them would like a rematch and a shot at the flyweight champion, Biko.