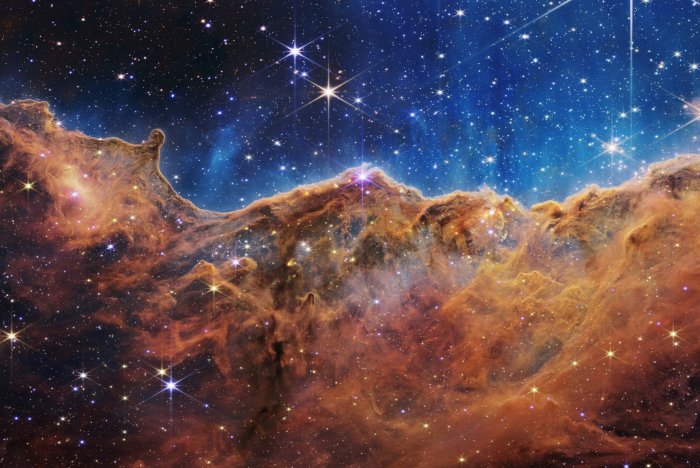 Macron and Harris were given the first preview of II ZW 96, a merging of two galaxies about 500 million light years away from Earth. Images of II ZW 96 were captured by the James Webb Telescope, which is part of an international project with partners from NASA, the European Space Agency and the Canadian Space Agency.

The swirling body of celestial activity is evolving in the Delphinus constellation near the celestial equator, which is an outward projection of the Earth’s equator.

II ZW 96 catches the eye with extremely bright infrared “tendrils” seemingly reaching out between the cores of the two galaxies. The luminosity or brightness of these wavelengths is 100 billion times that of the Sun, according to NASA.

Harris and Macron also saw a new composite image from the Pillars of Creation.

After witnessing the awe-inspiring images from the James Webb Telescope, Macron hailed it as a result of the partnership and shared objectives between France and the United States.

“Speaking about space is obviously speaking about science and having this journey imagined,” Macron said. “But this is also the story of great cooperation between our two countries.”

“We decided together to strengthen this cooperation and launch a strategic dialogue on space. We want to work closely together indeed on climate and environment as one of the key verticals where we do believe together we have a common objective.”

The longstanding coordination between France and the United States has seen many ambitious research projects come to fruition, notably the creation of the Argos system.

In 1978, the French Space Agency, NASA and National Oceanic and Atmospheric Administration teamed up to launch the satellite system as a scientific tool for collecting environmental and oceanographic data. The system transmits 3 million messages per day and is a key tool in monitoring the Earth’s ever-changing environment.

On Dec. 12, NASA and the French space agency Centre National d’Études Spatiales will embark on their next large-scale space project when the Surface Water and Ocean Topography satellite launches. It will be the first satellite mission to observe almost all of the water on the Earth’s surface from rivers and reservoirs to lakes and oceans.

Macron said France is enthusiastic about partnering on Artemis I, II and III as well. These missions will set the framework for humans to go deeper into space than ever before.

“As long as you can propose a French leader to fly to the moon quite rapidly we are quite happy with that,” Macron said.

The edge of a nearby, young, star-forming region, NGC 3324 in the Carina Nebula. Captured in infrared light by the Near-Infrared Camera (NIRCam) on NASA’s James Webb Space Telescope, this image, released on July 12, 2022, reveals previously obscured areas of star birth. Photo courtesy of NASA | License Photo