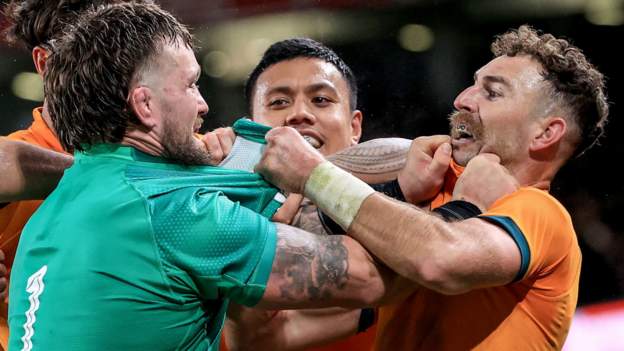 Byrne was drafted into the Irish squad minutes before the kick-off as Johnny Sexton was ruled out by a calf injury.

With Sexton out, Jack Crowley started at fly-half and his 10th-minute penalty was the only first-half score.

Bernard Foley levelled on 56th minute and after Bundee Aki’s converted try was cancelled out by Jordan Petaia’s score, Byrne won it for Ireland.

Foley had a late penalty chance to level from the edge of the 22 and opted to kick for the corner in order to chase victory but the move backfired as they conceded a penalty after winning the lineout.

The Aussies – after falling to a shock defeat in Italy last weekend – will wonder how they failed to beat the world’s top-ranked team after having 62% possession in the first half and looking the more cohesive side in attack throughout the contest.

Ireland’s win was a record-equalling 12th successive home victory but the hosts will admit that they got out of jail in this match.

The evening got off on the worst possible footing for the Irish as Sexton was ruled out after picking up his knock in the warm-up and Ireland’s subsequent efforts showed how vital the 37-year-old remains to their prospects of contending at next year’s World Cup.

Any invention, limited though it largely was, was produced by Dave Rennie’s Wallabies in the first half as they thought they had taken a fourth-minute lead – only to see scrum-half Nic White’s sniping score ruled out for Dave Porecki’s neck roll on Josh van Der Flier.

Crowley, making his first start after earning his debut off the bench in last week’s win over Fiji, had begun nervously after being bundled over in the move for the try that wasn’t, before settling his nerves with his straightforward 10th-minute penalty.

Foley soon missed a glorious chance to level but the Aussies continued to play all the rugby as Mark Nawaqanitawase’s burst threatened the Irish line before Andrew Kellaway’s knock-on saw another great opening being butchered.

The visitors’ effort were also hindered by indiscipline – notably replacement hooker’s Folau Fainga’a yellow card for yet another neck roll in the 37th minute which eased yet more pressure on the hosts.

After their first-half struggles, Ireland tried to raise their intensity after the break and Jamison Gibson-Park thought he had touched down in the 47th-minute only for it to be ruled out for Australian-born Mack Hansen’s foot in touch as he delivered the pass inside to the scrum-half.

Australia were briefly down to 13 men at that point due to the temporary absence of Fainga’a prompting uncontested scrums.

But the misfiring Irish were unable to exploit that advantage and Foley had the Wallabies on terms on 56 minutes as he atoned for his bad first-half miss.

Ireland regrouped to force intense pressure which eventually resulted in Aki – who had come on for Stuart McCloskey – burrowing his way through a sea of Australian bodies to score on 66 minutes, with Crowley adding the extras.

But Ireland’s seven-point lead lasted only five minutes as Australia finally got the try their enterprise deserved as replacement Petaia broke clear to cross wide on the right, with Foley landing the tricky conversion.

However, Byrne, who had only come on for Crowley, coolly kicked Ireland ahead again with a difficult penalty from near the right touchline and as Australia’s gamble of kicking for the corner in the dying seconds backfired – with Jake Gordon adjudged to have obstructed following the lineout – the hosts held on.