Barbra Banda back ‘with a bang’ for Zambia after eligibility row 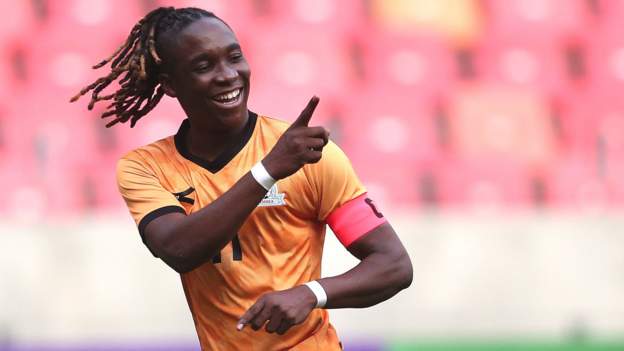 Zambia’s prolific striker Barbra Banda says it is “amazing” to be back in action for her national team after sitting out the Women’s Africa Cup of Nations in July in a row over eligibility.

With eight goals from just three games at the Cosafa Cup, the southern African regional tournament, Banda is making up for lost time in South Africa.

“It’s so amazing to be back in the Zambian colours,” the 22-year-old told BBC Sport Africa.

“I’m happy for myself and I think my team-mates are also very happy and excited.”

Banda is featuring competitively for Zambia, who have reached the Cosafa Cup semi-finals, for the first time since last year’s 2020 Tokyo Olympics, where she became the first player to score back-to-back hat-tricks in the tournament’s long history.

She featured in a friendly against South Africa in February but was then left out of this year’s Wafcon in July after she failed gender eligibility tests carried out by the Football Association of Zambia (Faz).

However, the forward was in host nation Morocco to support her team-mates, who finished third – a historic result given that they automatically qualified for their first World Cup on account of reaching the semi-finals.

Nonetheless, Banda admits that cheering from the stands was difficult at times.

“That wasn’t easy for me but, being a leader of the team, I was very determined about it because I realised that once I’m down, that team will also be down,” Banda explained to Sport Africa.

“I had to keep on pushing them and giving them morale, up to the end of the Wafcon, where we did good.”

Two months on, coach Bruce Mwape is still wondering how much further Zambia would have gone had Banda been allowed to play.

“I think if we had her in the in the team and we had happened to reach the finals, I think we could have won the Wafcon,” he told the BBC.

Banda was not even put forward as a squad member by Faz, whose interpretations of the tournament rules regarding her eligibility dissuaded them from entering her for the competition run by the Confederation of African Football (Caf).

China-based Banda is able to play in the Cosafa tournament because of a fundamental contrast in the regulations.

“The tournament rules for Cosafa are different from the Caf rules on eligibility – there are no requirements for gender eligibility tests,” Faz president Andrew Kamanga told BBC Sport Africa.

The impact of her return to the team has been instant, especially with several other forwards unavailable for the Cosafa Cup with commitments elsewhere.

Banda is currently the tournament’s leading scorer, with five of her goals coming during Sunday’s 7-0 rout of Lesotho.

“We are extremely happy to see her back in the team with a bang, we missed out a lot,” says Mwape.

“She’s one of our dependable players, especially up front. Now that we’ve got other players playing outside the country, we seem to be struggling with the striking force.”

Having finished top of Group A with maximum points, and eleven goals scored, Zambia will play Tanzania in the last four on Friday.

According to Banda, the Copper Queens’ fine Wafcon means there are hopes the country will lift its first Cosafa title this year.

“I think the expectations are very high because the performance that the team put in at Wafcon was so amazing,” Banda says.

“I think everyone now is looking up to us to have the Cosafa Cup. I also can’t wait to be crowned as champions for Cosafa.”

Meanwhile, coach Mwape believes winning the South Africa-hosted tournament will be the best preparation for their debut at next year’s Women’s World Cup in Australia and New Zealand.

South Africa, who won this year’s Wafcon, could stand in their way in the final, but the host nation is featuring a second-string side with the first team having twice faced Brazil this week.

“Going to the World Cup, I think we need to go with a winning mentality,” Mwape explains.

“If we lose this tournament, I think the morale might go down – but we can still win it.”