Asia Cup: Pakistan edge out India in a thrilling chase 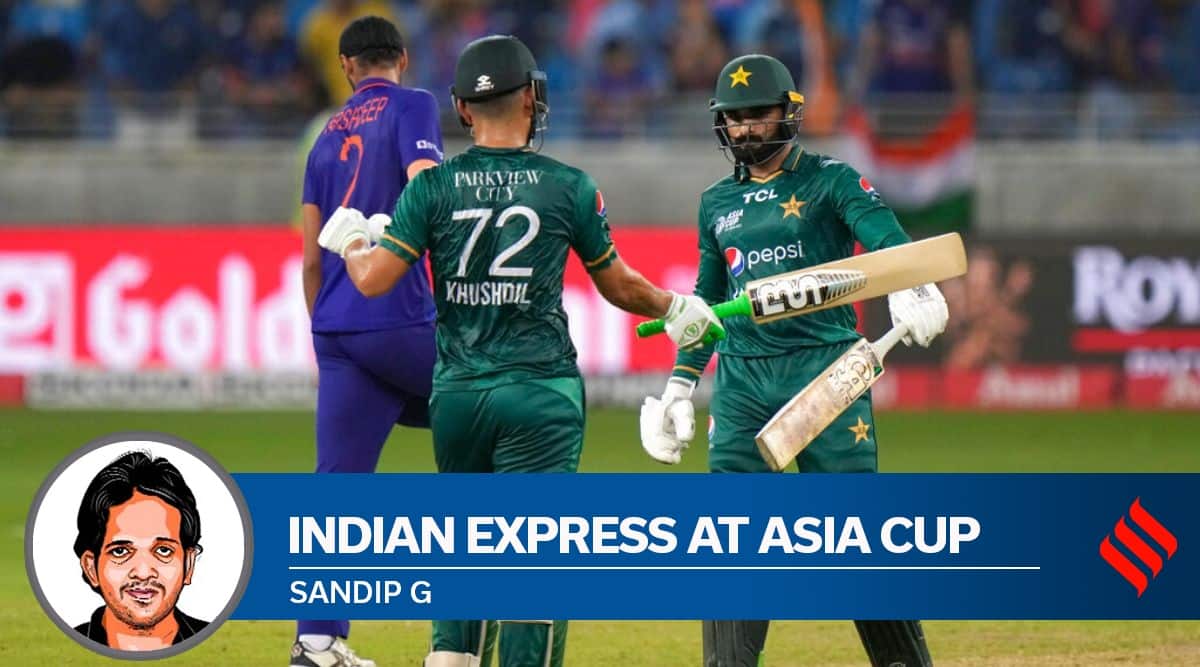 A late, final twist it seemed. Mohammad Rizwan, he of unflinching spirit and cool-eyed ruthlessness, seemed to be taking Pakistan to victory. But what are India-Pakistan encounters in T20s, from their twin games in the inaugural ICC T20, without late drama? Pounding hearts, sweaty fingers and jangling nerves. With Pakistan needing 35 runs off 20 balls, Hardik Pandya ejected Rizwan for a pugnacious 71 off 51 balls with a short ball. Hope rose among the Indian section of the audience, fear plunged among Pakistanis. The match could still drift either way.

The next few minutes were more dramatic. India sought a review for a caught behind off Asif Ali, off the bowling of Ravi Bishnoi. The players and the crowd, chewing nails, pulling hair, stroking chins, waited impatiently for the verdict on the screen. The three-minute wait seemed an eternity, and when the umpire withheld the on-field decision that there was no conclusive evidence to give him out, a section of the crowd breathed a collective sigh of relief; the other stood in speechless disbelief. This was not to be their night. For Pakistan, this was their night, their name written on the inky skies.

A more speechless moment arrived — one that convinced the Indian supporters the match was not theirs, there was no avenue for a comeback. Third ball of the 18th over, Arshdeep Singh spilled a sitter of Asif at short third man, much to the anger of skipper Rohit Sharma, who kicked the turf in anger in a rare outburst. Pandya and Bhuvneshwar Kumar had just pulled them back into the game but they had contrived to squander the advantage. Though India had 26 runs to defend in the last two overs, Ali plundered 19 off the 19th over to literally seal the match. Though Arshdeep Singh knocked out Asif in the last over, the breakthrough came too late.

The sign of a team that is still a study in progress and not one that is hurtling to invincibility.

Less than two months for the Cup, India are still prone to bouts of cluelessness. Passages of the game wherein they look utterly stunned, bereft of answers, ideas and imagination. Like when Rizwan shifted through the gears. As dangerous a batsman as he is, they fed him with too many loose balls, which ensured that he could score freely without embracing risks. Yuzvendra Chahal provided him with plenty of width to cut. Hardik gifted him with length balls on the leg-side, which he routinely demolished. Even the usually precise Bhuvneshwar let him off to a smooth start. Arshdeep was easy fodder for him as he hefted him for a fierce six over square-leg. Every stroke to the boundary seemed like a slash on India’s belief. Inch by inch, they surrendered, much before they had lost, on the penultimate ball of the game.

His confidence restored after the Hong Kong game, Rizwan controlled the chase with the finesse and mastery of a conductor at the London Opera. He knew which shots to play, and which not to; when to play them and when not to. He ensured that Pakistan did not panic after they lost Babar Azam and Fakhar Zaman. After the Hong Kong game, he had said: “We would look to be brave and calm.” And so they were.

Perhaps, Rizwan would have been impossible to stop in this rampaging form. But worryingly, India were clueless in dealing with the promoted Mohammad Nawaz. As the left-hander strode in, they seemed shocked. And when he began to unleash his artillery of strokes, India were not just caught off-guard, but seemed frightened, as though they did not have a plan for him. Nawaz comes with a reputation of clean hitting — in interviews he proudly talks of his batting, and to back his claims, he has a T20 strike rate of 124 and five half- centuries — and he enhanced his reputation with a torrent of boundaries in his 20-ball-42, which was as central to Pakistan’s victory as Rizwan’s 71.

That’s that from another close game against Pakistan.

Up next, #TeamIndia play Sri Lanka on Tuesday.

“My batting is as important as bowling. I perhaps put more time on my batting than bowling,” he had once said.

There was a clarity in his hitting — it was not a blind, mad knock, but one where he leant on his percentage strokes. The swings were often down the line, and not across. The base was firm and the head usually still. “We needed 10 runs per over when I walked in to bat, so I knew I had to attack every chance I got. My mind was clear that I’d hit out at every ball in my zone. I didn’t try and overplay, which you sometimes can when you’re under pressure,” he said.

Perhaps, it was the possibility of facing two leg-spinners that encouraged his promotion. But he did not limit his destruction to the leg-spinners — he was especially brutal on Chahal, whom he carted for three fours — but extended the punishment to the seamers too. Hardik, the previous Sunday’s hero, was thundered over long-off, before he smashed him for two fours in three balls. The 63-run rummaging stand in 6.3 overs took the match inexorably beyond India’s grasp.

There was Nawaz to hurt India in every nook. He was Pakistan’s thriftiest bowler, conceding just 6.25 runs per over, pulling the plug on India’s pacy start, with a masterful control over his length. He prised out the precious wicket of Suryakumar Yadav before he swallowed Hardik at short third-man, lunging forward to grasp the ball that was dying in front of him. He then duly settled under Deepak Hooda’s skier too. Not surprisingly, he was adjudged Player of the Match.