‘My heart will forever be broken but love keeps me going’ 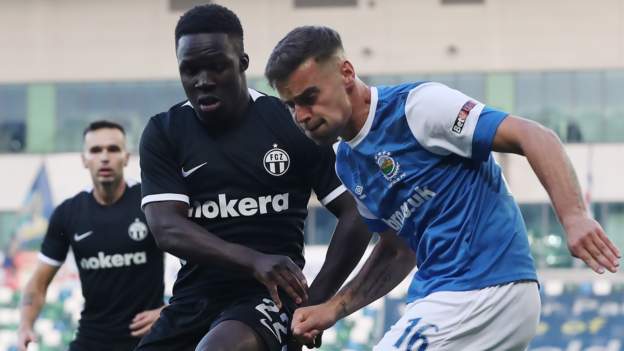 Linfield fell to a 2-0 first-leg defeat at the hands of FC Zurich in the Europa League third qualifying round at Windsor Park.

Tosin Aiyegun put the Swiss visitors in front on eight minutes with a neat finish from inside the area.

Robbie McDaid and Eetu Vertainen came close to levelling for the Irish team either side of half time.

David Healy’s side will travel to face the Swiss Super League champions for the return leg next Thursday, where defeat will see them drop into the Europa Conference League play-off round.

Linfield’s defeat came a week after they were knocked out of Champions League qualifying with an 8-0 aggregate defeat by Norway’s Bodo/Glimt, and the Swiss champions provided another stern test in Belfast.

Zurich made their presence felt as Aiyegun played a clever one-two with Antonio Marchesano and a clever backheel sent the Benin striker through to coolly slot past Chris Johns.

The Blues hadn’t faced a Swiss side since taking on Servette in 1985, when they lost 4-3 on aggregate, but they almost fashioned a response.

The ball sat up kindly for McDaid from a corner, but with an outstretched leg he couldn’t find get enough power to stab the ball home.

Jonathan Okita’s drive from the edge of the box then had Johns’ attention, but whistled past the post.

In the second period, Vertainen spurned a gilt-edged chance to restore parity from close range, before Linfield substitute Joel Cooper had a shout for a penalty.

But despite their efforts, the hosts were soon two goals behind as the highly-rated Gnonto got on the end of a clipped through-lob and poked past Johns with a composed finish off the outside of his right foot.

Stephen Fallon had the best chance to reduce Linfield’s arrears after a sublime run and cutback from Cooper, but couldn’t keep his shot down.

The Irish Premiership champions are now up against it in the return, but even defeat will still leave them with a chance of qualifying for the Europa Conference League.