Lizelle Lee: Batter felt forced out of South Africa ‘because of my weight’ 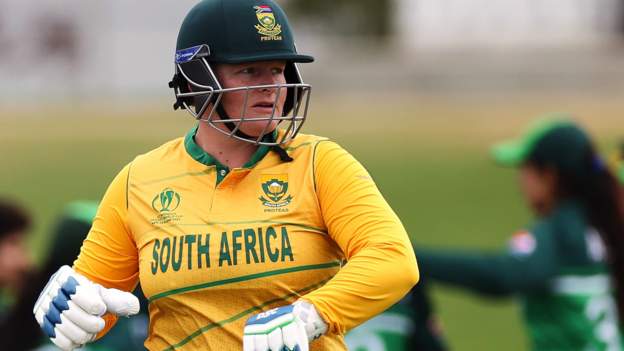 Former South Africa batter Lizelle Lee has revealed that failing a weight test was a significant factor in her decision to retire from international cricket.

The 30-year-old abruptly stepped down last month in the middle of a tour of England, missing one-day international and Twenty20 fixtures in the series after featuring in the sole Test.

Lee’s decision was all the more surprising given she had been named the leading women’s cricketer in the world in April, having also been crowned the best women’s one-day international cricketer for 2021 in January.

“I know I don’t look like an athlete but that doesn’t mean I can’t do my job,” Lee told the BBC World Service’s Stumped podcast.

“I looked like this last year and I had a brilliant year.

“I don’t feel good about myself. I don’t even look at myself in the mirror any more because I don’t like the way I look. But that comes along because every time I’m in (South Africa) camp, it’s always about my weight. Emotionally, it breaks a person down.”

Cricket South Africa (CSA) confirmed Lee was declared ineligible for the white-ball matches against England for failing to meet its workload and fitness standards.

‘As a woman, that breaks me’

Lee was asked by CSA to return to South Africa for further tests, with the threat that she could be denied a no objection certificate (NOC) to participate in domestic leagues around the world.

“Our contracts state that if you don’t make the fitness, they can pull your NOC,” she said.

“I told them you’re dropping me because of the way I look and how much I weigh. They said ‘No we’re dropping you because you failed the fitness battery’.

“But if you break it down, I made the fitness – the running – but I didn’t make my weight, so you’re dropping me because of my weight. As a woman, that breaks me. It’s probably one of the toughest things to hear, saying you’re not able to play for a team because you weigh too much.

“At night at home I would sit in my bed crying, thinking ‘What am I going to do about my weight?’. I’ve been struggling with this for so long.

“I called my agent and he asked what I wanted to do. They can’t pull my NOC for The Hundred because, financially, it’s a lot of money and we need it, especially with a young family, so I said I’m going to retire.

“They [CSA] said they’re really sad to see me go but if there’s no other way, then they respect my decision. There was no real thing about ‘What can we do to make you stay?’ or anything like that.”

Lee’s retirement from international duty allows her to play in The Hundred for Manchester Originals, and she has also signed for Hobart Hurricanes in the Women’s Big Bash League in Australia.

She admits she has struggled to control her weight throughout career, but says she did not received the support from CSA she required.

“They never asked me what I need to help lose weight,” she said.

“That’s something I’ve always done on my own. At the end of the day, it’s what you eat.

“I do my gym sessions. I do everything I need to do training-wise. I don’t know, I struggle with my weight. It’s been like that for I don’t know how many years.

“Emotionally that’s just so draining, and I couldn’t do it anymore.”

Lee was told in writing that CSA’s medical team would get in touch about a support programme it could provide to help her meet its fitness standards.

Her sudden decision to retire was a surprise, with her initial statement describing “mixed emotions” as she said she would focus on playing domestic T20 around the world.

Without Lee, South Africa lost three ODIs and three T20 matches against England, suffering an overall 14-2 defeat on points in the multi-format series.

“I think it came as a bit of a shock to a lot of people,” she said,

“I had it in the back of my head for a while but I never thought I would do it in the middle of a tour. It’s something that I never wanted to do because I’m letting my team-mates down.”

As things stand, Lee cannot see a way back into the international fold.

“I think management needs to be changed. A few people need to change, there has to be fairness across the board,” she said.

“I don’t think that will change overnight.”