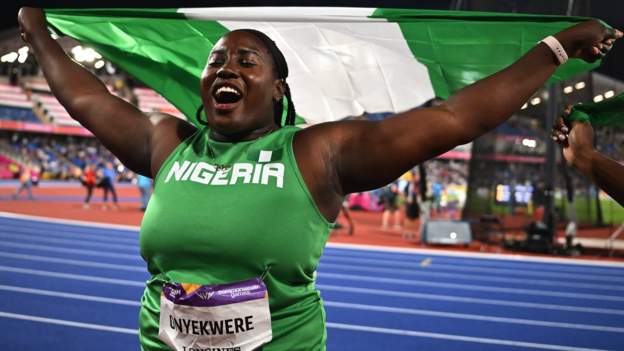 Chioma Onyekwere believes African athletes will make their presence felt in field events after becoming the first Nigerian woman to win a gold medal in the discus at the Commonwealth Games.

Onyekwere is only the second African woman to win Commonwealth discus gold after South Africa’s Elizna Naude in Melbourne in 2006.

“It is absolutely Africans’ time to shine – we deserve a spot and a seat on the table,” Onyekwere told BBC Sport Africa.

“I’m looking forward to having more Africans representing in the field events, especially in the throws. We are strong, powerful people.

“I’m expecting more for the future. We have World Athletics Championships next year, we have All-African Games. So I think Africa is going to do a really big step for the next couple of Worlds coming up.”

Onyekwere, who works full-time as an engineer, failed to qualify for the final at the recent World Championships in Eugene and was making her Commonwealth Games debut.

She improved on the mark of 58.19m she threw to become African champion for the second time in Mauritius in June.

“At the beginning of the year, I was dealing with an injury that I was struggling with,” she said.

“It was a hard circle to throw in at the Worlds, but I’m still grateful that I had the opportunity to showcase what I can do. Because I’ve known I’ve been able to throw far this whole time. I’m excited by what’s to come.”

Bronze-medal winner Amaechi said it was “a blessing” to represent Nigeria and pick up a medal on what was her senior competition debut.

“It’s a big deal for me to come out here, to have these experiences and get this exposure and to be part of this team,” the 23-year-old told BBC Sport Africa.

“Every single time when I step out, when I’m able to wear this green and white, I really just remember how special it is. It makes me proud to represent my people.”

Onyekwere added: “It’s amazing to come out for our first Commonwealth and both get on the podium and represent Nigeria well. It’s a great accomplishment.”

Golds for Uganda and South Africa

The 21-year-old set a new Games record of 27 minutes and 9.19 seconds to win ahead of Kenya’s Daniel Simiu Ebenyo, while Kibiwott Kandie, a half marathon specialist, took bronze on his international track debut for Kenya.

South Africa’s Chad le Clos, however, was surpassed as the most-decorated Commonwealth athlete in history, having won his 18th medal on Sunday.

The 30-year-old missed out on a 19th medal of his Games career as he finished fourth in the men’s 100m butterfly final, 0.21 seconds outside the medal positions.

Australian swimmer Emma McKeon instead won her 19th medal on Tuesday to move ahead of Le Clos and shooters Michael Gault and Phil Adams.

Earlier, Kenya’s African champion Ferdinand Omanyala and reigning Commonwealth champion Akani Simbine of South Africa both eased into the semi-finals of the men’s 100m – with the final on Wednesday.

Meanwhile, Uganda missed out on a place in the netball semi-finals after a 56-35 defeat by hosts England in a feisty encounter.